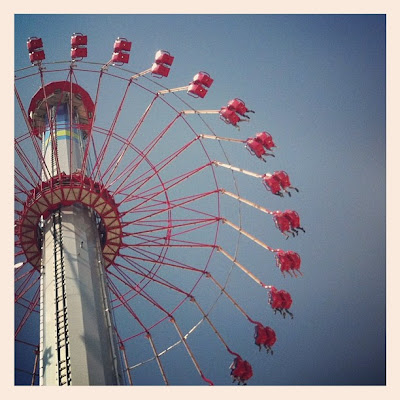 There was a summer, many years ago, when M and I were first dating. We met during our one and only overlapping semester in graduate school, but we opted not to date each other until we started living 560 miles apart. Those were long miles back then – on two lane roads for the most part. They’ve been widened and multiplied in the years since, but they used to take ten or more hours to traverse. Neither of us owned a cell phone yet. My father had one for work – a brick of a thing – and he would mail it to me just before a long trip home to visit. It’s funny to think of that now, because the cell coverage between my little studio apartment and my childhood home had very spotty service at best. The phone was for emergencies, but I suppose only for the emergencies that happened right near the center of the occasional towns my car would pass. There were no unlimited long distance plans then either, only the conversations that cost real money each minute, the kind that you held with one eye closed to make the voice on the other end seem closer…and one eye open, on the clock.
We wrote a lot of letters that year and the next one. And that summer, the one that I mentioned, we also drove a lot. Never together, but always towards one another. It was the summer of weddings. We were invited to eleven. We made it to nine. We would have done those other two, but three sets of friends chose the same Saturday, but not the same state. M was in many of those weddings, and many of those weddings were located in Iowa – small towns in every corner. He would print out road maps at work and highlight my route, and then mail them to me ahead of time. We would arrange a place to meet over the phone, and try to time our departures accordingly. Once we both left, there was no way to communicate until we arrived.
I would head north along unfamiliar highways and roads. The first time I crossed into Iowa it was over a single lane bridge at dusk. The road tipped up for a mile or two, and then I passed through this tiny little town named Argyle, and the sun was setting on the left, and there were corn fields all around and a biplane was dipping in and out just above the road. It was like a postcard to the heartland – brave new territory.
Massive amounts of friends would descend upon the chosen town, the Super 8, the Perkins – and we’d watch rehearsals and then eat rehearsal dinners, and then we’d do it all again the next day, but for real,  and in fancier clothing. Occasionally in all the hubbub of that summer we’d catch some quiet time, and I remember watching a show on the Discovery Channel about extreme roller coasters – their design and engineering, and the crazy people that travel from one thrill ride to the next. The show was fascinating and we noticed that many of the top ten coasters in the world were located at Cedar Point in Sandusky, OH. We made a pact that once we were off the wedding party travel circuit we would visit. 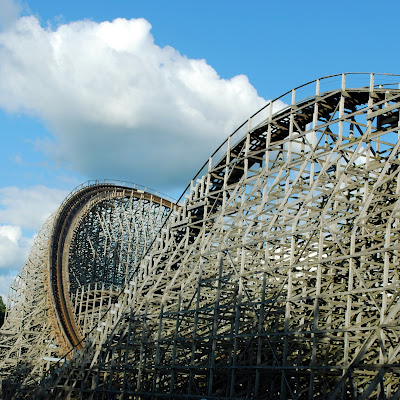 The ironic thing was, the very event that got us to Cedar Point that first time was a wedding. A friend from graduate school was getting married in Cleveland on the weekend of our fifth anniversary. We headed east and stayed in a beautiful hotel downtown, ate great food, danced and celebrated with many friends we hadn’t seen in ages, and then we added on a couple of days to the trip. It was time for some coasters, and we had done our homework. 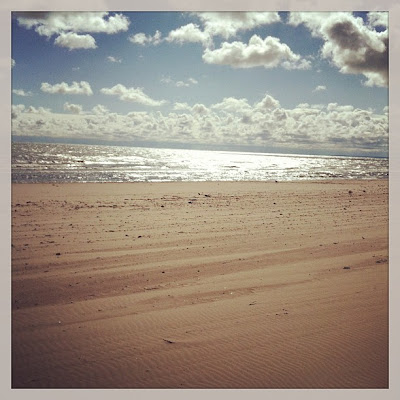 If you love roller coasters, then this is the park for you. It’s pristine, and located on a peninsula that juts out into Lake Erie. The views in every direction are beautiful. 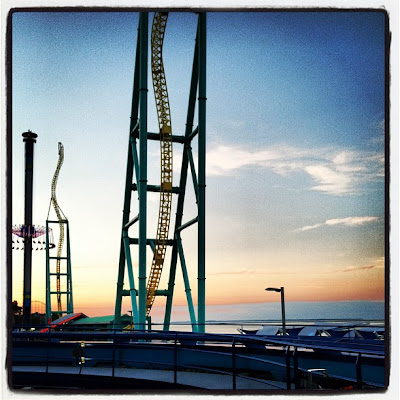 There’s this brief moment as the small train car you are strapped into starts to slowly mount that first steep hill when you look around you and marvel at just how gorgeous it is. And then you dig your fingernails into the bar in front of you as the scenery turns into a blur of steel and screams.
There are eighteen coasters on the property, despite the fact that the overall area of the park is fairly small. They wind in and out of one another, jockeying for space. We still love Millineum Force – considered by many to be the best coaster in the world. It’s located at the edge of the park, and the views from that first hill are amazing. And then you plummet over 200 feet at an angle so close to ninety that you can’t see the track in front of you, just the water. It’s amazing. The photo below is one I took through the sunroof of our car as we drove by on the narrow road between the water and the park, while a car was headed downward. 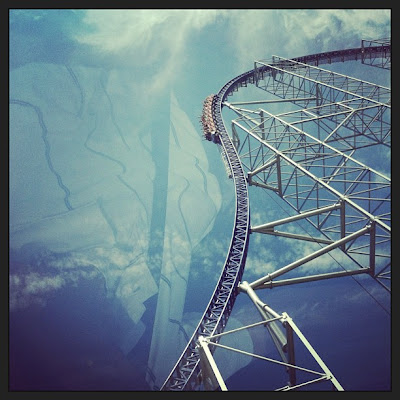 That first visit in 2005 was so much fun. We ran from coaster to coaster, bypassing every other ride offered at the park. The only exception was for the Ferris Wheel that we rode right around sunset. Spectacular. When we got tired mid-afternoon, we headed out to the beach for an hour, and dozed on towels under the sun before riding more roller coasters long after the sun went down. We are lucky that E loves coasters as much as we do – she’s pretty fearless and always game for anything. Now that she’s tall enough to ride even the most intense ones, we knew it was time for another trip back. 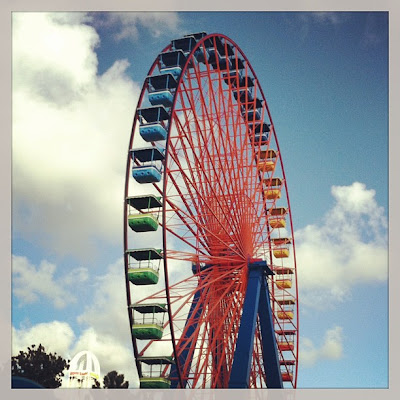 Cedar Point has this amazing option called a parent pass. It doesn’t cost anything extra – you simply fill out a card when you enter in the morning, and it’s perfect for families that have some kids that can coaster surf, and some that can’t. This is how it worked for us: E and her dad would get in line for a roller coaster, while F and I rode some of the smaller rides around the area. I’d get a text from M as they got onto the train platform, where they would hand that card over to one of the attendants just before they boarded the train, and F and I would head over to the ride’s exit. We could walk right up to the platform exit, and I would state my name to the attendant in charge of the parent passes. Then F and her dad would head back out of the ride, while E and I were able to get on the very next train. It’s a brilliant plan, really. I can remember in the past seeing families all waiting in line together, even with little ones. They would get to the platform and then jockey around in places so that they could stagger rides and pass the little kids at some point over the track to the other parent. This keeps the little kids out of line and away from the tracks completely, while not completely blowing your whole day waiting double time to ride each coaster. It’s a very sweet deal for the older kid who gets to ride twice – once with each parent. It definitely keeps the younger ones happy too – and I’m sure it makes the park a lot more money (we bought a lot of ice cream while we waited!). 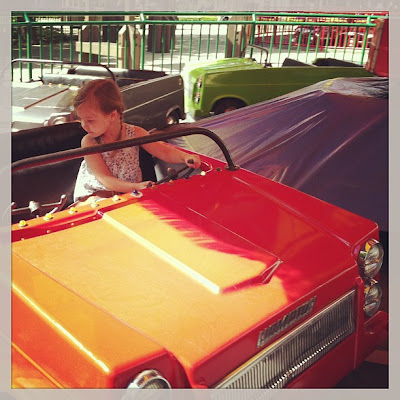 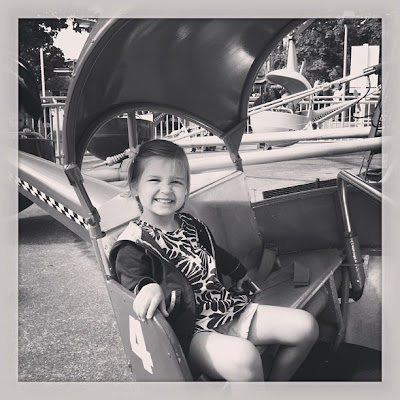 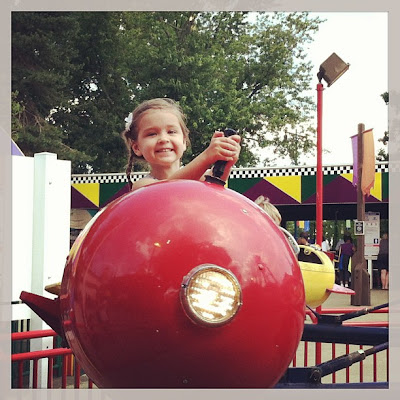 We opted to stay right on the peninsula, in one of the cottages along the shore of the lake. It was so much nicer than a hotel room – a little more room to spread out in, and a killer view from the front porch. The view from the back had the giant wooden coaster – the Mean Streak. Another benefit of staying on Cedar Point was getting to enter the park an hour earlier than the general public. They would start up five of the major coasters an hour early, and everyone lodging at Lighthouse Point would line up at the back entrance just before nine and then head out to get a couple of extreme rides in before the line waits got too long. Visiting on a Wednesday and Thursday in mid August was nice too – the crowds were low as many schools were already in session. Having a home to escape to for lunch or naps or bathing suit changes was really convenient. It was so much cleaner and quieter than I imagined it would be. Once we were on our porch, the hustle and bustle of the park seemed like it was miles away. The top half of the photo below shows our front porch view, the bottom half was the back view. 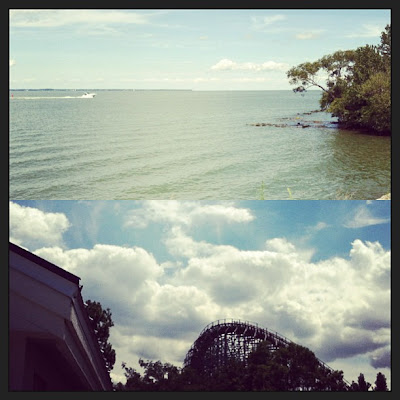 Ask the little one about her favorite parts, and she’ll tell you the Gemini Junior was a big hit, with the water slides and sand play coming in at a close second. 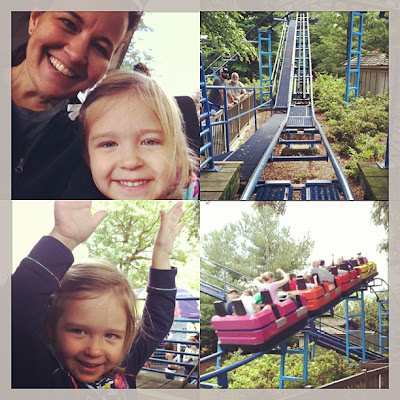 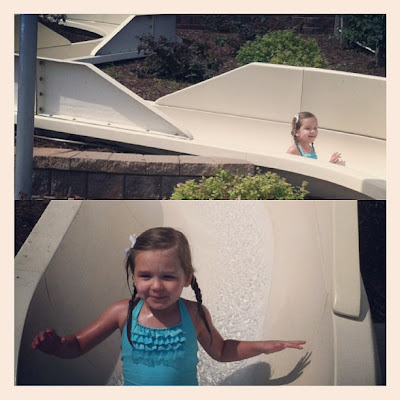 Ask E about her favorites, and she’ll list them all. The newest coaster – the Gate Keeper – was a popular hit, for sure. 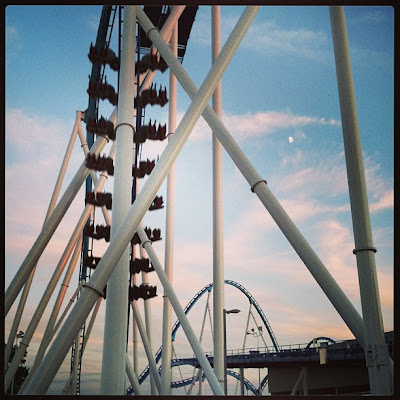 Ask M yourself – because I’m not sure what he loved most. Probably all of it, the faster the better. Or ask him about these seventeen seconds of insanity. I didn’t even document that nonsense.
Ask me, and I’ll tell you I loved watching everyone else having so much fun. But most of all, I loved climbing those big hills with this girl by my side. 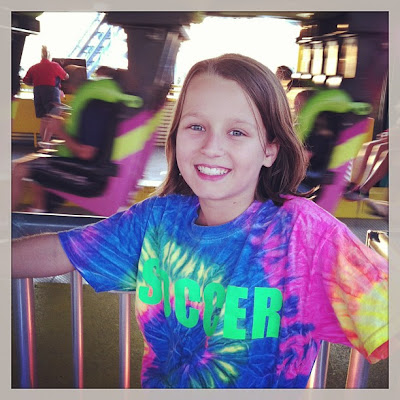 It was a little bittersweet that I couldn’t ride any rides with M – like we did those many years ago. But there will be time to do that again, I know. For now, I’ll take the Parent Pass life, any day.