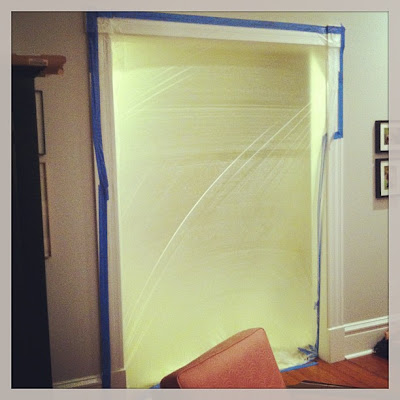 We’ve kicked project dining room into full gear. This is a tricky, tricky space to work in because it is in the dead center of our house and there is no way to close it off. It opens into a three story space that rises up thirty-five feet, and it houses the stair that we need to get from floor to floor. So this isn’t a place that you tackle in small pockets of time – an hour or two here and there. You’ve just got to go whole hog and do it. Now, think about last time you had time to go whole hog. Exactly. You can see why it’s been moving forward at a snail’s pace.
Not any longer.
Last weekend M and I discussed final light fixture locations based on our fixture choice. Which reminds me, we haven’t actually ordered those yet. I need to get on that, since they are now discontinued and only a few remain in stock.
M cut out the drywall and shifted the junction box locations. The original locations were roughed in way back in 2000 when we did the first electrical updates to the house. At that time we didn’t even have a stair in place, so the rough locations were exactly that… rough. Now that we are installing actual fixtures, it would be nice for them to be located an equal distance away from the stairs – not too high that they conflict with them, and not too low that we bonk our heads on them. We need some just right porridge here. 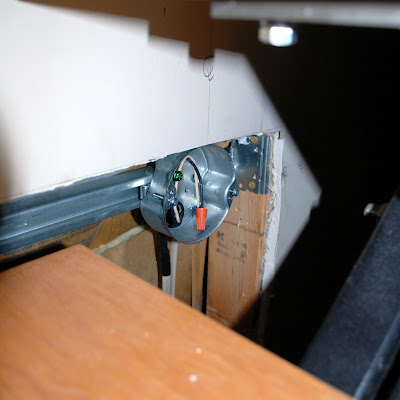 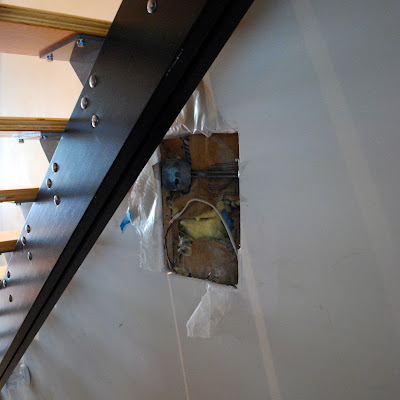 We ended up with some nice holes in the wall between old locations and new ones, so there was some insulation and drywall installation to do, followed by some patching… 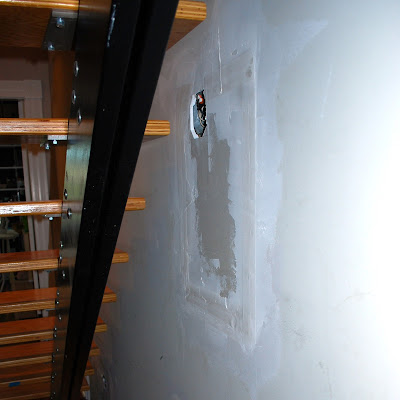 …and several coats of mud… 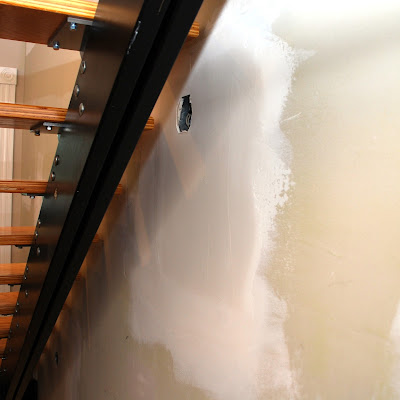 …in several locations. Side note: this requires removing actual stair treads that are attached to the floating stringers with some hefty, hefty bolts. Lots of them. Over the course of the weekend we’ve had various stair treads missing – sometimes three or four in a row. Occasionally M puts them back in with just enough connections to traverse – but not fully reinstalled. Hence the tape to remind him of the temporary fixes. Having a few of the treads out made me more excited about re-staining the treads a darker color and painting the stringers a dark gray color. I have a feeling that having to take them out made M less excited about that plan. 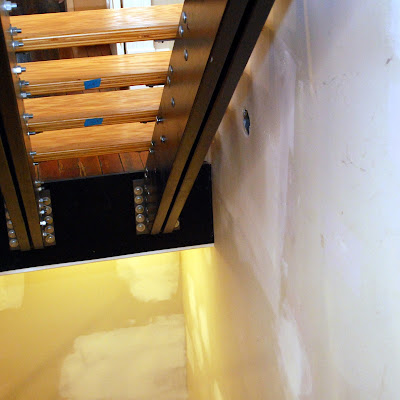 Just like in the living room, we decided that since we’re taking the plunge, we might as well start with a clean slate. If you’ve ever looked at the old pictures of this place, you’ll remember that every room in our house has also been a makeshift workshop at some point, so the walls are all pretty dinged up around here. Once M worked his wonders in the living room it was pretty amazing – but now we’re spoiled – we just can’t ever do anything as simple as breaking open a gallon of paint without doing some pretty major prep work first. 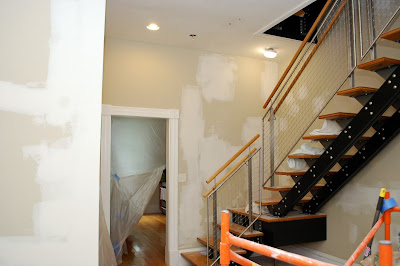 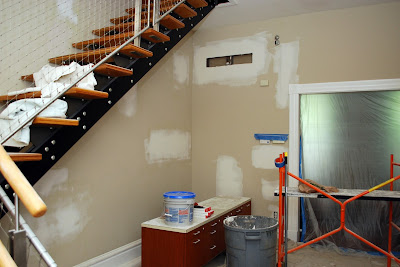 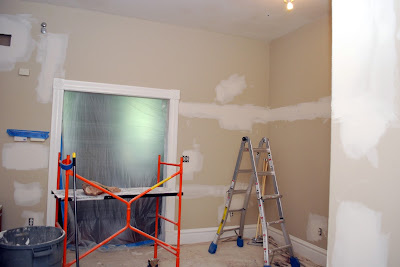 Which is where we are now. Third coat in and lots of sanding (and shop vacuuming). Sayonara beigey-blah’s. Your days are numbered. 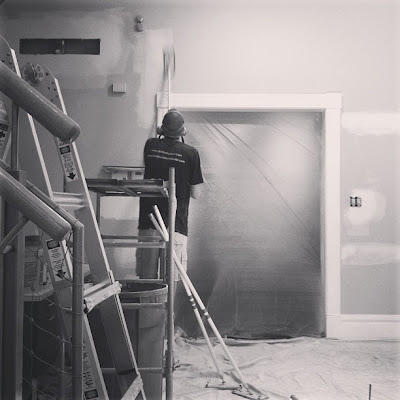