Tuesday was a rough day, the details are unimportant so I’ll leave it at that. At some point in the night I forgot how to breathe, how to simply take a breath, followed by a second breath and then another. Forgetting how to breathe makes it difficult to talk, but somehow I managed to choke out the words that it feels impossible to carry on like this – with normal life – like nothing has happened. He said that there is nothing normal about this, not at all. And then I could breathe a little more.
Things are not normal, and yet I continue forging on like they are – doing the same things each day and trying to convince myself that the repetition of it all will make it better. It doesn’t, it just squeezes my chest tighter and tighter, until I have no choice but to let it just be what it is. Long and painful and hard.
Yesterday morning I woke up and thought I might do a few not-normal things – nothing spectacular, just a little different than the days before. The girls and I went out for breakfast. F and I changed up our dropping off at school ritual a little bit. I strung more than four words together at work – not for long, but a little at least. I emailed some friends to make plans for the weekend. I put away the books on loss and grief for awhile and picked up “The Great Gatsby” off the shelf and read in the tub, and then the bed, until I was drowsy and ready to sleep. I planned to write a blog post, but I decided not to do it before sleeping, but wait until this morning. It all worked, a little bit, to help release some of the pressure on my chest. I’m looking forward to the weekend, and stretching my legs and my lungs out a bit in this glorious weather we’re having. I’m repeating the mantra “there’s nothing normal about this” to myself, and trying to give myself permission to dial a few things in when I need to.
…..
Perhaps I can segue from that line of thought to this one, because I’m determined to talk about something else for a bit. The common thread here will be “not normal”. E has monthly projects at school, and her latest one was to build a model of a watershed. When the project was introduced to the class, her teachers explained that the students could make their models out of recycled materials, cardboard or styrofoam, clay or legos – whatever materials they had on hand or wished to build in. E raised her hand and asked if she could make hers out of cake.
When she arrived home that afternoon she told me her plan, and I verified with her teachers that it was okay. I thought it was hilarious that she wanted to take that route, but I wasn’t really surprised. I was pretty much convinced that she could do whatever she put her mind to after my birthday cake earlier this year.
As she made plans and calculated ingredients and sketched out her final model I realized that we were going to be making a LOT of cake. She suggested using a Cake Boss trick that they use for oddly shaped pieces on top of their cakes – they mold them out of rice krispie treats, and then dirty ice them with buttercream and cover the finished product with fondant. That seemed like a better idea all around – easy to stack and carve and shape exactly like she wanted. Ten batches of treats later we had a kitchen table that looked like this: 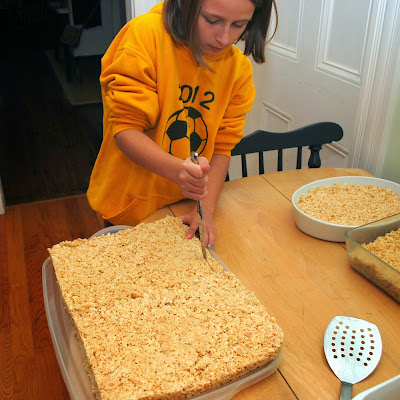 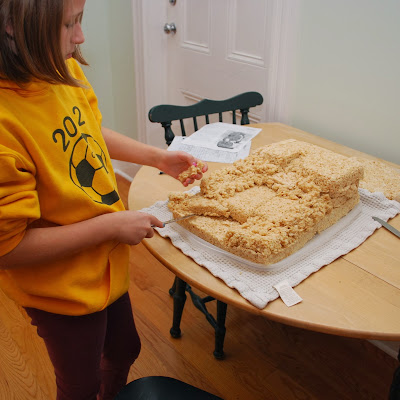 She built up the various layers to create the elevations she wanted, and then she began carving out the river channel and using smaller pieces to create slopes. I provided some assistance by whipping up some buttercream icing in the background while she carved, and then she dirty iced the model and got to work on the fondant. 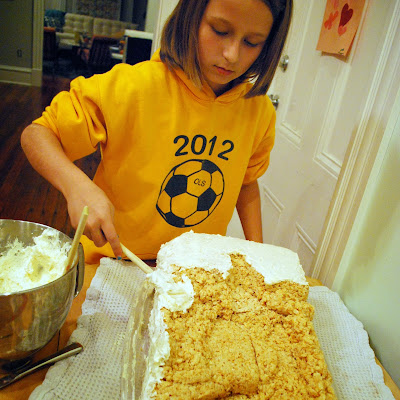 Then the fondant rolling began. She made four different shades of blue and rolled them together to give a marbled appearance on the river. 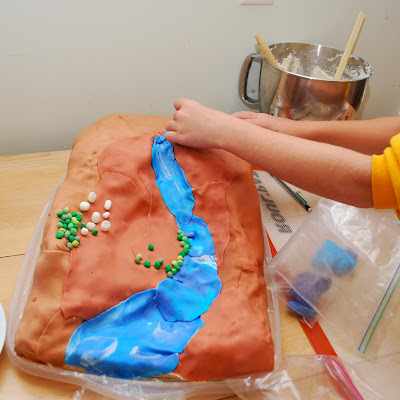 Little green fondant trees were rolled, and white houses and buildings formed. She employed me for about an hour to roll out trees, and then did the same with her father for an hour after dinner. I came downstairs a little later and the model was really taking shape – farmland and tree lines and riparian corridors and wetlands.
She made fluffy white clouds with blue raindrops and wanted to stick them on with toothpicks but I grabbed some thin floral wire I had. She made labels for the model, and I helped her glue them onto wires while she painted details on with chocolate – watershed boundaries and rocks and crops in the fields. One side of the model had a small cutaway to demonstrate the groundwater – M said she should have created an entire groundwater system within the cake, so that when it was cut you could see it in each piece. I could see her tucking away that information for later. 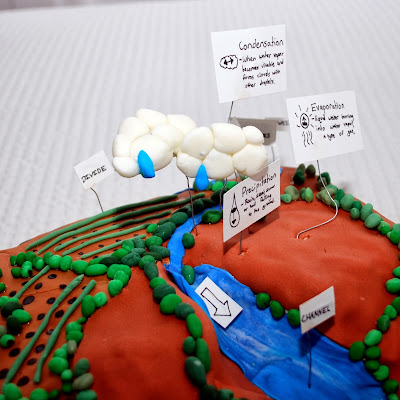 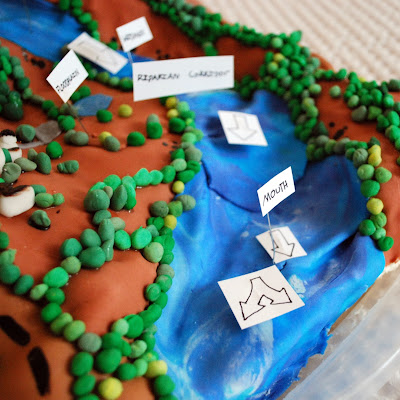 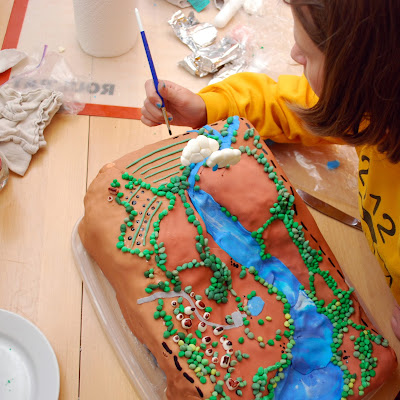 That was one proud kid carrying in the model to school on Monday. When you bring an edible model you get to present first, and then everyone gets dessert. She brought home her comment sheet from her peers last night, and read them to me. Her favorite quote on the sheet was “If at first you succeed, try, try again!” – a plea for her to continue her cake themed projects in the future.
I’m afraid she’s hooked, and cake sculpting might be the new normal in our house. 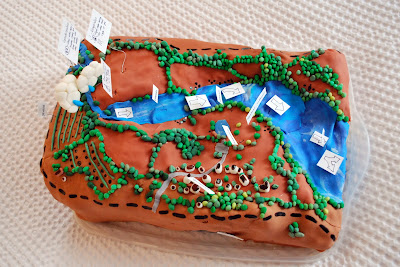 6 thoughts on “not normal”