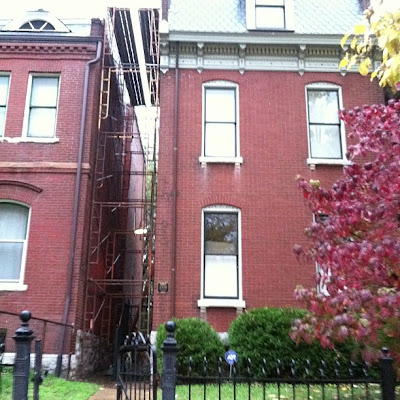 I apologize for the poor photo quality above – I took that top shot with my phone, through the open car window. You can’t tell it from the photo but the rain was really starting to come down, and F and I were in the car plotting our way through the rain and the scaffolding. Man, that girl is pretty jazzed about the activity on the house. The two men working on the house are named Kevin and Bob. She kept asking me over and over again what their names were, and I kept replying “Kevin and Bob”. Then she would follow up with “I’ll call them Bobin.” Over and over again. It was pretty funny, and only slightly annoying.
Day three of the work included the erection of the scaffolding on the side of the house. After running through the puddles and up the stairs to the front (side) door, ducking slightly to avoid smacking the metal uprights, we opened the door and moved into the living room. And that was the moment when F glued herself to the threshold. I could not coax her into the house. She was absolutely fascinated by that structure. So we stood on the stone ledge and looked upwards at the platforms way above us. I took the photo below at the view she was so enamoured with. 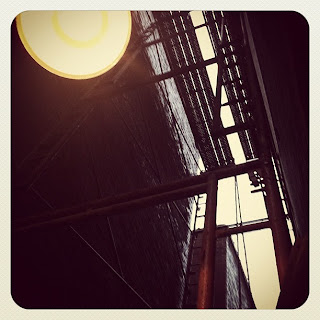 The phone rang and it was M, heading home from a rained out soccer practice.  I told him the little one didn’t want to come in the house, and he mentioned the view of the scaffolding from the third floor.  That was the ticket.  F came inside, threw off her shoes and ran up two flights of stairs to E’s room.  We pulled up the blinds and looked at the scaffolding from that view.  It was starting to get dark then, but she wanted to play right there for awhile. 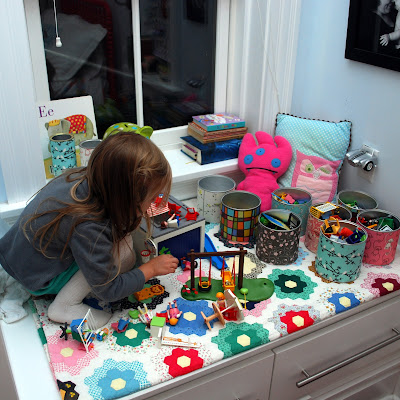 All the Playmobil people became masons, and they were scrambled up to the top of the garage to work.  “Scaffolding” is the new favorite word around here and “Bobin” is all the rage.  I forget sometimes that she hasn’t been around for the ride on much of the renovation work at the house, but from the little bit we’ve done since she’s been born – and her obvious excitement and curiosity about it – she’s certainly cut from the same cloth as the rest of us. 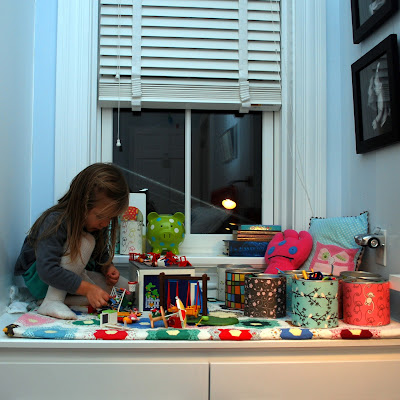