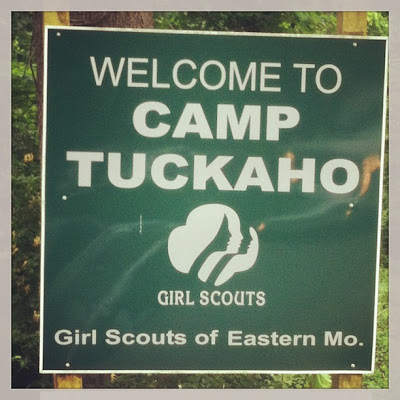 We dropped E off at Girl Scout camp, by herself, yesterday afternoon.  I think I’m okay with this (although I suppose it’s a little late to change my mind).  As soon as the camp catalog arrived in the mail sometime in January, she devoured every word on every page and circled the themed weeks she was interested in.  We sent her application in at the very beginning of the process and she crossed her fingers that she would get her first choice.  She did, and she hasn’t looked back since.
It’s quite amazing to watch her freely join in with others, this long-ago-shy girl of mine.  She spent the first five years of her life clinging to one leg of mine or the other, watching groups of kids play and interact freely while she watched with one eye from just behind me.  Always watching.
Then slowly, so slowly, those fingers that were wrapped tightly around my thighs started to loosen, and she began to join in more.  Quietly at first, always quiet, and far too nervous to hear her own voice in front of a crowd.  If a new person asked her a question, she’d draw close to us and look at the floor, and maybe whisper her name or her age, and then wait for us to translate it into an audible response.  I would whisper to her “be brave” as we stood by a playground crawling with other kids.  She wanted to play, but more than that, she wanted me near, always near.
In kindergarten, for her birthday, she donated a book to the school library – just like all the other kids in her school do.  During assembly she was to present her book to her friends and talk about why she liked the book so much.  She was absolutely certain in her decision – it was Robert McCloskey’s Make Way for Ducklings, and she wanted to share all the photos of the “real” ducks she had seen that spring in Boston, and tell everyone just why she loved that book.  She knew that she probably wouldn’t be able to do it – to get up in front of those new faces and tell them all of those things – so we made her a paper to hold up to read, and if she couldn’t do that, then her teacher could help her.  She wanted everyone to know those words that she was longing to say – even if she couldn’t say them.  And she couldn’t – not yet – but I’ve never been so proud of her as I was that afternoon when she stood up there, speechless, in front of that giant-tiny crowd.
Kindergarten was an amazing time for her, and she started to find her voice among those other eleven friends.  Then she discovered a soccer ball and a paint brush and a trapeze and a zillion books, and then a script.  A year later she was practicing lines for an after school drama club, and now she’s the first to sign up for anything that’s offered on a stage.  Those that know her now can hardly believe she was ever too shy to join in.  Even those of us that knew her then sometimes forget.  She repeatedly walks into new places where she doesn’t know a single face – her sports team, her girl scout troop, a club or a camp, and now she doesn’t even look back.  She goes to the teeny-tiniest of schools, but her circles of friends stretch across the city, and they will grow and change as she does.
Now she’s off at camp – not with her troop, but on her own.  Just like every single Monday morning of this summer, she’ll walk into a sea of new faces and find her place in the group.  I see a lot of me in her – I was pretty shy as a little kid, and I still get a little nervous walking into the unknown.  But I went away to college and to graduate school not knowing a single soul and I think I kind of liked it that way.  I know I did.  I’ve never regretted pushing those circles a bit, challenging myself to walk into a new classroom, a new church, a new workplace, a new neighborhood.  She’ll do the same, I know.  And we’ll miss her – oh, how I miss her – but I’ll never let the missing part stop her, stop this.  Wherever this world may take her, for as many days as it will give her. 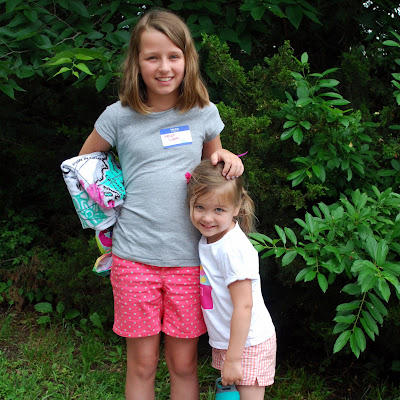 dropping her off at the goodbye tree 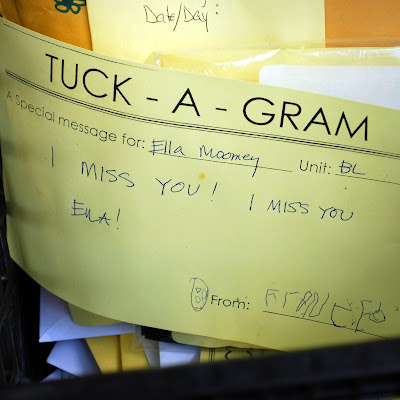 we wrote her one for each day, F took Wednesday
those were her words, and her own sad face 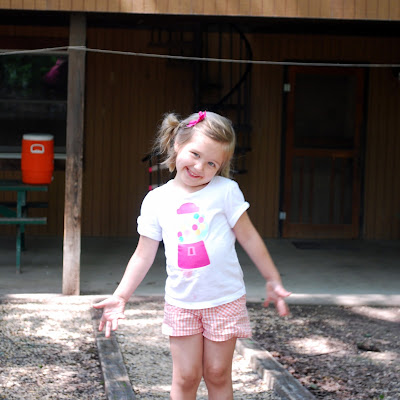 after we said goodbye to E, we drove her gear to her cabin – so we saw it before she did
the little one was ready to move in

4 thoughts on “another monday”