With our bellies full of ice cream, we headed due north to Sandusky. We had one big reason for choosing this place as our final destination, but that’s a post for another day. As we neared the edge of Lake Erie the heavens broke loose with a tremendous thunderstorm and lots and lots of rain. We headed out to the end of the peninsula to find our cottage, driving on a narrow two lane road between a marina full of rocking boats on one side and a scaffolding of steel over two hundred feet high on the other. The lake was churning, the raindrops were so loud on the roof of the car, the sky looked so ominous and we were all completely and totally excited. 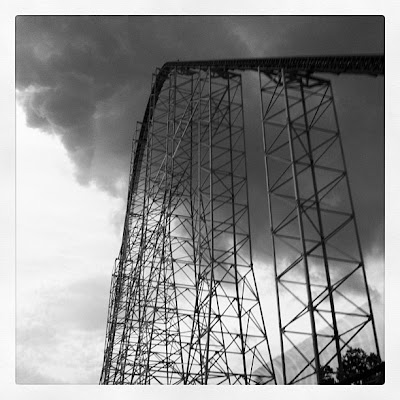 The next morning was much calmer, but it took the sun an hour or two to make an appearance. We saw our front porch in the daylight and marveled at the view. 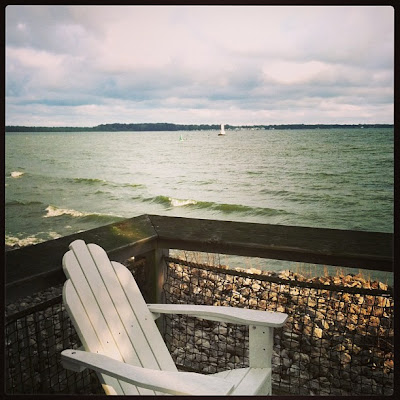 We drove back off the peninsula and into town to catch a ferry, and a few minutes later we were buzzing across the lake looking at the cottage we just left behind us. 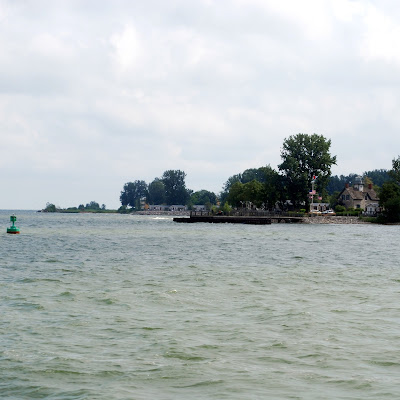 It was a chilly morning, after the storms, and everyone on the ferry stayed inside. Within a few minutes we were at another dock – this time on Kelleys Island. 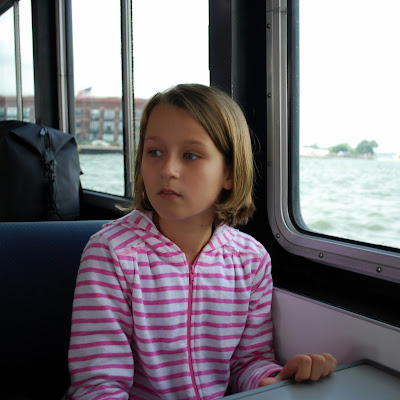 We walked into town, had some coffee, browsed in a few stores, and then tried to keep F from taking anyone out with an errant miniature golf club. Then we did what everyone else on the island does, we got in a golf cart and putzed around the place.
Someone got to ride in the front seat – barefoot, no less – with a hand on her lap to contain any sudden bursts of the wiggles. 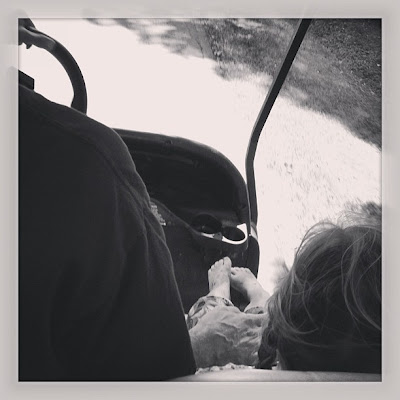 We headed up to see the glacial grooves, which were impressive, but not nearly as impressive as the complete meltdown that front seat golf cart passenger had while there. She was ready for the beach, and she wasn’t the only one. 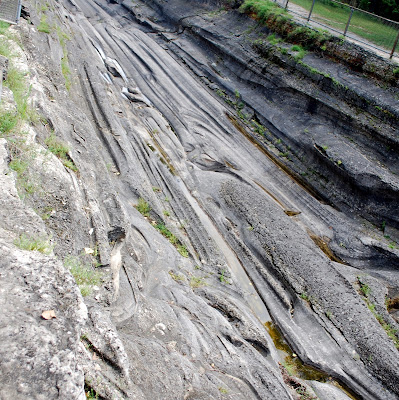 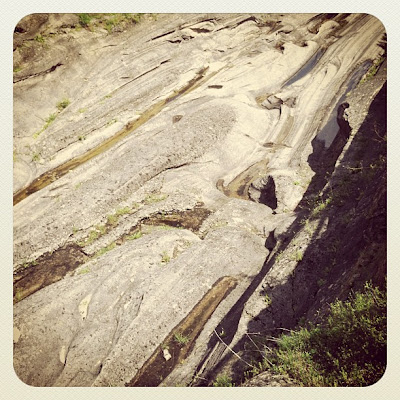 So we went there next. 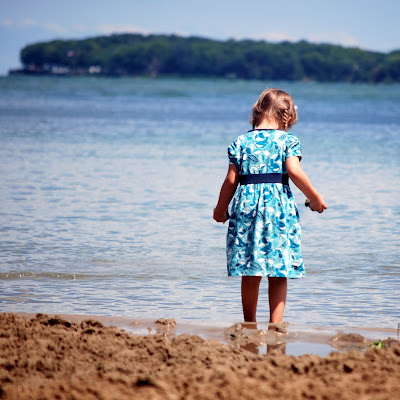 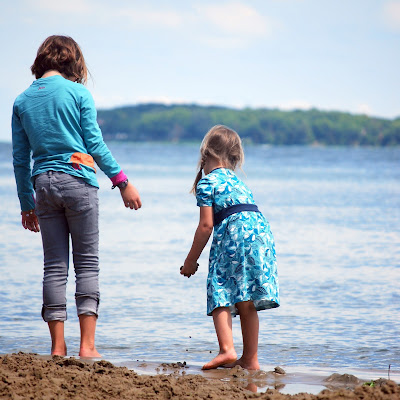 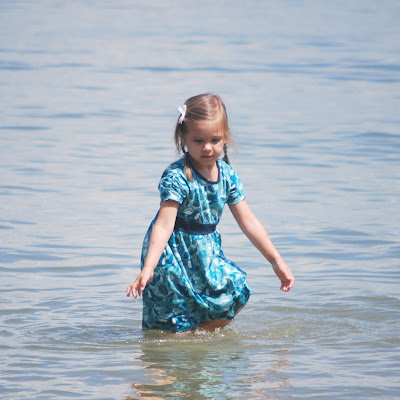 The girls played for awhile, but then the sun was out full strength and it was time for some shade and a late, late lunch. We toured around a big circle on the island, and then found a house to buy (still in the middle of renovations, just the way we like them). 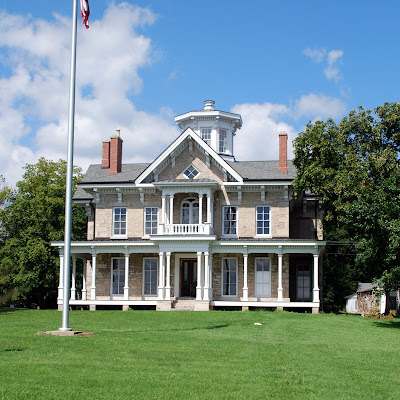 But alas, it was not for sale. 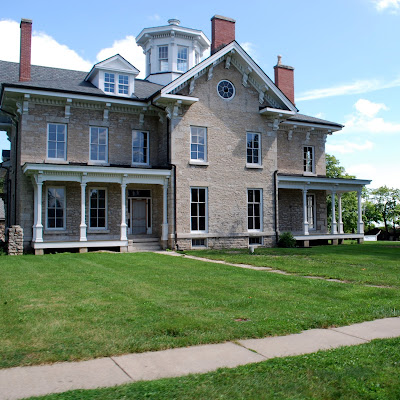 Which is probably good, since I’m fairly certain we couldn’t afford this kind of front yard view. 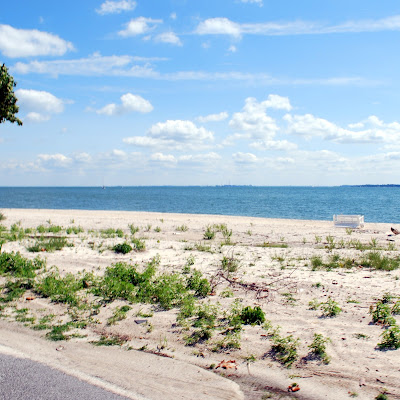 We stopped in The Village Pump where we proceeded to order what seemed like a reasonable lunch, but when it arrived it filled the sixty inch diameter table. We were too embarrased to leave so much food uneaten, so we boxed up leftovers in a grocery bag that looked like we were staying for the week. F laid waste to her platter, and then pushed it aside, laid her burpie on the table and without a single word to any of us, turned her head and fell asleep. After about a minute I took this picture, and a few seconds later her thumb fell out – a sign that she was out like a light for the rest of the meal. The next room over was filled with the sounds of happy hour and people singing (badly) to music in the bar, but we won the prize for the first down and out. 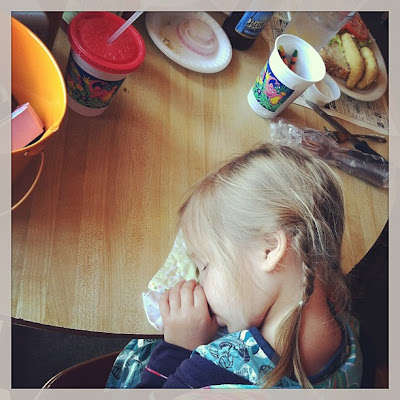 After a late afternoon ferry trip back, we made the same drive as the night before, but this time with sunny skies overhead. 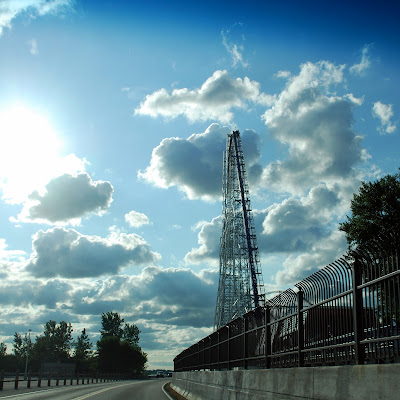 We walked down from our cottage to the lighthouse, and then out onto the pier – exclaiming over the gorgeous August weather – seventy and breezy. 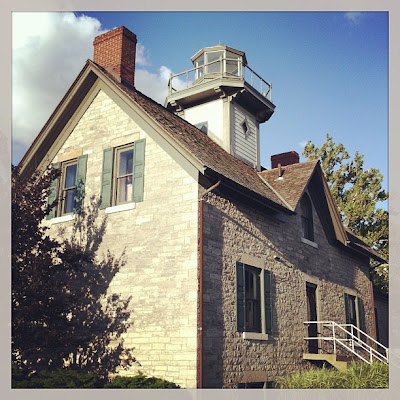 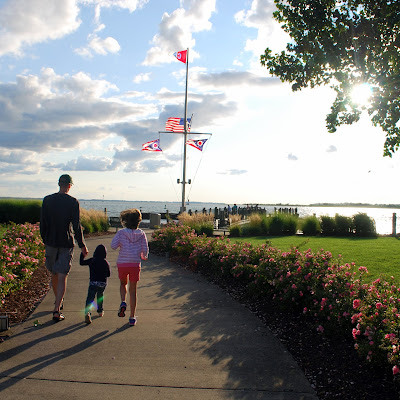 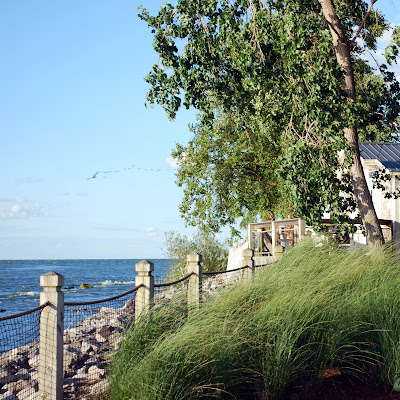 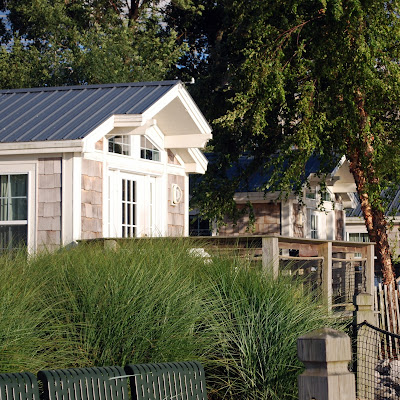 It had been such a relaxing day – but we were ready for the next one, for sure. This might have been the quiet, peaceful view off the front porch, but there was some pretty fun stuff waiting for us just out the back. 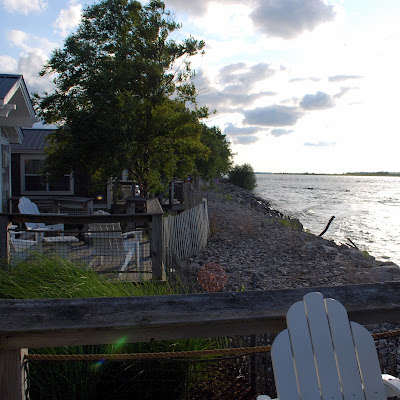