I’ve talked about this before – about the shifting required in any home renovation project. We spend a lot of time doing it, and it’s probably one of our least favorite aspects of always having a house with some sort of ongoing project. Which means we try to minimize the times we do move things. We did some pretty major work on the living room, which got us fired up to continue on into the dining room – and that meant shifting the dining room furniture out, and a lot of it came into the living room. It’s been almost six months since the living room was completed, but there were still piles of objects that I wanted to hang on the walls. The problem was, those walls were all covered with furniture that won’t ultimately be in there.
M had to head out of town a couple of weeks ago for work, and I asked him if he could move the furniture out – at least temporarily shift it – so that I had a clean slate to work with. The piles were getting to me, and I just needed to buckle down and get it done. So he moved them before he left, and then I worked each night until the wee hours of the morning getting things onto the wall. I’m always amazed by how long that process really takes.
I started in the corner by the entry door, and finally hung the clock I assembled sometime last year. I didn’t have a giant cool looking nail to hang the top of the leather strap, but I dug around the basement workshop for awhile until I found something that would work. I installed a drywall anchor and then used every bit of brute strength I had to install the giant black screw with a hex head.  I was also trying to install things around the (still imaginary coat rack) in the corner. 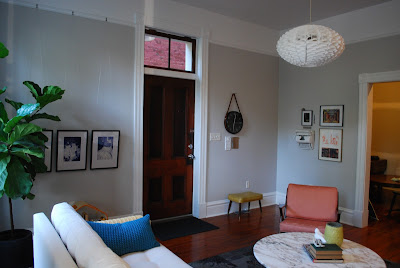 Here – let me show you what it will look like eventually. Ignore the quick photoshopping of the ghost like coat rack there. 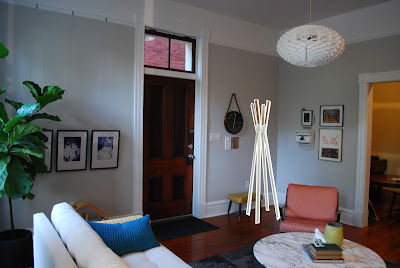 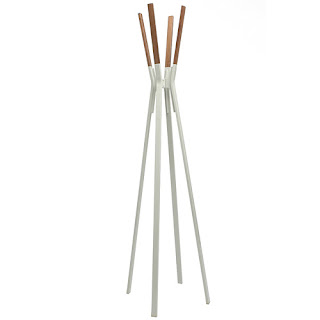 The white clay piece under the clock is a little rendering of our house that I did, and the brown kraft paper to the right of that represents the photo calendar I mentioned here that I ordered. I’ll take a close up of this area when it arrives later this week. 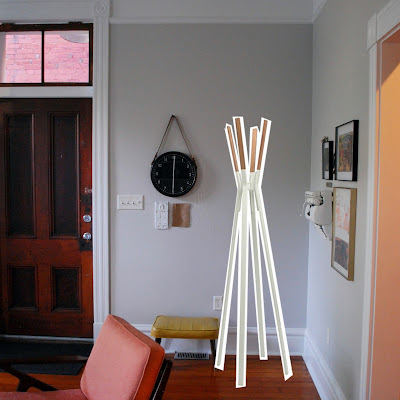 I’d still like a little ledge at the door – I’m particularly fond of this one from onefortythree, but I think the proportions are a little too large. Maybe down the road M and I can design and build something similar. I don’t want this area to look like a mud room – it is the living room first and foremost, but it would be nice to have a place to put the dry cleaning slip, or the outgoing mail on the night before it needs to head out the door. We’ll always have a wardrobe downstairs (because we have no closets on the first floor), but we’re moving that piece into the dining room and out of the living room because it’s just too congested and visually cluttered with it in there. I don’t plan to actually use that coat rack – which sounds completely stupid, I know. I’d like it there for guests to use though, and anyone with a particularly gorgeous looking scarf (!)… Really, I like it for the proportions and the contrast between the metal and the walnut just as much as for the actual function. I’m fairly certain we will entertain more once we have it, don’t you think?
I’m most proud of “the hanging of the typewriter” – vertically on the wall, with four heavy duty brackets installed into four heavy duty drywall anchors. Because deciding to hang it on an actual stud would have been far too easy. It’s still there, ten days later, so hooray for hardware. It took an hour+ to hang by myself, but it’s up and it’s happy. 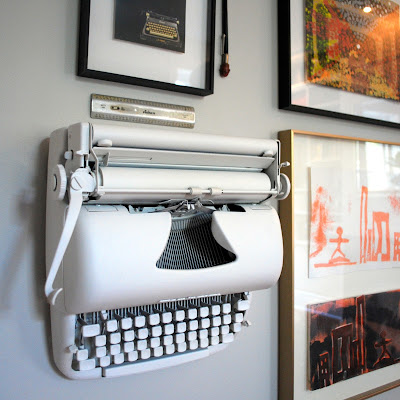 I found a copy of a favorite quote of mine – with a painting of a typewriter below it, no less – so double score for the lovely tribute to writing that I was looking for. Someone suggested framing this letter than E typed long ago, but alas, I cannot find it anywhere. I loved that idea though.
We write to taste life twice, in the moment and in retrospect.
-Anais Nin
The drafting tools – a scale and a mechanical pencil – belonged to my late grandfather and were given to me after he died. 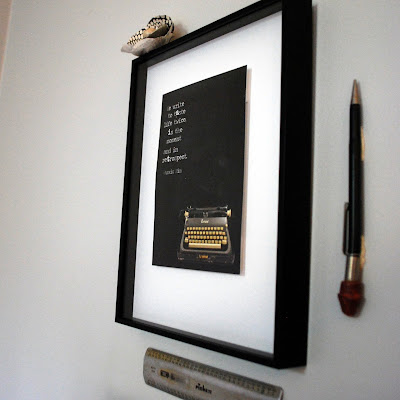 I also bought some more of my favorite Framatic frames and framed a couple of E’s recent works. My parents always hung my work around the house – taking the time (and spending the money) to have many of them professionally framed. I can still recall where every painting hung in the first house I can remember from my childhood. It makes a difference, to hang their work – I believe it, and try to do it as much as possible – even when I do it in smaller forms. These were two pieces E did in a mixed media class this summer. 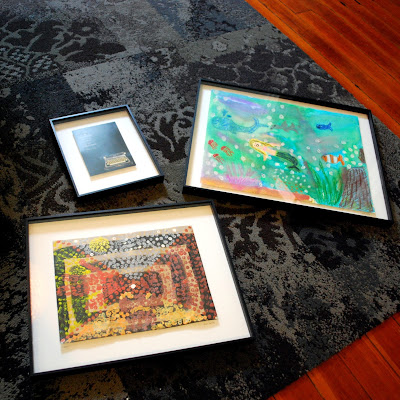 I hung one in the living room, and moved another piece from a printmaking class several years back in school to the living room as well. The underwater sea painting now hangs where the city print used to, on the third floor. 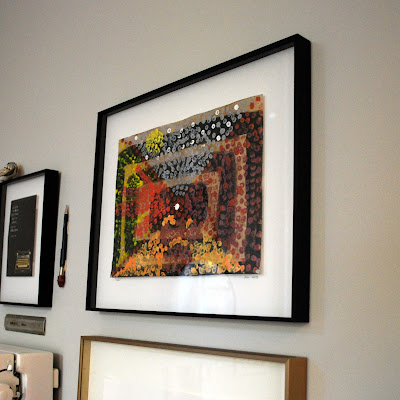 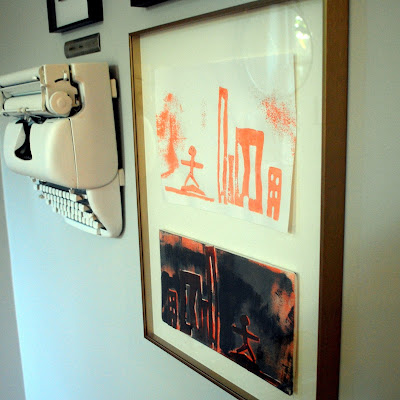 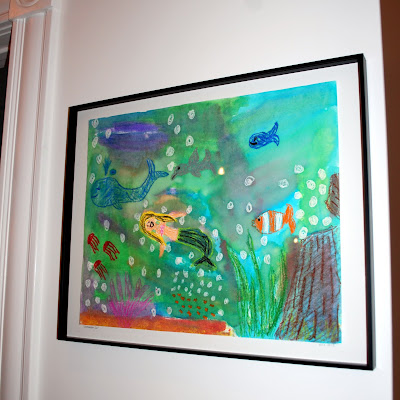 I like to use the deeper Framatic frames where you mount the artwork on top of the mat, rather than behind a mat with the center cut out. I like the dimension of the floating piece, and I also think it emphasizes the work itself. Kids’ art comes home in hands or backpacks, sometimes a little rough around the edges or a little wrinkled. Highlighting this in a floating frame seems like the right way to go. I also remember to pencil in their specific title for the piece in the left hand corner, and their name and date on the right. Always sign your work. (My mom will laugh at this, because I never liked to when I was young.) 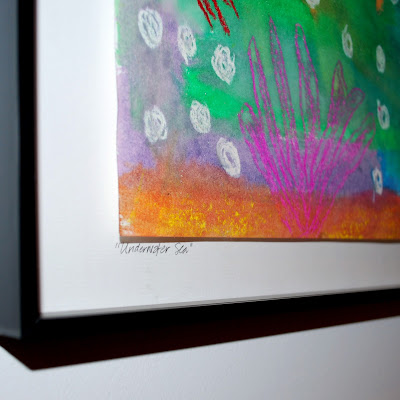 In the front corner by the door, I hung the three black and white photos from our wedding. These hang with wires from the picture molding near the ceiling. 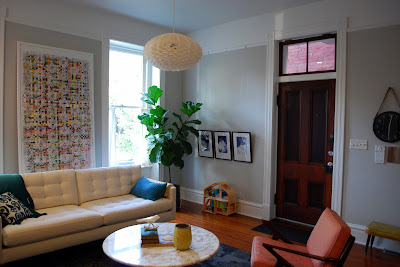 Here’s an Instagram closeup I took when F announced she wanted to set up her house under the wedding. She asks me about once a week whose back that is in the picture. I think she’s completely baffled that we would hang a picture of ourselves without our faces. She occasionally pouts that she didn’t get any of that cake either. 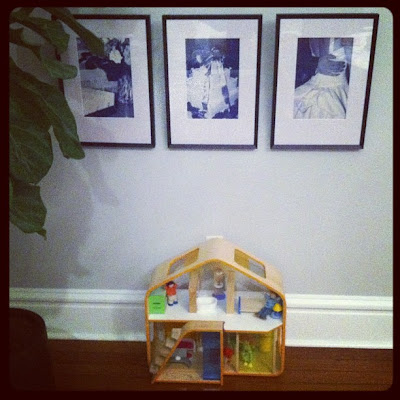 Swinging back to the right, I hung four of the family portraits we took last fall. I needed something small and clustered here, with enough space around it so that it didn’t look too cluttered with the bookshelves right there. I love these photos, and can’t wait to get more of them on the wall. 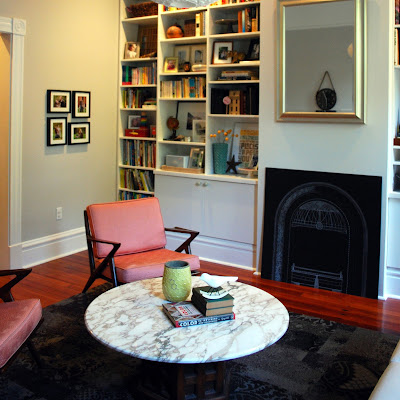 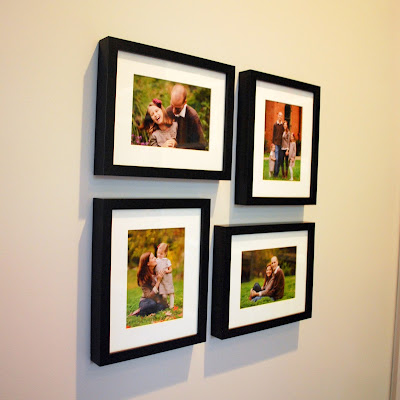 I also thought I’d give you another shot of that marble table find I spoke about last week. The chairs are still pink, but that’s okay. I love them enough to look past the blush. 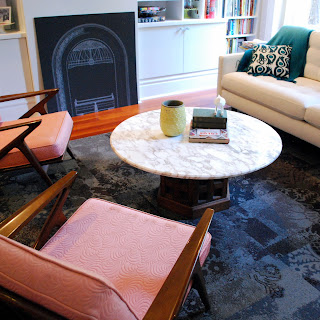 And one more shot for the ages – with my quick growing fiddle leaf fig showing up in the mirror. I’m going to attempt some pruning in the spring (that’s when I’m reading it’s best to do it), but it makes me a little nervous. It seems to be thriving here, so I think it can handle it. The room looks so good in this photo – it makes me smile. Which is good, because about three days after I took this, all the extra furniture got moved right back into this room – now it’s just standing twelve inches away from the newly adorned walls. Shifting is always the price of progress. Thank goodness for an amazing husband who worked the entire three day weekend, and who is strong enough to shift things around when I ask (nicely, of course.) Onward, upward, my friends! 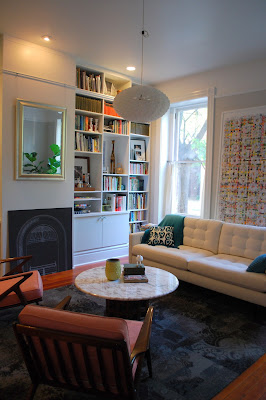 6 thoughts on “two steps forward, one step back”