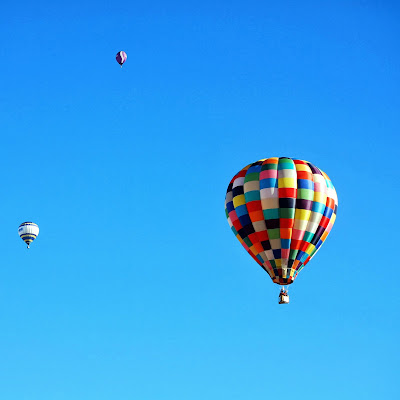 This was not the plan for our weekend, but sometimes big plans fall through. So we put on our game faces and made the most out of the weather and enjoyed some things around town.
There were a few tears Friday night, but I remembered to check the Magic House website to see if it was the free family night – and it was! Those Fridays can get a little nuts there, but we’ve found that going out for a leisurely dinner and then arriving around 7:30 works pretty well. People are starting to head out of the place, and the crowds thin. It does wipe the little one out to stay and play until nine, but she handles it pretty well, and I’ve always found that small doses of big things are far more enjoyable than big doses. Free admission makes small doses work – you don’t feel like you have to play all day to make the entrance fee worth it.
First we went to Russell’s to eat on the back patio. They were trying out table service for the evening – which was a little fancier than we were looking for, but since we weren’t in a rush we gave it a go anyway. The wait times were a little long, but the staff there is so nice, and the manager brought the girls treats (before dinner!) and then we ended up not even having to pay for dinner at the end. I’ll participate in any sort of dinner trial for that deal. We left a nice tip on the table and headed over to the Magic House around 7:45. 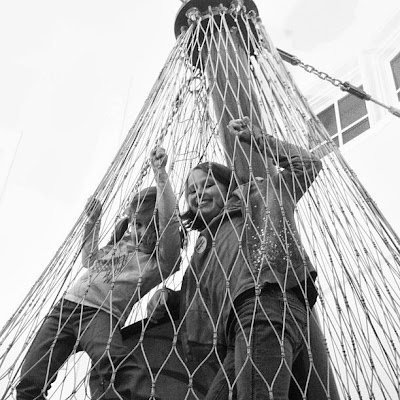 The girls like the beanstalk (when it’s not crowded) and they love working at the stations to solve the art theft crime. It was the last weekend of the Fairy Tale exhibit, and so they roamed through there for awhile. The both climbed into the Cinderella coach and the lights dimmed and the music started and a screen lit up and I caught the best expressions on their face – pretty dim and blurry with my phone camera, but hysterical in person. Maybe the train exhibit is new – I don’t remember it from before, but it is tucked out of the way, and F loved it. She stood in some sort of RR gate pose for at least twenty minutes watching the trains pass by. 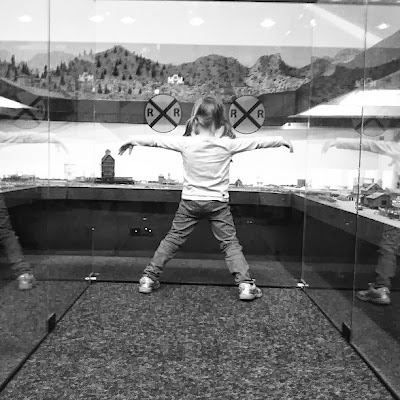 After that late night out, we got up EARLY Saturday for an eight o’clock soccer game – and it was CHILLY. (That sentence required two sets of CAPS.) I’m not complaining. Two weeks ago I sat through the “Hottest Soccer Game of All Time”, so I’ll take a crisp fall day one, but eight o’clock on a Saturday morning is too much. Did I mention that M and I stayed up until 2:45 am the night before working on the house? That’s a (crazy) story for another post.
After the soccer game the girls and I needed to stay out of the house all day because our staircase was disassembled and there was general (organized) chaos in the center of the house, so we ran a couple of errands, drove over to Kirkwood and grabbed coffee and walked through the farmer’s market. We stopped into a dance supply store looking for (and finding) the perfect long sleeve red leotard for a certain Ladybug Girl I know, and then we picked up sweets from the Sugar Shack and a picnic lunch from Great Harvest Bread Co, and headed to Forest Park for the remainder of the day.
By this time it had warmed up nicely – cool in the shade, toasty in the sun – so we threw down blankets between shade and sun and pulled out books and a few animal toys and proceeded to relax for a few hours. 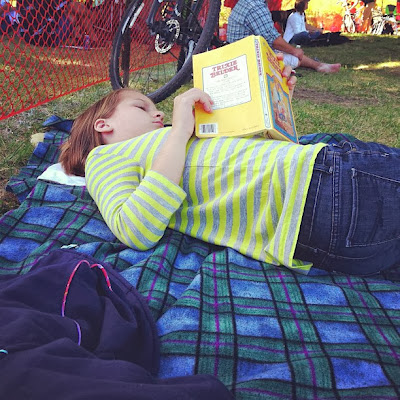 Around two-ish sky divers started filling the sky above our head and landing in the open field behind us. 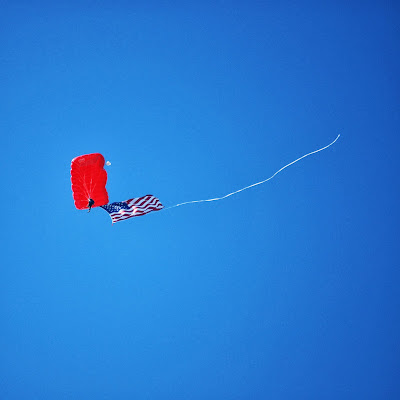 And when it was almost four-thirty we packed up our stuff and headed to the edge of the field to watch the balloons inflate. 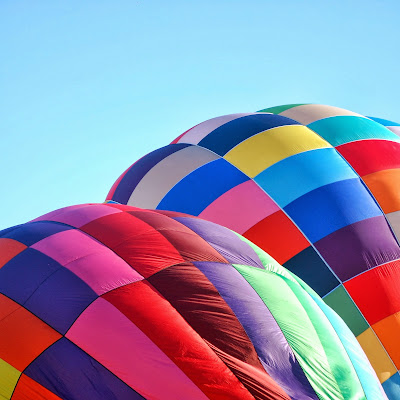 For at least ten years now we’ve always gone to the Friday night Balloon Glow – but this year we thought we’d be on the road traveling, and so we hadn’t planned ahead. Plus, Friday was seriously soggy – and Balloon Glow attendance requires some thoughtful pre-planning to be enjoyable, even on the nicest of September evenings. I did miss the sight of all those balloons glowing in the dark, but I can’t say that I missed setting up a damp picnic and walking around in the mud. 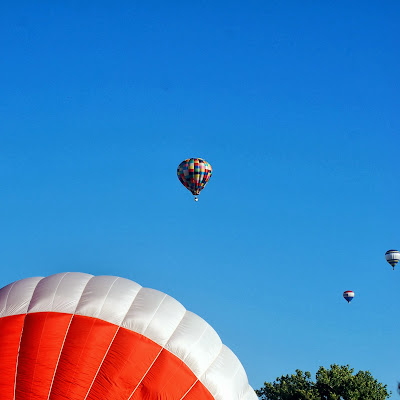 The actual race was on Saturday, and by that time there wasn’t a cloud in the sky and all traces of the soggy were long gone. 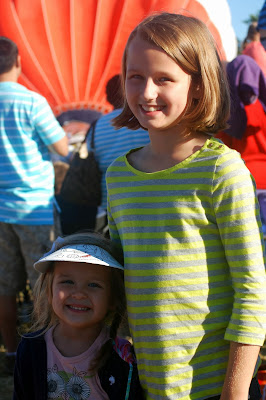 The entire field is ringed by spectators, and it’s so much fun to watch one of the balloons come together directly in front of you. The crew is working furiously to get everything unpacked and attached and ready to go – and then suddenly it’s inflating and enormous. 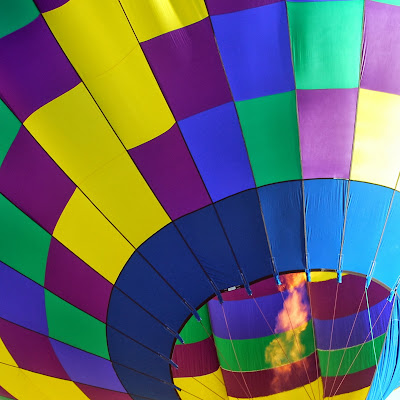 The little one was missing her dad’s tall shoulders for sure, but she had a very helpful big sister to lift her up to see the good stuff. 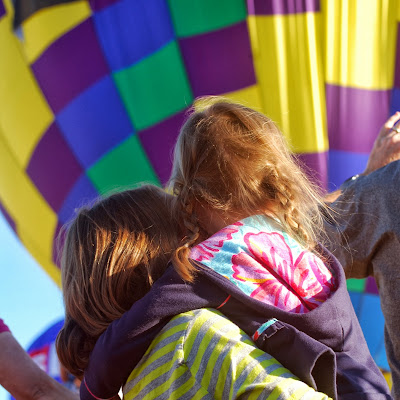 It was pretty thrilling to see the balloon in front of us launch. Lift off is fast, and before you know it they are specks in the sky. 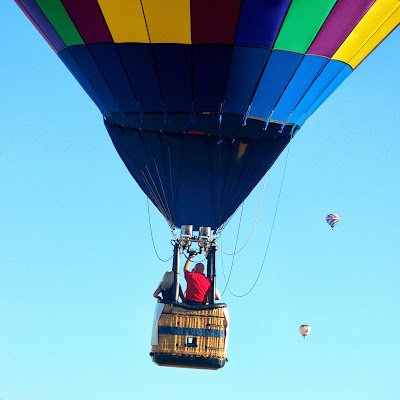 The skies fill with a dozen balloons, and there are still a dozen more on the ground inflating. 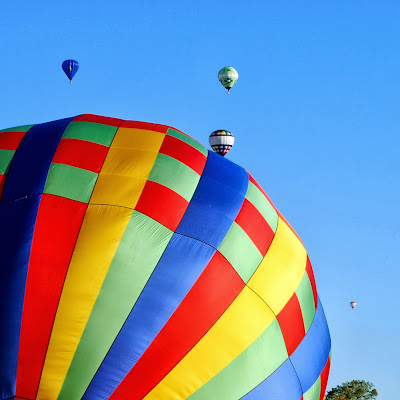 We watched the launching for almost two hours. Towards the end E spotted a giant gum ball machine inflating – that was exciting. She was wishing she had hot air balloon rides at her recent gum ball party. 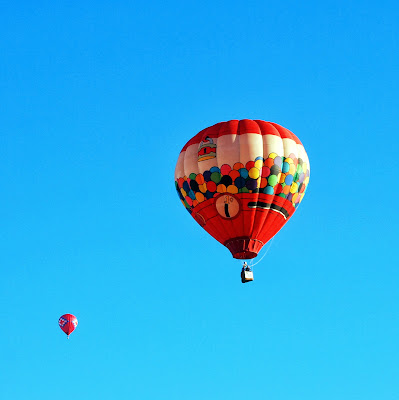 The troops were tired, but didn’t want to leave til the end. F alternated leaning against us to re-energize. 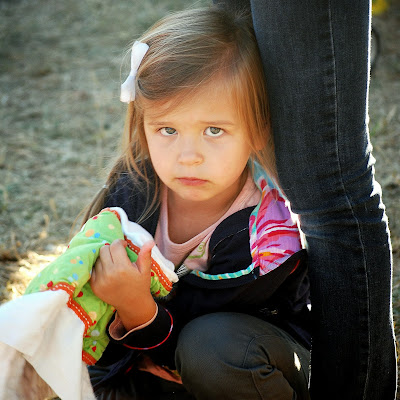 Then the crowds thinned out and we watched the last dozen balloons inflate and lift off, before heading home to a late, late dinner of popcorn and crashing into bed. 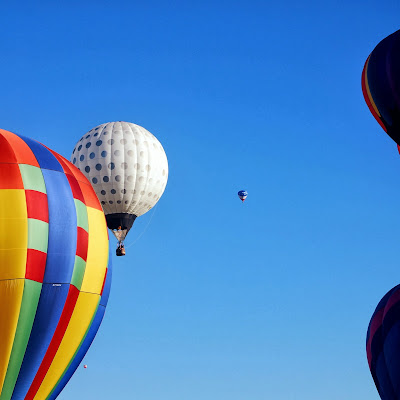 Not the weekend as we planned it, but a beautiful weekend nonetheless. Yes, there is traffic, and parking, and port-a-potties and crowds. There are food vendors and junky toy vendors and long lines and effort involved in packing up and hiking in for the day. But then the balloons are up, and everyone cheers with each liftoff and the sky is a glorious, glorious shade of blue and each balloon is prettier than the last. Over the years I’ve watched the balloons floating through the sky – from the windows of my graduate school apartment across from Turtle Park, or various places around town. This year they headed south with the wind, and I imagined what they would look like hovering above our neighborhood; what the view was like from those baskets up there. There is something so exciting about seeing them float across our city each year.
I love this place. 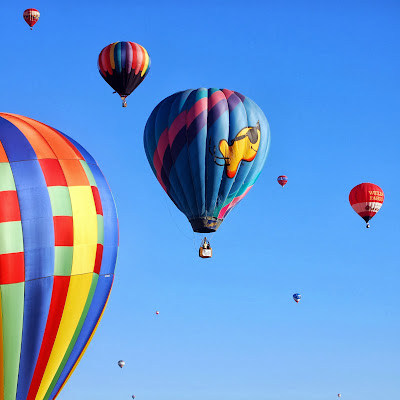 1 thought on “unplanned, but lovely”