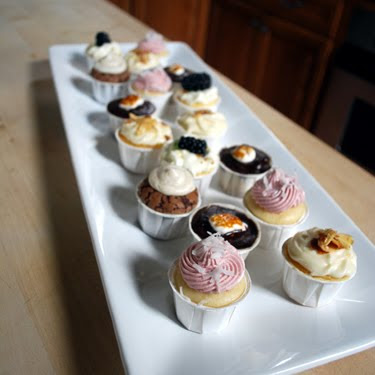 After E’s birthday party Friday night, I cleared out the kitchen, and then Saturday morning, cleared out the family, so that the baking could begin.  These little ones were for a fiftieth wedding anniversary party, and seemed to be a big hit.
…..
Peruvian Caramel Filled Lemon Cupcakes with Raspberry Buttercream and Coconut
Ricotta Almond Cupcakes with Apricot Buttercream Frosting and Burnt Butter Almonds
K Family Campfire S’mores
Blackberry Lime Mojito Cupcakes
Chocolate Chai Spice

The majority of the recipes were from, or derived from Cupcake Bakeshop 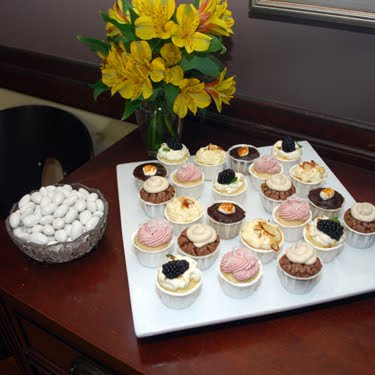 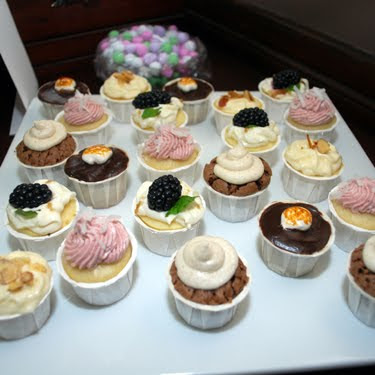 Baking in bulk (and I mean, serious 350 cupcake bulk) can be a bit daunting, and takes a lot of pre-planning, especially with a normal size, most-certainly-not-commercial kitchen.  Once the flavors were chosen I set about finding recipes to match – in some cases we knew exactly which recipe to use, in others I was looking for ideas across several themes.  Recipes to be doubled were noted throughout the recipe – an easy way to make a big mistake if you stop doing the math midway.  I made a master grocery list mid week, filled the cart with an extraordinary amount of unsalted butter and sugar, and set the alarm for an early Saturday morning. 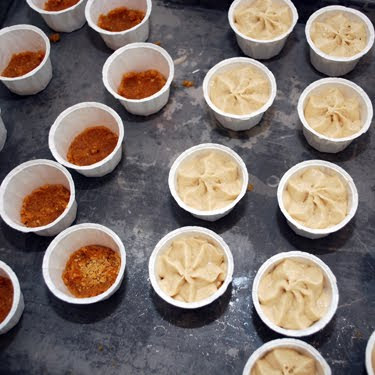 The most challenging recipe of the lot were the s’mores cupcakes, but those were important because of the entire family’s history of camping and being together in the great outdoors.  The cupcakes started with a graham cracker and butter crust and then the graham cracker batter was piped into all the little cups.  When these things came out of the oven they were unbelievable, even with no toppings.  After they cooled, marshmallow fluff was injected into the center of each cupcake, twinkie-style. 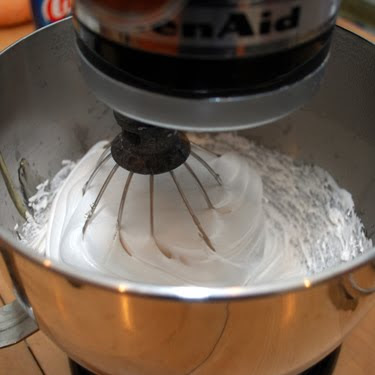 It took two tries to get the homemade marshmallows right, and even that second round required M to rescue me from the sticky mess.  (He offered to help only if he was allowed to photograph me up to my elbows in sticky white strings.)  They sat overnight to firm up, but even after following the directions to the letter, they were nearly impossible to remove from the foil, and took a very long time to cut apart.  I think my homemade marshmallow days might be over. 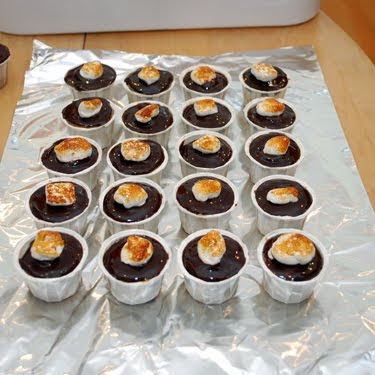 Torching the little guys to make them look toasted was a lot of fun though.  The intense heat also gave the chocolate ganache a really shiny appearance, and I thought they turned out really well.  The recipes are pretty involved, but all would go into my repeat category.  If you are interested in any of them, feel free to drop me a line in the comments and I’ll pass them along.
Last night was an early one, after a few rounds of the dishwasher and a good wipe down of all the slightly sticky surfaces in the place.  I have a few leftovers to share at work today, but I think I’m done with sweets for awhile…at least for the week!

5 thoughts on “a weekend of parties”