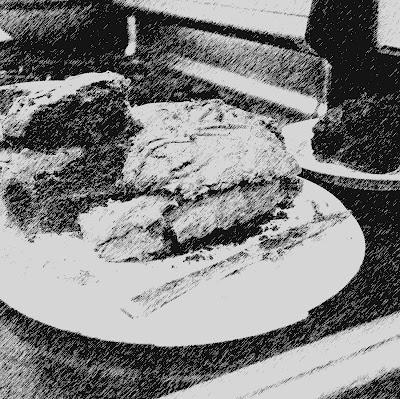 No matter how it is rendered, the truth of the matter is, this cake was a colossal fail.  It likely failed on multiple levels – quite literally and figuratively.  I overcooked the layers by a few moments because I was multi-tasking on the bookshelf drawings.  I started too late in the evening and perhaps rushed the cooling process a bit.  I know better.  There are no shortcuts in baking.  And when I assembled those three layers of heavenly scented cake I slathered on the icing.  I couldn’t help it – it seemed so fluffy, and light, and tasted delicious, and it spread like a dream so I used it all.  It looked magnificent.  I went to bed to the sound of ice pellets hitting the window. 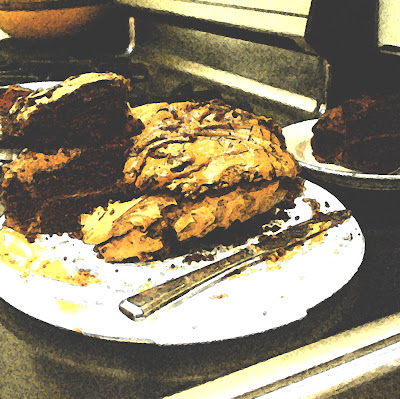 There were warning signs, I know.  The layers were slightly domed in the center and I didn’t take the time to level them with a knife.  I turned the top layer upside down to give the cake a perfectly flat top, but the gaps were larger around the edge.  The frosting gave just slightly once applied – a sure sign that the cakes, while cool to the touch, still held some warmth buried deep within.  I got creative with the offset spatula, and worked and reworked the edges to achieve that perfectly imperfect look.  I trusted the icing to hold, to mask whatever flaws might lurk beneath. 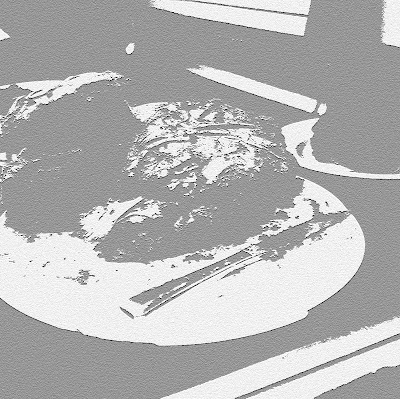 I crawled under the covers to block out the sound of the ice, preferring instead to dream of warm days ahead.  I knew the morning would come one hour too soon, and we’d drag ourselves out of bed to a slush filled sidewalk of sameness, nothing out of the ordinary for this week described as “spring break” which thus far is anything but.  I would have chocolate cake though, and we would eat it at work, and celebrate a birthday and take a break from the afternoon and the weather and the routine.  It is my aunt’s chocolate cake, which means it should be heavenly and decadent, and it would remind me of each Thanksgiving when I would see her and thank her again for bringing this cake.  As I made it I thought of her, and how tough her week was and how tough her fight is, and how we need her still in our Thanksgivings and in our lives.  It was the perfect end note to a trying week.
…..
And then, in the night, it failed.  The top layer shifted and broke apart, sliding down the sides, bringing the middle layer with it.  A portion of one layer collapsed into the void left by the now missing middle layer, preserving a small remnant of what used to be the very top.  The predominant color of the refrigerator, the counter, the sink of unwashed dishes was a velvety, chocolate-y brown, and like that, my dreams of the perfect Monday cake were dashed.  I sliced a quarter of the most intact cake still standing and packed up slices to take to work.  This is what remains in our house – though hopefully not for long.  Two people should never be left alone with this sort of disaster. 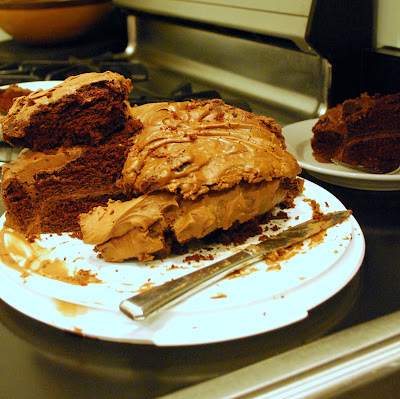 The words that have come to mind as I write about such a trivial little subject like chocolate cake have been seismic, catastrophic, explosive, disaster.  I cannot include any of them, I back up and delete them as soon as they come out of my fingers.  Unexpected, tragic, unfair, disappointing.  They do not apply, they are not allowed.  For days now we’ve seen the images from above in Japan and the graphic contrast of aerial before and after shots are so unreal, so abstract.  Our birds eye view grants us the ability to take in the enormity of a disaster, but distracts us a bit from the street level shot of a landscape of matchstick sized debris.  Oceans and oceans of matchsticks. My aunt (of said chocolate cake fame) has spent the last week having toxic chemicals injected into her.  Our birds eye view shows us on the sidelines in despair, unable to fight this fight with her, angry at a disease that isn’t fair and isn’t just.  We selfishly wish for life that is fair when we can’t even articulate just what that word should mean.  I watch the baby slurp noodles with pesto and think of the soundbite of a shelter teaming with evacuees, lining up for a tiny serving of boiled water to pour over a box of instant noodles, a first meal in four days.  We eat lopsided slices of my aunt’s chocolate heaven, and know how truly lucky we are.