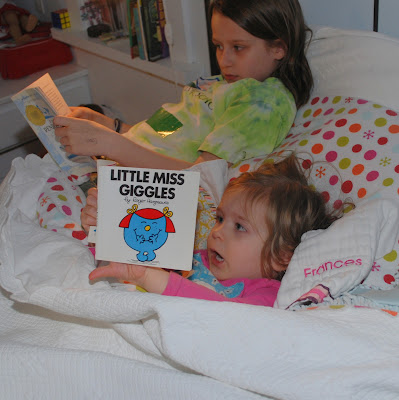 E has reached a stage in her book devouring where she gets so lost in the words on the page that she hears absolutely nothing around her.  You can be just three feet away and speaking directly to her and she doesn’t even flinch.  Repeating her name doesn’t work.  The only effective method of temporarily breaking the spell is to calmly reach over and remove the book from her hands.  Even then she’s kind of like a squished bug that still wriggles a bit after the smooshing.  The book may be gone but I swear her eyes are still darting from left to right in some involuntary way, and after an imaginary line or two she reluctantly returns to this world.  Then she looks at us like we’re strangers who’ve entered a different world entirely.  Which reminds me of the way I’m currently feeling as I read Wildwood.  I think if I let her read that book she may never come back to us again.
F has reached her own stage in book devouring as well – where she gets so lost in the pictures on the page that the words in her mind can’t pour forth fast enough or loud enough or with enough conviction.  She talks and talks and talks and talks, and only stops talking to sing.  She climbs into her sister’s bed to read books with her, and I look at them in there together and realize what an absolutely perfect pair they are.  F has a devoted (and warm) listener to her tall, tall tales, and E could read right through the end of the world and not miss a syllable.  I take a quick picture and then get the heck out of there – leaving them to their own individual book worlds, together.
**Posting may be spotty for a few days because the new computer is here.  Hooray!**