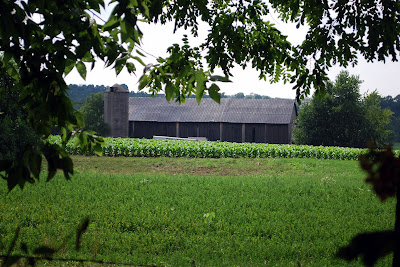 My parents live on this really great lot just off Main Street in the town where I was born and grew up.  If you stand in their backyard and look west this is your view.  Main Street / tobacco farm / Main Street / tobacco farm.  I know – it’s a little odd, but true.  And that’s what makes it such a great place.  From the front porch (or the dormer window in my old room) you can look over all of the downtown area.  From the back porch you can watch the sunset behind the quintessential landscape painting of this region.  You don’t have to smoke it to appreciate how pretty a crop it is.  Perhaps not smoking it actually causes you to enjoy it more…
Let me back up just a few sentences and clarify a bit:  “From the back porch you can watch the sunset…” if you happen to have eyes in the back of your head while you sit on the porch swing facing the opposite direction.  I’m exaggerating a bit here, but there was one little nagging thing about my parents’ house’s near perfection – it did not maximize the views to the west – and those are some pretty good ones.  Over the years they made some changes to the house to address this – adding dormers in the rear office that look that direction, and adding a porch along the north side of the garage wing of the house to better connect the house to the yard.  They have a gorgeous yard and garden (see yesterday’s post), and the porch was nice – but again, it was pretty linear, and kind of “expected”.  Sort of a lean-to against a long, blank wall.  It was nagging at them, and nagging at us.  That’s what happens when you have a couple of architects in the family.
Back up a bit more to Christmas, 2007.  We gave them the gift of a new porch design, and 5 days of manual labor and moral support to go through with it.  Enter a very cute 4.5 year old superintendent in April of 2008.  The work was about to begin.  I posted about this project that April, but other than showing some progress photos (which I’ve included again, below), I never really revisited it on this blog.  We just spent last weekend there – and had a lovely time enjoying those outdoor rooms, and I thought I’d grab the camera and take you on a little tour of the place four years in.  So – first the before’s and the during’s, and then, of course, the after’s. 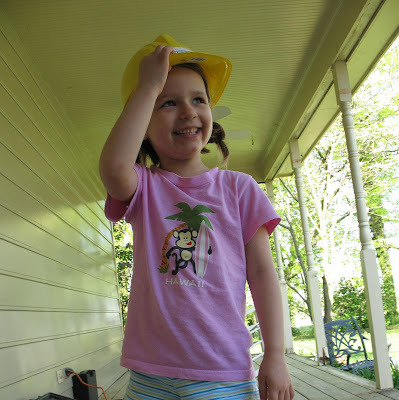 As you can see in the photo above, the porch was long and narrow, and had a couple of issues.  The first is the long blank wall to the left (behind it is a stair to the office above the garage, and beyond the stair is the garage itself), and a series of spindly, undersized Victorian-ish columns that weren’t doing a whole lot for the colonial style of the main house.  I should preface all of this by saying that I’m not commenting on anything that my parents wouldn’t say themselves.  When the porch was first built – well, if you wanted off the shelf columns, that’s what you got.  And they worked – for a good long time – but they were rotting (as well as the railings – already removed in the photo above – just imagine more Victorian-ish top and bottom railings between the columns.)
Our goal was to install new columns and railings more fitting to the character of the house and more proportional to the existing porch, and to create a new outdoor room with a pergola overhead to accomplish a few things:  1.  provide more seating space, 2.  take advantage of the great views to the west, and 3.  create a courtyard area for more formal plantings between the existing house and brick patio / fish pond and the yard beyond.
I have to give my parents complete credit for jumping in with both feet, ponying up the dough to do this entire project in cedar (gulp), and for being pretty game for anything.  The only thing they nixed was my idea to rework the existing pond from its current naturalized look to a more formal / symmetrical pond in the center of the courtyard.  They probably made the right call.  It was unnecessary expense and effort better spent in other areas.  They can now use the money they saved on that decision to replenish the fish stock every so often!  Between the cold temperatures and neighborhood animals and my nephew – it’s needed more often than you think. 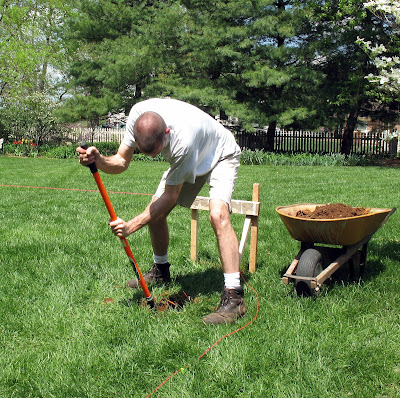 For five days we worked (M and his gang doing the majority of the muscle while I stood around calculating and recalculating each move and giving orders), and then we had something that looked like… 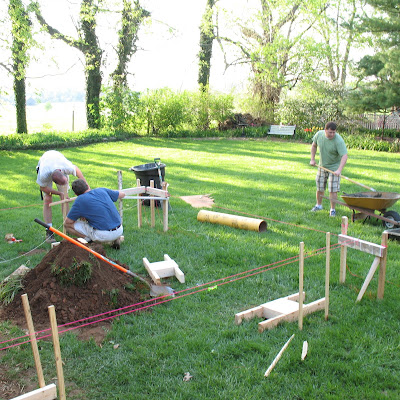 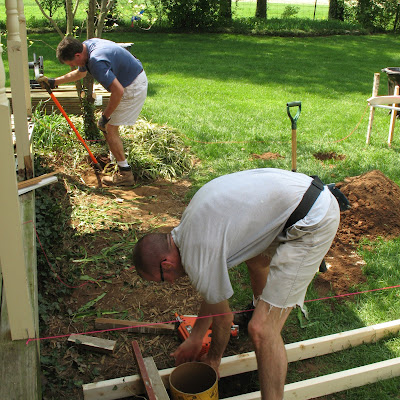 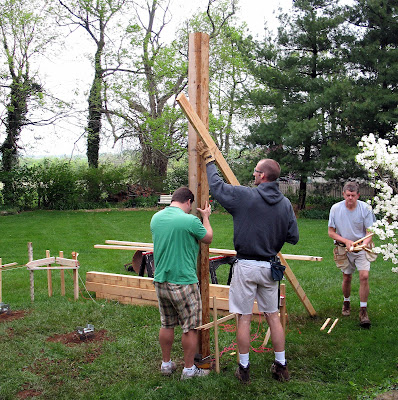 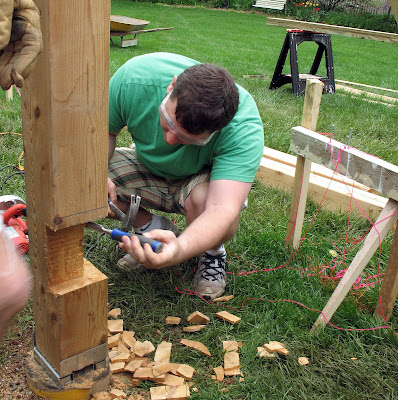 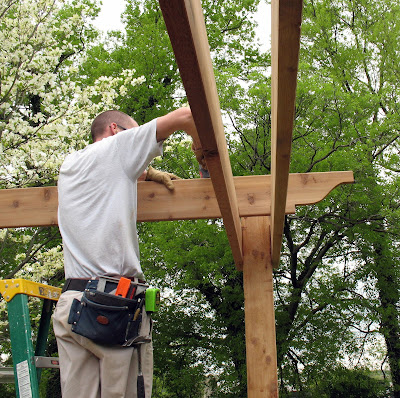 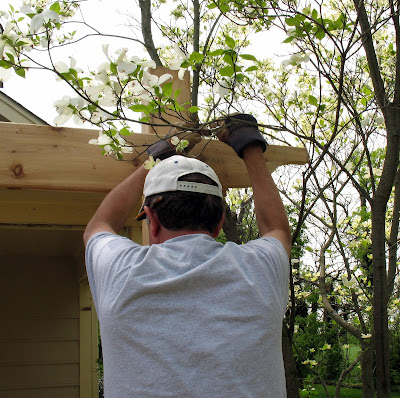 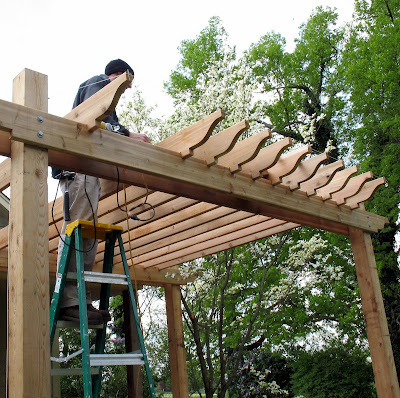 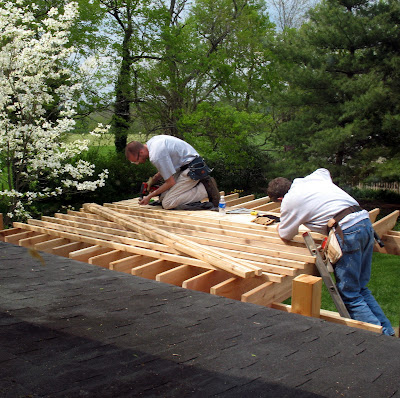 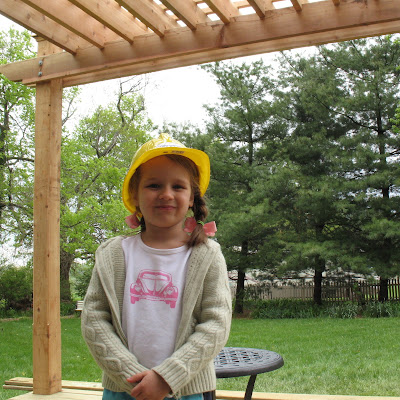 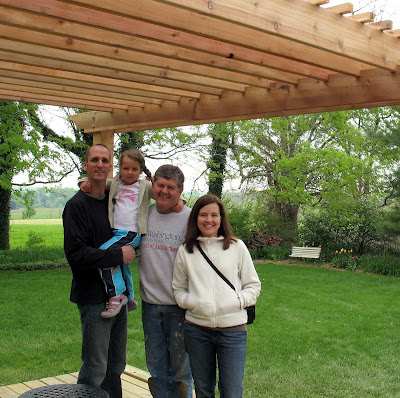 Fast forward to now – and it looks like THIS: 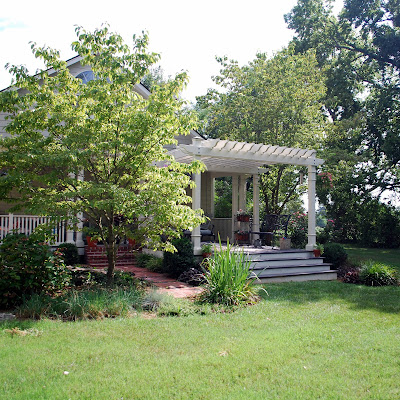 We managed to save the existing trees which have grown quite a bit in the last four years.  My parents opted not to plant any climbing vines on the trellis itself, but the dogwood tree grows up and around it in a similar fashion. 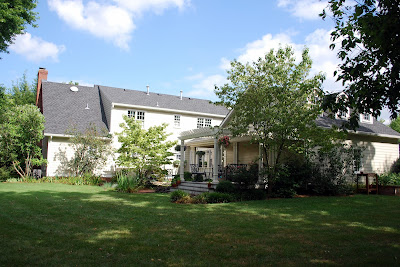 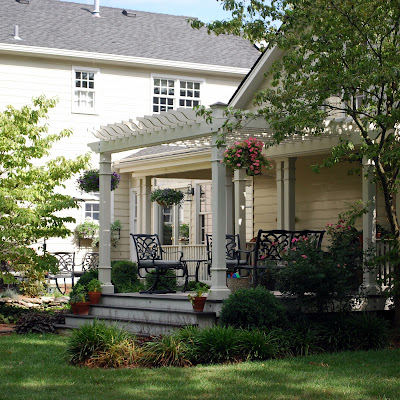 Those undersized spindly columns were replaced by these more tailored double columns.  Doubling the columns up allowed us to get the correct spacing across the length of the existing porch while also transitioning cleanly to the new pergola (with three columns in an L-shaped layout). 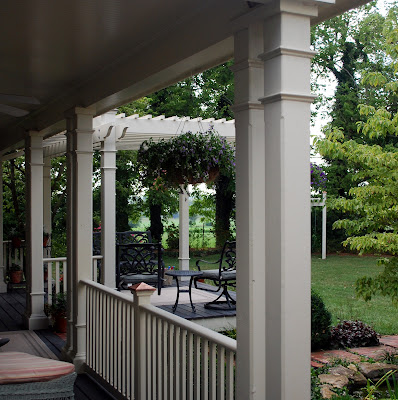 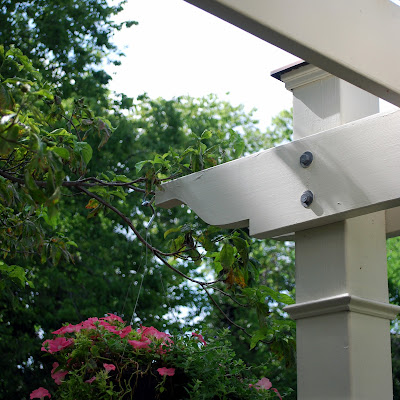 I sketched out the end profile several times on a test board before settling on the template for the others (above).  The original porch also received half posts at the intermediate points to help support the railing (below).  We had originally designed the railing to continue around the two sides of the new pergola, but my parents liked the openness without them, and we agreed.  Furniture helps to block anyone from accidentally stepping off the edge. 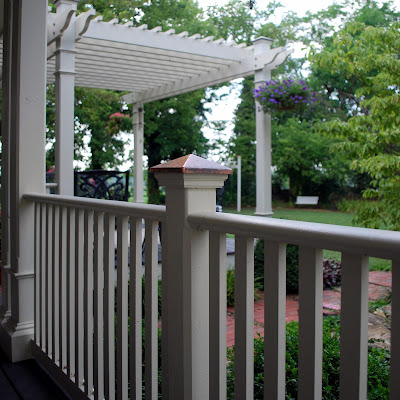 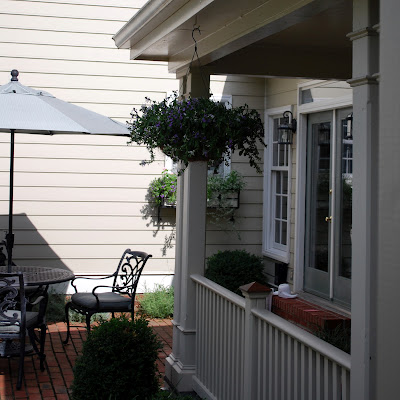 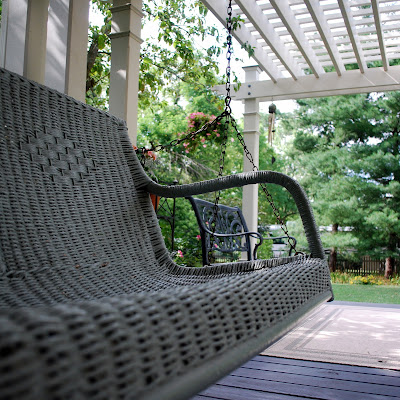 After we left my dad did a TON of carpentry work.  We had mocked up a sample column with routed corners, and various trim pieces.  We left him with eleven others to do on his own.  And then they stained the entire thing with an opaque stain.  And then a semi-transparent stain on the decking.  And then another color stain on the decking because they weren’t thrilled with the first one. 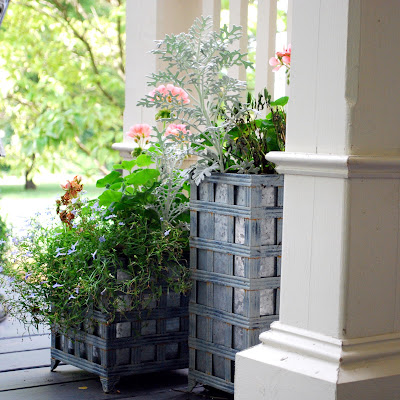 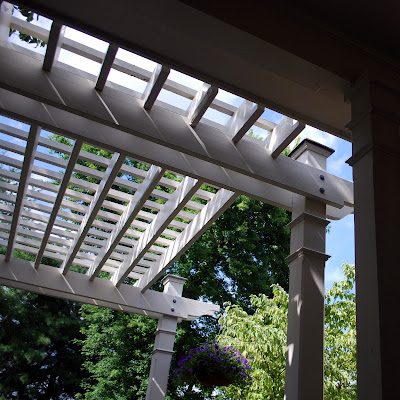 The birds don’t really care a hoot about the deck colors, but they do enjoy this haven that is my parents’ backyard. 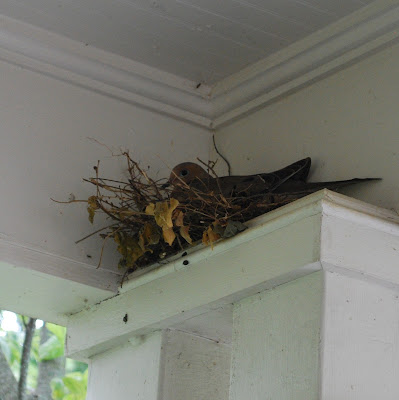 They liked the way the porch turned out so much, they decided to replace some fencing along the basement access stair and incorporate a matching trellis above the gas grill.  My father even lost some teeth when he fell off a ladder finishing this up, but that’s a tale for another time.  (The teeth – new ones – are back in.) 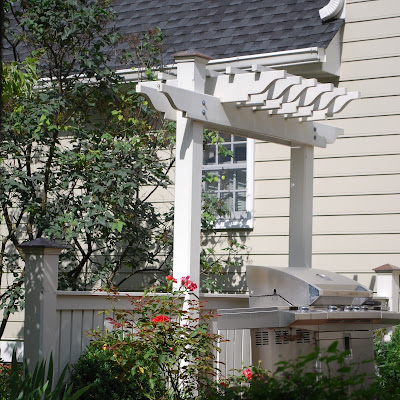 He even made a swingset in the back corner, under the trees, for the grandkids.  They love it out there.  But the best part of it all is that the whole family can now gather there – the kids scatter to the swings, or the yard, they fill the brick pavers with sidewalk chalk masterpieces and they try to mess around in the pond (until they are caught) – and the rest of us can just sit there and rock or swing and watch them. 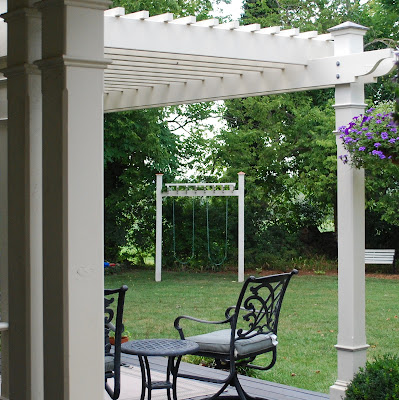 Yes, that’s the best part of all. 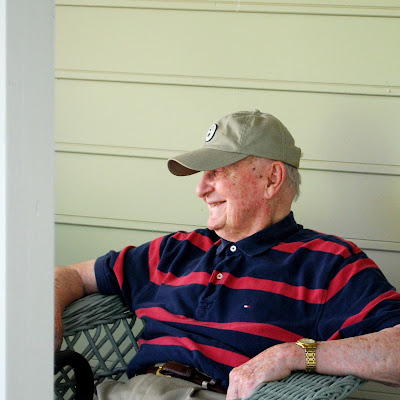