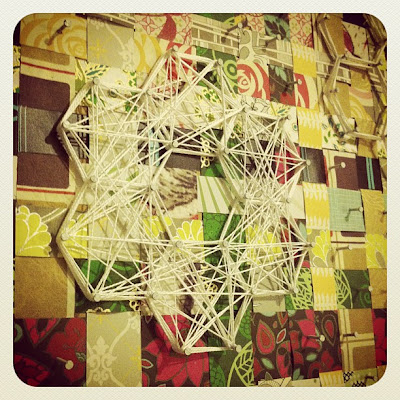 I see patterns in everything.  Repeats.  To me, patterns are very much intertwined with memory.  The little one talks about patterns at school, and in play, and she strings beads in certain color patterns, red-yellow-red-yellow-red-yellow.  She pronounces the word “patt-er-rurn” with three distinct syllables and an ending that rhymes with “burn”.  It takes very little repeat to elicit her claim of a patt-er-rurn.  She often tries to find them in our car, as we drive along.  “Two kids, two grownups – that’s a patt-er-rurn!  Two go to school, two go to work, work-school-work-school, that’s a patt-er-rurn!”  We see other patterns ourselves, in our dealings with her, and her sister.  They tend towards behavior patterns, and the patterns – the repeats – are very, very regular.  Particularly the patterns around one in the afternoon and six in the evening.  Rested child-tired child-rested child-tired child.  It’s a pattern.

Our house doesn’t boast a lot of patterns, at least not at the moment.  The exceptions to this rule are the bathroom and laundry room floors.  We had no existing floors in these rooms in our house – in fact, none of the current rooms were even here when we bought the house, so there wasn’t exactly pattern precedent to recall.  Our house was too simple, too old to have had interior bathrooms of any sort, but, like every house around them, they would change and adapt to new things (like inside toilets) and so we looked to a period flooring style when tiling our new spaces.  We chose a simple white hexagon tile, and we cut out some of those white tiles and replaced them with individual black tiles to create patterns – different in each room.  We spent a lot of time thinking through each of these patterns, and how they would lay out on the floor, and how they would relate to the shape and the size of each room.  When we got up to the third floor bathroom, we chose a simple ring motif, six hexagons in a circle, with a white center. 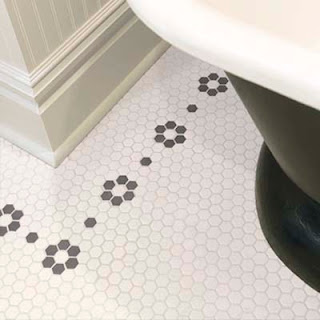 The thing about a hexagon ring is that it really resembles a flower.  You can align row after row of hexagons and not see them, but when you change the color – from black to white, or patterned to solid – the entire field changes.  Now it seems as if you are looking at at something with a foreground and a background.  You start to see a flower, or a field of them.  This is the basis for the traditional Grandmother’s Flower Garden quilt pattern. 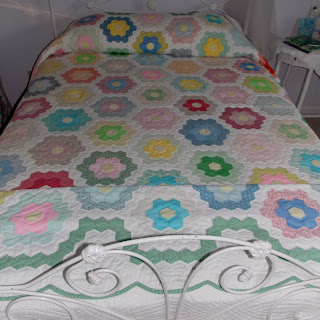 It’s the pattern that was on my bed throughout my childhood, and I can assure you that the shape of it has been seared into my mind in ways that I don’t even fully realize.  I laid across that quilt on my back for hours on end, flying through book after book after book.  I laid across that quilt on my stomach for hours on end, knees crooked, feet in the air, with a phone cord twirled between the fingers on one hand while the other fingers traced the lines of those hexagons as I talked.  Most of the shapes were made of fabric scraps from the dresses my sister and I (and our dolls) wore throughout our childhood.  Some were probably cut from the excess fabric at the bottom of those dresses; oh, the time we spent standing on a chair or stool, rotating slowly while my grandmother’s vintage hem stick moved around the bottom of the fabric.

Last year, sometime in late April / early May, I hatched a sort of fuzzy plan in my mind.  I really enjoyed making the smaller paper quilts a few Christmases back, and I liked them even more when they were all laid out, end to end, across my bed. 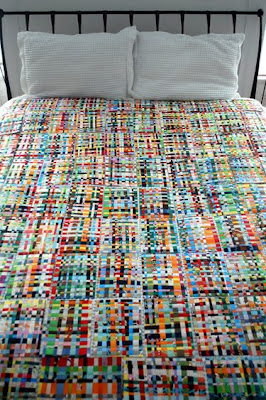 And so I once again returned to my piles and rolls of paper scraps, and I started cutting strips. 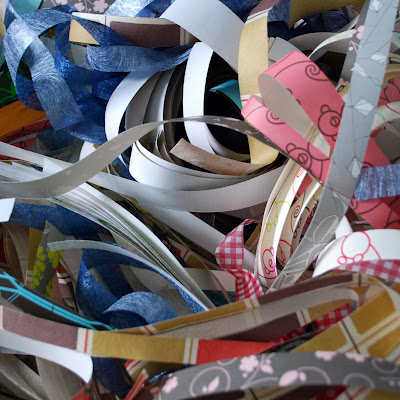 I started small, and wove them on the floor, then the table… 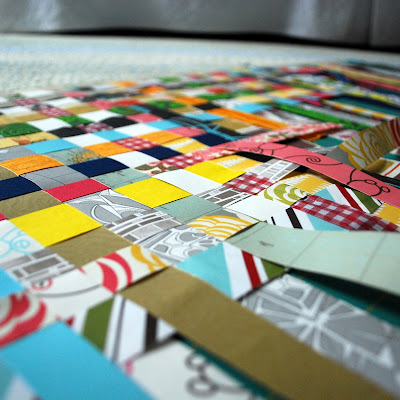 …and later the wall. 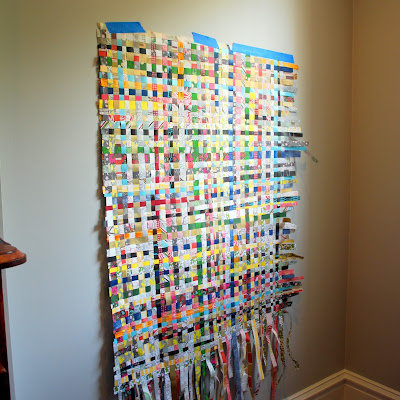 Occasionally we’d have visitors and they’d ask what I was working on and I’d shrug my shoulders.  Occasionally my family would ask me the same thing.  I did bits and pieces, here and there, and I added to it whenever I had new scraps to use up.  I worked by myself, and in the quiet corners of the house.  Sometimes I’d roll it up for a few weeks, or months, and then get it back out again to add to it some more. 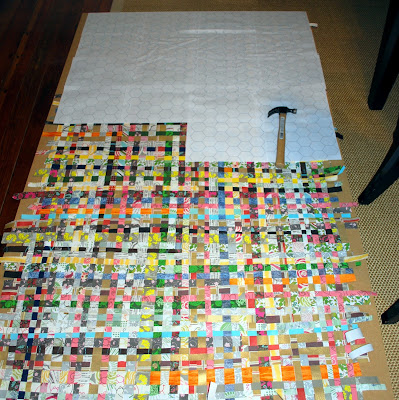 When it reached a comfortable size, I plotted out some hexagons and laid them over the paper quilt, and then I hammered a few thousand white nails into it, and the wood behind it. 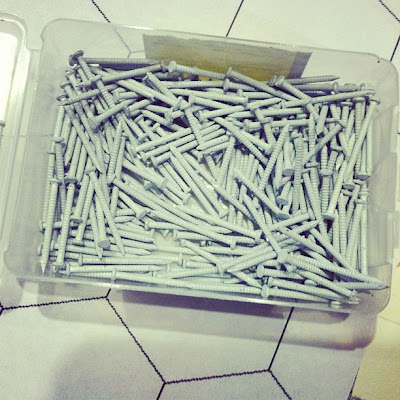 And then I began with the string, skein after skein, winding and turning around those nails, creating the ring of hexagons, the foreground flowers, the background colors.  The pieces aren’t remnants of ruffles and twirls, but they are remnants of birthday parties, and thank you notes, and a thousand holiday cards and two big announcement letters.  They are parts of science fair posters and raffle basket signs and school banners and wrapping paper. 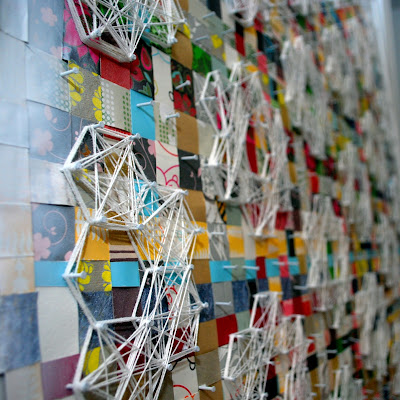 I took advantage of the first dry weekend in awhile, and I trimmed the paper edges, and spray primed the back and sides. 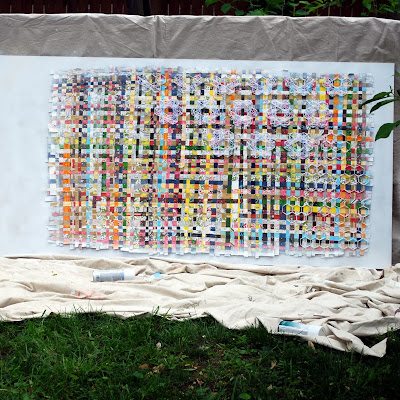 I picked out some simple wood trim, and M fashioned a frame out of it for me, and sanded the edges perfectly smooth. 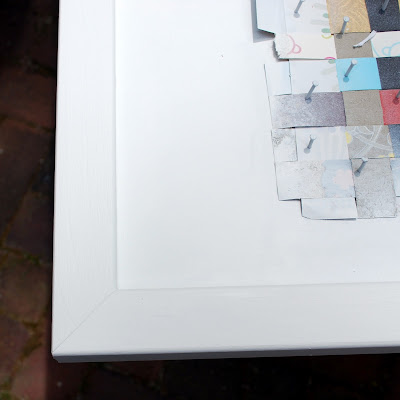 Later, he rescued it from another rain storm, just in time. 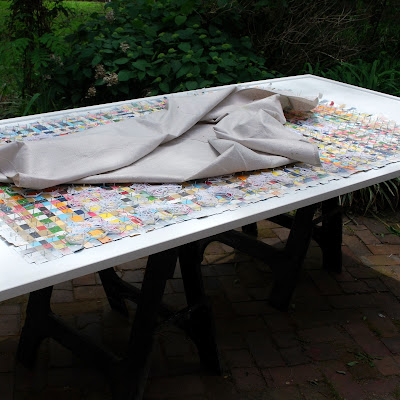 I wanted to finish it on Memorial Day, because it seemed fitting and sort of perfect.  I lost my grandmother two years ago, at that same time, and I had started this project a year ago, and it was ready to be complete and on the wall.  But life never fits quite so neatly into our prescribed time frames, even the three day weekend kind of time frames, and so this rested in the kitchen for a few more days, and I spun grandmother’s flowers out of string after dinner and long past bedtime.

I scooted it through the house on the drop cloth, navigating it at an angle through each doorway, and then behind the couch.

First I leaned it against the wall… 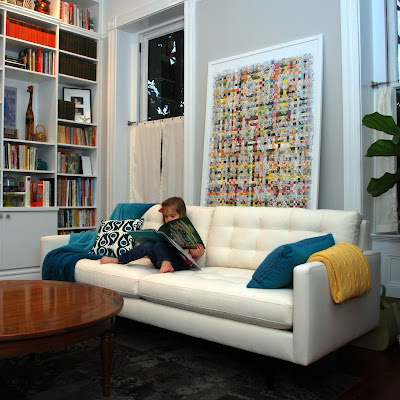 …and then the next morning, M helped me lift it temporarily onto a storage container so that we could look at it a little higher. 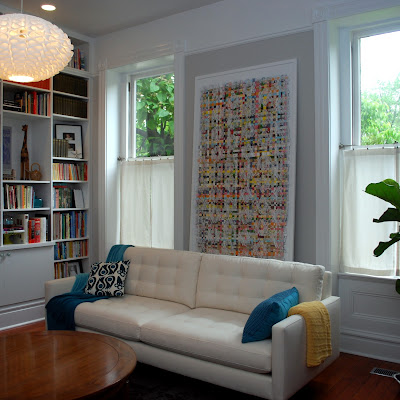 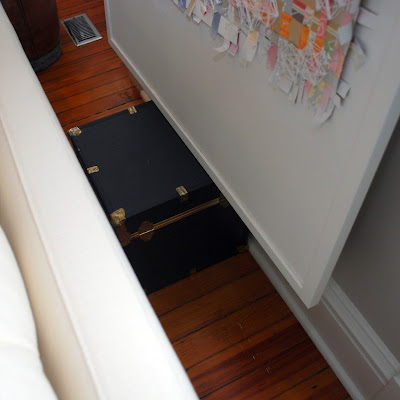 We’ll likely fashion some sort of ledge for this to rest on that bolts into the wall, and then we’ll secure it at the top once we’re sure of the height. 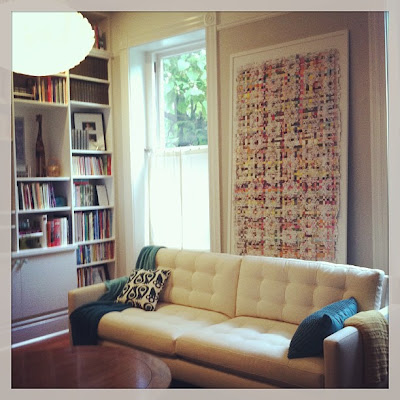