First I dismissed it as a simple sprain, stepping out of the shower (which is really a tall cast iron tub) and feeling a funny twinge.  I iced it and popped ibuprofen for a couple of days and it felt great!  So I ran again, at least four miles – and again, it felt great…
…until twenty minutes later I was hobbling around with a tight ankle.
It progressively got worse, even after visiting the running store to make sure the shoes were still a good pick for my ankle.  Even after stretching and icing and resting.  Well, sort of resting, as in no running.  I was still moving around a lot, but now I wore my shoes most of the time, even indoors.
I went for an injury screening last week, and they narrowed it down to a few things – but I needed to see a sports medicine doctor for ultrasounds / x-rays etc.  He moved the wand around my peroneal tendon, but other than a small (acceptable) amount of fluid it was in great shape.  It wasn’t an inflamed bursa sac – that was what I was expecting because of the little swollen pocket I could see just below my ankle bone, and the pain I felt when that area was pushed.
He said it wasn’t good news at all – unless your idea of good news was a definitive diagnosis and a clear treatment plan.  Hmmm, I said, that kind of is my idea of good news.  It’s a calcaneal stress fracture, a crack in my heel bone, and no wonder I’ve been hobbling around feeling sorry for myself a little lately. 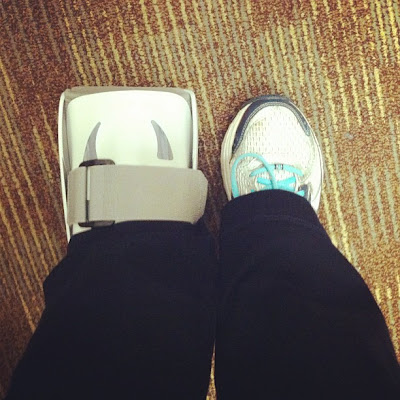 So now I’m booted for two weeks and then unbooted but restricted for another two, before we meet again to plot out how the next few months will look and how I can get back to the exercise that I like to do.  I’ve got rehab two times a week, and he’s upping my Vitamin D intake as well.  Funny thing – I had my annual physical on Tuesday and I got the lab results of my blood work back in the mail this afternoon.  The words “Great!” were scribbled all over it (I have excellent cholesterol levels, mini-back pat), but I have a slight Vitamin D deficiency and my physician wrote me a note to add a supplement.
I’m also going to be working on my hip strength – increasing that to help aid all the rest of the way down my legs as I run.  And my ankle strength and stretching could stand some improvement.  I’ll also be working on my perspective – I think I’ve been relatively non-complaining about it, but it’s been a drag, and I burst into tears when I kept catching my boot on the stairs as I lumbered my way up them.  This is not how I envisioned spending a good portion of my July.
This doctor came with so much high praise from so many people that I found myself surprised that I was still blown away by him and the rest of the staff.  Some doctors see a running injury and just advise you to stop running and take up something a little easier.  But he is a runner, and he said he’d see me in a few weeks to work with me on my running plan.  That was great to hear – because I’m really, really enjoying it, and I’ve been missing it these past two weeks.  I’ll be careful, and pay close attention to my body in the future, but I’ll be glad to be back at it eventually.  This is the second sports related injury in our house this year, and I suppose it might be “safer” to sit at home on the couch, but somehow I sort of doubt that.
I’m sure it would be cheaper.