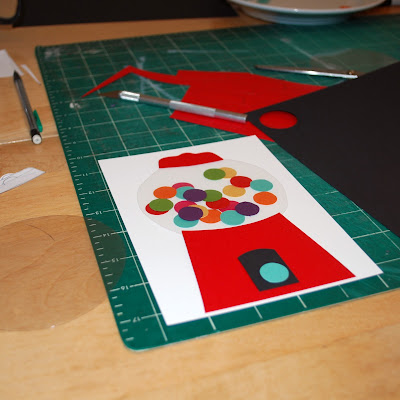 E’s idea for her birthday party this year was formulated around the time she and her sister and dad were making my birthday cake.
They ended up with a lot of leftover gumballs – which gave her an idea! A gumball party for birthday number ten. She’s been plotting out the party for several months now – everything from the guest list to the party schedule, crafts, food, favors. I pretty much just hand it over to her and she runs with it.
Last Friday we headed over to ArtMart to pick up our supplies – colorful paper, clear acetate and envelopes. We got lucky with the colored paper – it’s super thick cardstock with a metallic shimmer to it that is pretty awesome. Later that night we watched a movie together and punched out a zillion gumballs. After awhile the thick cardstock wasn’t so fun – we were both pretty sore the next morning. 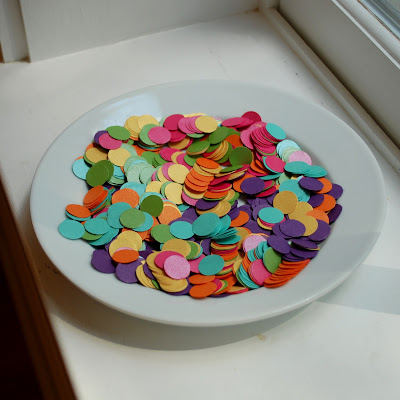 Saturday afternoon we got to work. After making a quick mockup on white paper, we got to work with a ribbon spool that was the perfect diameter for our clear “glass” bowl. She traced, I cut. 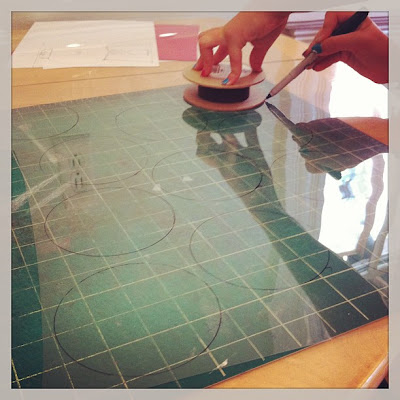 I drew a fancier base, but she didn’t love it. She cut out her own shape, and we both agreed it was simpler and better, so we stuck with that one. We also found some black paper I had around, and made a candy slot at the bottom, and E got the brilliant idea to put a gumball in each one. We laid out all the pieces (without gluing) and it looked great, so then we went to town on nineteen more. 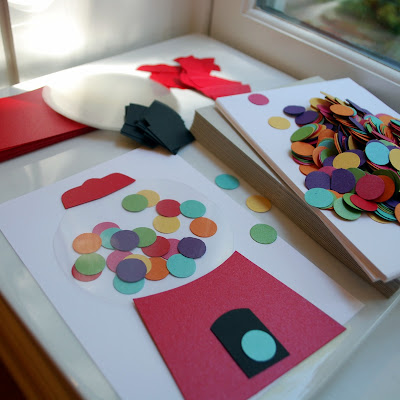 Then we sorted the gumballs by color and laid out groups of gumballs for each machine. 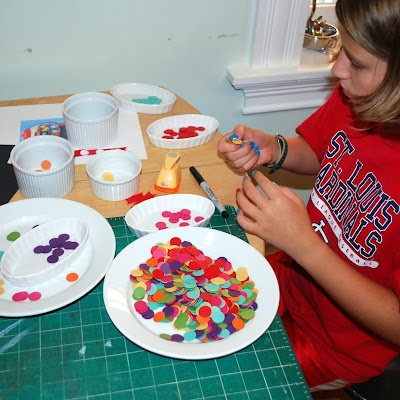 Next came our gluing strategy. You never want to glue to acetate because you’ll see the glue and that never looks good. So we decided to glue the gumballs randomly in the area where the acetate would be attached – we really just had to eyeball it, but it wasn’t too difficult. 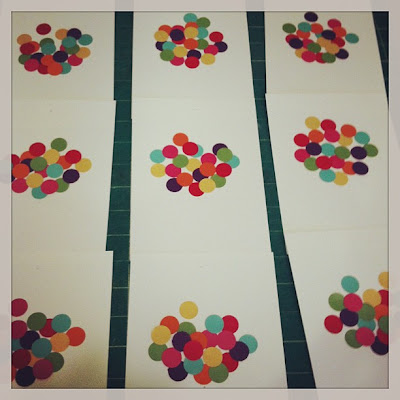 After we had all the gumballs glued on, it was time to attach the acetate. After the acetate-gate nightmare of holiday card 2008, I’ve learned that my favorite glue ever does NOT work on acetate. I opted for the uber-sticky fabric / metal glue I have, and I attached each clear circle with a small dot at the top and bottom that would soon be covered by the red pieces. E worked on attaching the black slot and the gumball, and then writing 10 cents in silver and black – to represent being ten, of course.
We were in the car Friday night discussing the invitations and I said we should have a money slot and then she screamed TEN CENTS! It’s PERFECT! And it is. I love the way this girl thinks. We make a pretty good team. 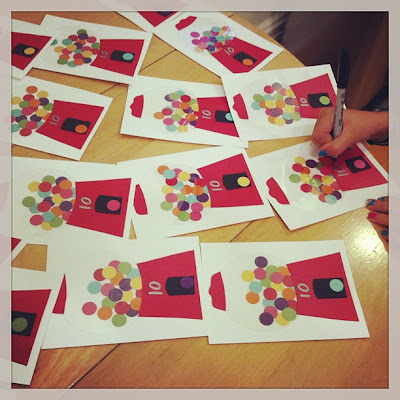