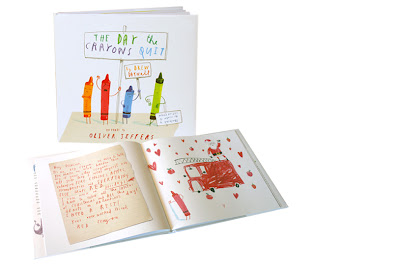 Oliver Jeffers does it again – this time with Drew Daywalt, the author of “The Day the Crayons Quit”. The book is a series of letters that each crayon in Duncan’s box pens? (crayons?) to him about his treatment of them. Red is exhausted from working non-stop, holidays included – all those Valentine hearts and Santa suits. Blue is equally worn down – to almost a stub now – from being Duncan’s favorite color for three years running. Yellow and Orange are in a fierce battle over who is the official color of the sun, and Pink is fed up with being dismissed as a “girly” color. 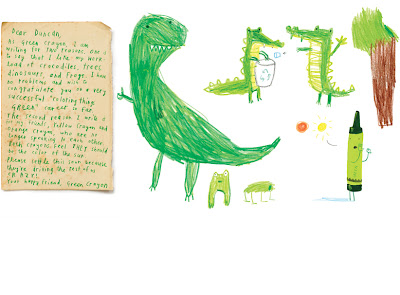 Each color takes a turn expressing its feelings – sometimes frustrated, sometimes content, but always in the form of a polite, well-structured letter. By the time we get to Peach (naked from having his paper peeled off) we understand and accept that Duncan’s crayons have feelings and deserve some respect for all the work that they do and the color they add to his life. F has always been a compulsive paper peeler (which secretly drives me nuts – I was the girl with the perfectly preserved and organized Crayola 64 set, coloring with a technique developed to preserve the point as long as possible), but now that she’s read this book she no longer peels! This book is not only hilarious but it’s a self-help book for crayon abusers! You’ll never look at the underused Beige in the same way. 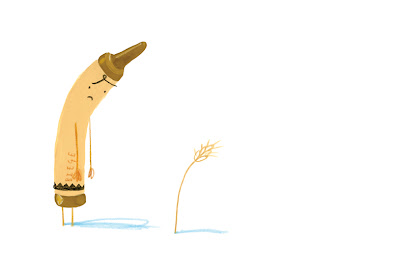 Hooray to Drew Daywalt for the incredible concept and writing in this book, and hooray (again) to Jeffers for creating such a glorious picture book. Tall, thin crayons with floating facial expressions lend themselves to his drawing style, and the handwritten letters on various stationary styles show off his masterful skill at layering found objects – paper, coloring book pages, string, etc – with his delightfully simple and expressive characters and his now famous signature handwriting style.
This book will delight all ages. I’d put it at the top of my list for any gift giving you have in the near future. The girls squeal with delight when we read it, over and over again.
Find these titles at your favorite local independent bookstore. Happy reading!

2 thoughts on “(story)time: The Day the Crayons Quit”