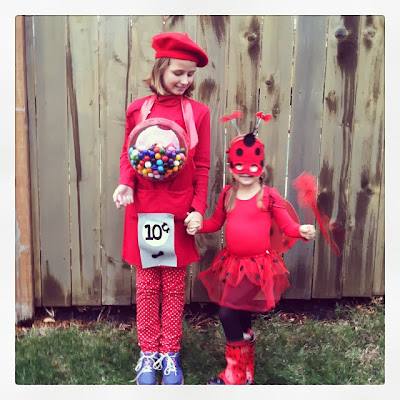 Last week we were out of town from Tuesday through Sunday. The girls were dealing with things as four- and ten-year-old kids might be expected to – in their own (very different) ways they were just trying to understand what had happened and how they felt about it. It’s hard to be a parent and watch your children hurting and confused in the midst of your own overwhelming sorrow. It’s also hard to shift gears when they need you to be more than just a pile of sobbing jello on the couch.
Last Monday night E had finished up the final touches on her costume, and she was completely thrilled with the way it turned out. She had decided to forgo the red ribbon attachment to the “glass” part of her gum ball machine because she thought duct tape might work better. Big surprise there. Actually, the biggest surprise was that she didn’t have any red duct tape in her extensive collection, so we had gone to purchase some on Sunday. She unwrapped over one hundred individually wrapped gumballs and nested them between a small plastic bowl and a large one. Then she attached the bowls to a red plastic plate with the duct tape, and fashioned a neck strap with two long pieces of the tape. She even put a strip over the monogrammed name on her apron to cover it up. She cut pieces out of felt and silver shiny canvas to make the dispenser and we safety pinned it to the apron. The red turtleneck had arrived in the mail on Monday, and the only piece we were missing was the red beret – scheduled to arrive at my office on Tuesday. I never went in on Tuesday.
M took the kids into school (late) on Tuesday for a few hours so that we could get them out of the house a bit, and make some hard phone calls and attempt to pack. As E was walking out the door that morning, she hugged me again and then cautiously whispered “What about Halloween?” It wasn’t a demand at all, it was just a question and I understood it. It’s a holiday she loves – and very little of it is about the candy. She truly enjoys scheming up her costumes and then assembling them and tweaking them and wearing them. She’s not nearly as shy as she was as a little one, but even when she was little and too nervous to even let go of our legs – on Halloween she just came alive. In a costume she’s confident and smiling and happy. I gave her my grownup answer “I don’t know.” Because I didn’t know – frankly, I didn’t care – about that holiday or any holiday for that matter. She didn’t cry or protest, she just seemed to expect that response and she walked out the door.
A little while later, as I was packing the bags, my feelings shifted. I got all of the costume pieces together, and I sent a text to my friend at work to ask her if the beret had arrived. We picked up the girls after a few hours and headed north, swinging by my office so that my friend could walk the package out to me. It was one of the few moments I saw E smile on that ride, and I knew it was the right thing to do. 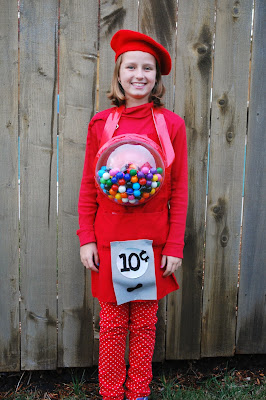 I’ve said this many times before, but I’ll say it again. One of the things I love about this girl the most is how she comes up with an idea and then follows through on it. I adore that process – watching her as she works – and I love the way she lights up when she sees the end result in front of her, as good (or better) than she imagined. 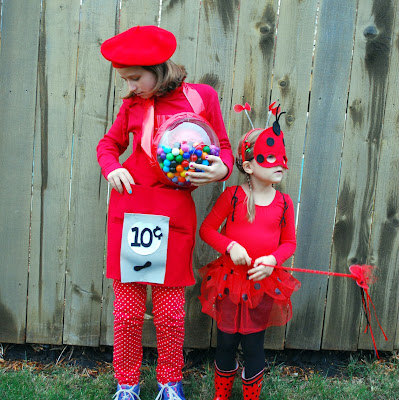 She had enough gumballs left over to fill the apron pockets, and she decided to “dispense” them to the people giving out candy. The forecast that morning was terrible, but the storms rolled through and the sun came out briefly – long enough for us to walk out of the house and up and down two streets. 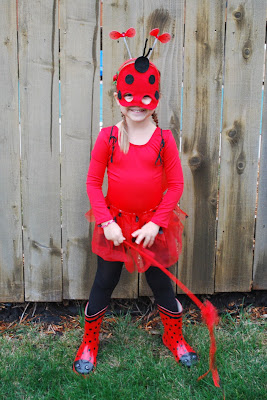 Our Ladybug Girl was quite pleased with the red leotard and the black tights – our new additions to her dress up pieces. I failed to pack any of the pumpkin candy baskets, but it didn’t matter. Grandma had red grocery bags that matched! perfectly and held plenty of treats.
We left Grandpa to answer the door, but not before hitting him up for the first treats. 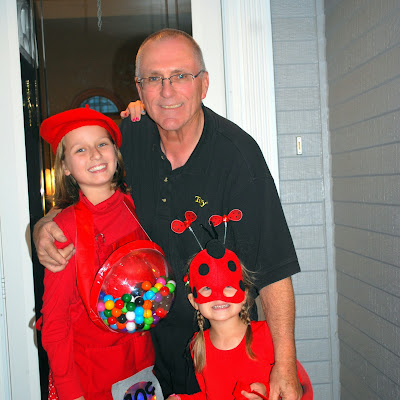 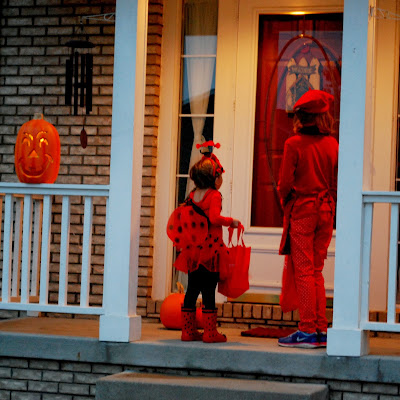 I loved watching F raise her shoulders in anticipation between each rung doorbell and the opening of the door. I loved watching E hand over gumballs and enjoy the reactions to her costume she got from each house. I know there will be many reminders of how hard and difficult and painful last week was for many, many years to come. I’m glad I have photos of these two to remind me of moments like these as well… quiet, expectant, ready to receive gifts, and also to give them.