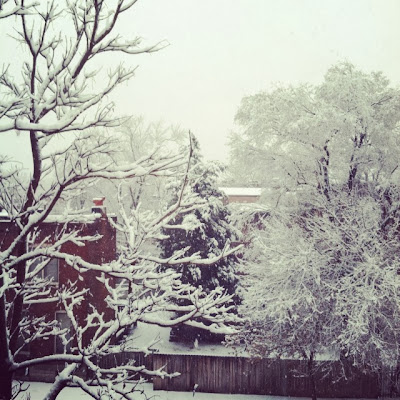 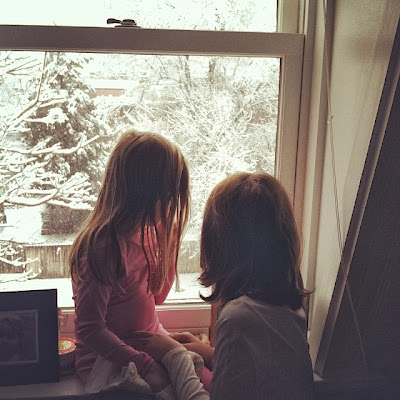 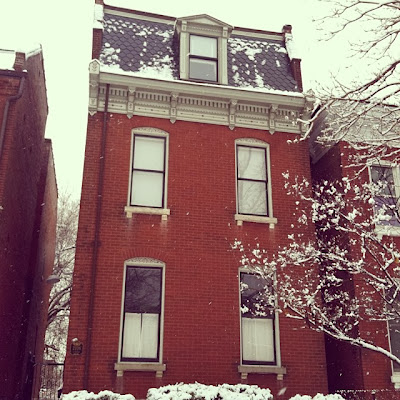 We’ve had a long run of winter weather – cold, snow, ice, gray. Yesterday our morning schedule was pretty full, but then the snow came, and some of it was cancelled, so we bundled up and headed over to the garden. I love that place in the snow – and yesterday’s snow was so wet and pretty. But the skies were gray, and the snow was wet, so it wasn’t really a fun, crisp hike around the place. I took a lot of photographs while I was there, but the trees rained wet plops of snow on our heads and the pictures were mostly blown out – sky and ground the same shade of colorless.

We did have some good laughs at the statues’ winter adornments. Some modesty snow – at least a bit. 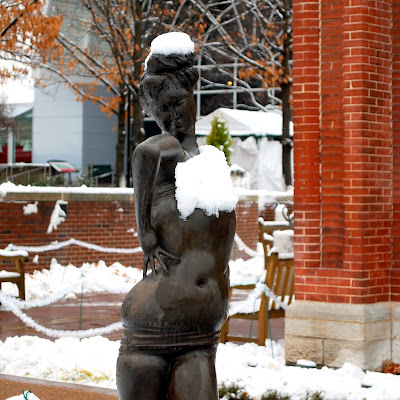 We’re hoping to go back again, after the holidays, to walk through the place at night. It’s the first year for the Garden Glow, and I’ve heard it’s pretty cool. 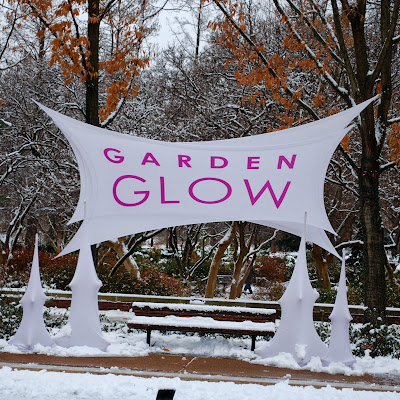 F was convinced as soon as she saw the Wish Tree full of glowing ornaments. 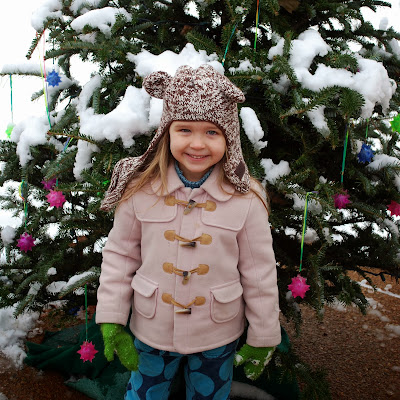 Since the weather outside was a bit of a bust, we headed inside for the train exhibit. It was colorful, warm and full of buzzing trains and buzzing (pretend) bees. The girls did the scavenger hunt like they do every year. I like the picture I caught of the girls working – F intent on her work while E looks like she’s keeping her eyes open for those big bees. 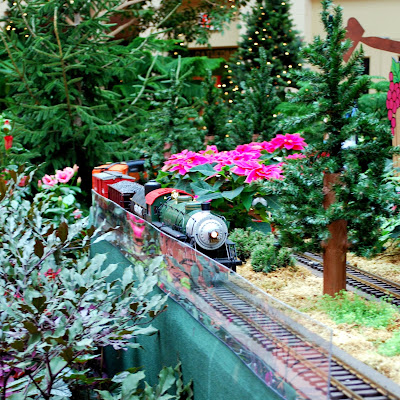 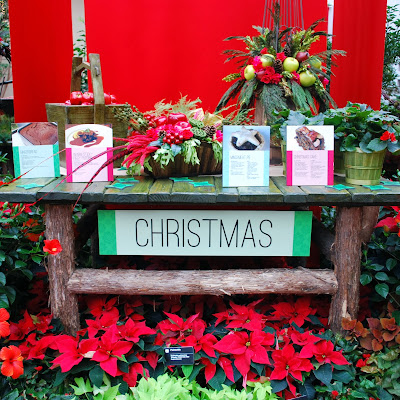 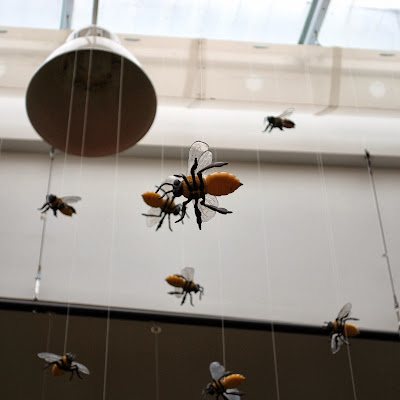 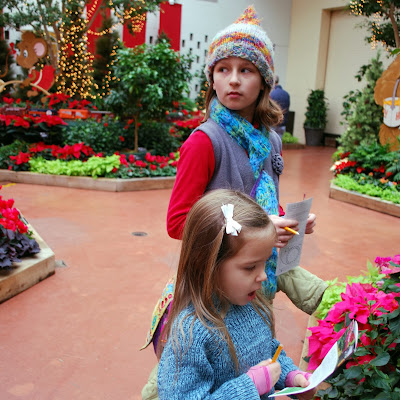 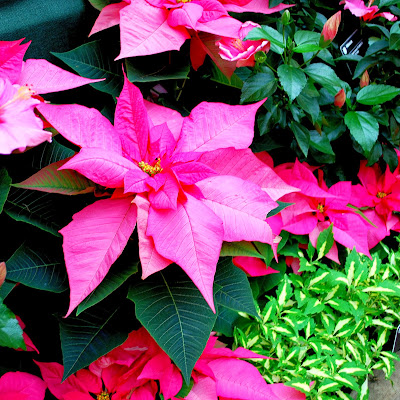 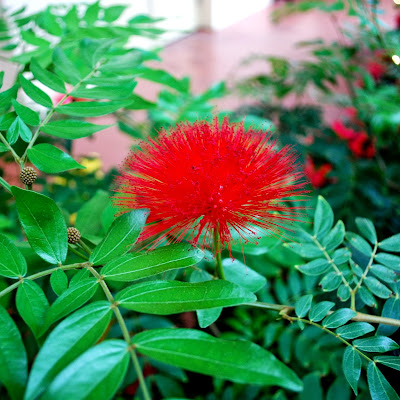 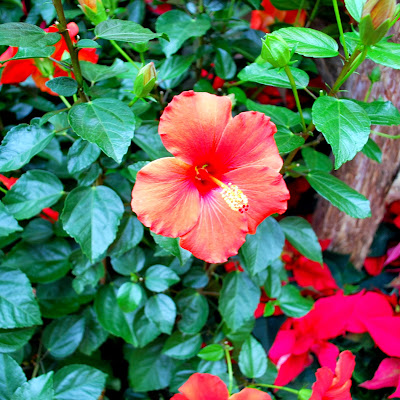 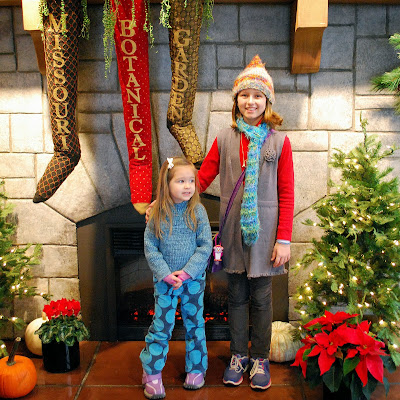 Then we were off to E’s indoor soccer match – a regular Saturday morning event. Two Saturdays in a row we’ve had enough snow for snow angels, but I’ve distracted the little one enough to avoid the soaking wet clothing outside the gym by convincing her to make snow drawings with her boots instead. She tells me what she wants to make, and then I give her directions to shuffle her feet. There’s a big empty patch of snow beyond the shoveled paths, and she thinks of it as her own blank canvas for writing.

The first week she made a heart, circling over her path a few times to make it stick. 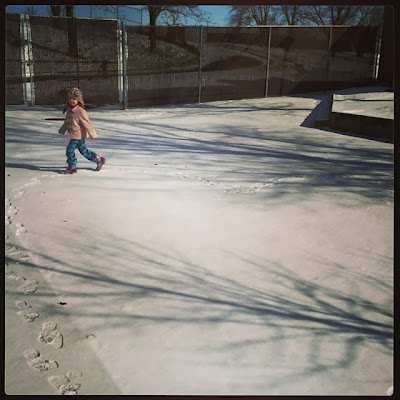 Yesterday she said she wanted to write her cousin’s name to surprise her sister after the game, so we did. 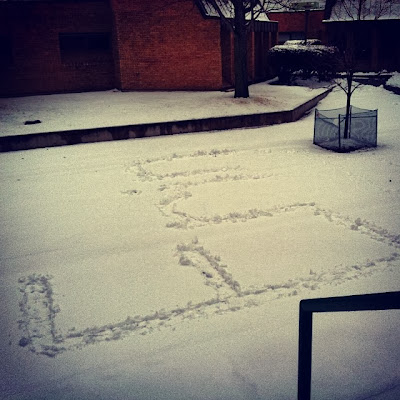 I also found a few photos from the Saturday after Thanksgiving – a photo of an unsure F on Santa’s lap, and another one of a quite sure F in the engine car of a train. She waited a long time in line for a ride, and then she ran to the engine car and placed herself right next to the bell. She rang that bell the entire time, and she had the biggest grin across her face. It took a lot of rotations around the track before I could catch a shot of her in that dark car through the plexi-glass windows. 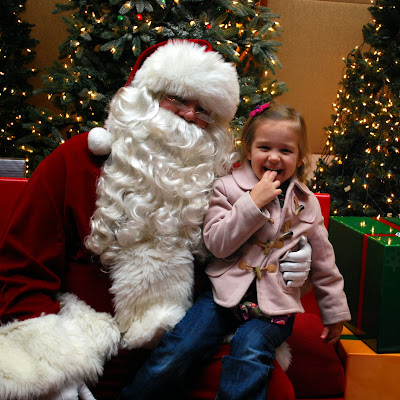 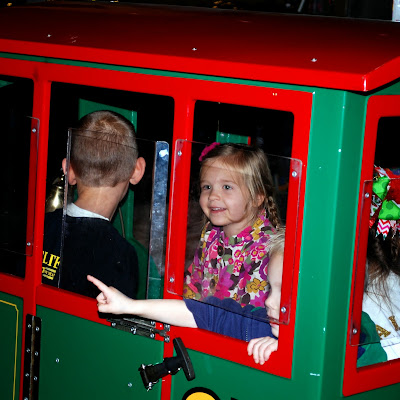 There were more lines for face painting, but once she was up there she sat completely still while she was transformed into a pink tiger. 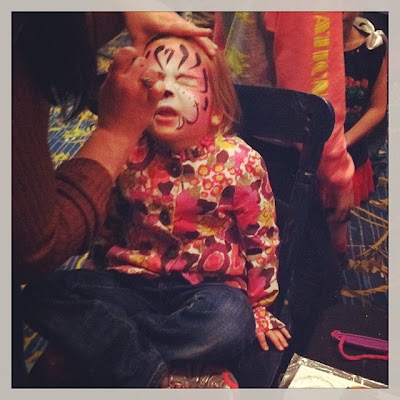 We were at an event to support the hospital where my niece was treated, and in a huge hall of donated and decorated holiday trees we found the one that was decorated for her. It’s pink and sparkles, kind of like this little tiger. 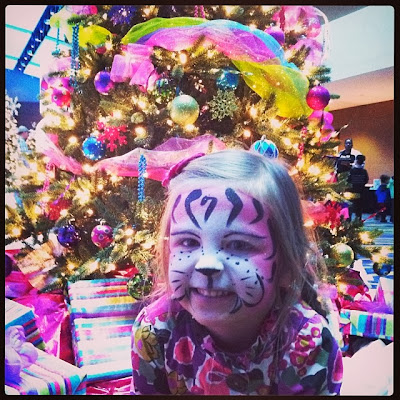 These days are long, and often hard, but it was nice to get the camera out again and see the photos that are on it, waiting. I copied them into folders, and then scrolled through them and saw so many smiles from the past several Saturdays – nervous, confident, posed, sarcastic, thoughtful, joyful, and sometimes pink with sparkles.