Transition is the word that the books use to describe that final stage of labor just prior to the delivery. The word is sufficient, I suppose, in describing the deliberate change of pace from the earlier work to the point that a person’s body is actually capable of turning loose the baby within. But it is far too gentle a word to describe the actual pain and mental endurance that is required to make it through this phase. I would guess that it falls short in its description of the fortitude required by all those assisting in the labor at this point as well. Those that were there are nodding their heads in agreement right now.
The first time around I breezed through this phase in less than an hour, aided by a continuous drip of pitocin and numbed by a steady drip to the spine. I laid back against my pillows and waited for someone to tell me when it was time. This time, with no drips of any kind, my experience of this phase was quite a bit different. After the bag of waters was ruptured (four tries, mind you), things moved rather quickly into this phase. The contractions were harder, they were longer, they were closer together and they were unbelievably hard to get through. All efforts were concentrated on breathing through each one, which left the rest of my body weak from exhaustion and strain. Every few contractions I tried a new position in an effort to rest a portion of my body for a few moments. My husband held me, my mother held me, my nurse held me, and each in turn kept me focused on what was at hand. Panic set in. Tensions were high. The lulls in between were so short but were long enough for me to find my voice, and voice I did. I begged for help, for relief, for a new way to stand and take the pain. Hands rushed in, cool washcloths were there, gentle reminders that I could do it got me through each one. I was focused, then disoriented, at times giddy or ridiculously polite. I made jokes, I screamed in agony, I demanded drugs and then bit down on my lip and just did it. A complication arose, but the team of doctors and nurses worked calmly and efficiently and tenderly through it, and at last I was given the green light to push. The beauty of doing this without drugs was that I didn’t need that final permission. I knew it was time, and just like the books had promised, the thrill of being able to do something productive rather than just enduring something out of your control made the world of difference. The baby bed warmer was turned on, the lights in the room were changed, the tone was celebratory. This circle of people who had gotten me through those last hours were gathered around and ready. Three contractions and ten pushes later she was out, every last messy, glorious inch of her free. 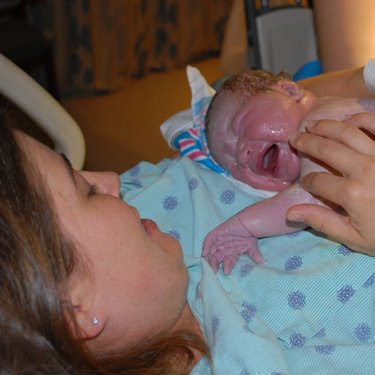 “A daughter,” we wept, overcome with joy. “You are my hero,” I whispered to him through the din in the room. “You were amazing,” he whispered back and left my side to hold his girl.
…..
Happy one month birthday today, my sweet girl.

2 thoughts on “transition is such a gentle word: a birth story, part four”