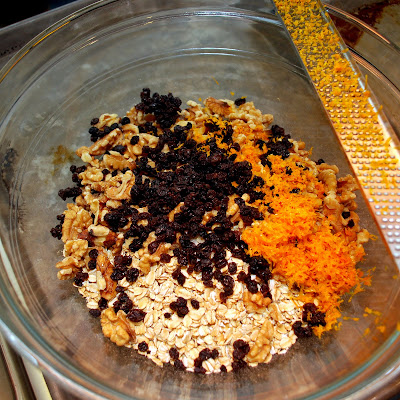 I know it’s a little lame, and my friend P is all like “homemade granola is so yesterday” since she’s always got a batch coming out of the oven, but it is sort of new to me.  Well, maybe not new, but overdue.  And after a long, long, so very long day of meetings (which, to be quite frank, is also sort of lame for a Sunday, even though one was at the house of the aforementioned P), and then a drive home in the cold rain that is closing out what used to be a lovely weekend of weather, the experience of puttering around the kitchen is just what I needed.  That, and apparently, really long run-on sentences.
E and I went to restock the kitchen last night, which was no small feat after the past few weeks of travel and triage.  Which is sort of how life feels right now, triage, and it’s never good when it trickles down to the food we eat.  Road food is one thing when you’re on the road, but eating fast and furious when you’re not just feels really wrong to me.  The two of us, list in hand, tore up four stores in an effort to replenish our stock.  I don’t really like those kind of marathon  grocery sessions, but sometimes you just need them.  Tonight I put together some granola for the grownups (because it contains walnuts), a spinach strata to pop in the oven for breakfast tomorrow (and then eat leftovers for lunches), and got the stuff together for dinner tomorrow night.  This morning’s breakfast was a big hit as well, and nearly got me through the endless day til I could come home, put my feet up, and hit the kitchen.