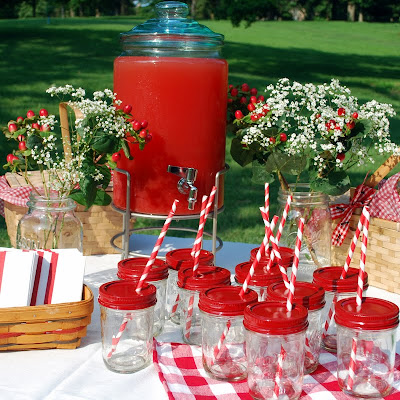 I think the mason jar sippy cups were one of my favorite parts of the party prep, and seem to be the one most people ask about.  I got the idea straight from here – I actually saw them just before the party, so they were a bit of a last minute thing.  I called around about pint jars in a case of a dozen – that was the trickiest part of the whole process.  One grocery store carried pint jars but they were short and squatty and the straws would have just tumbled out the top.  I finally found these at Shop-n-Save for under $7 and I thought we still had the red spray paint from E’s Lego costume years ago but didn’t, so we bought a new can for $2.50.  After washing the jars, M tried to drill through the lid but it didn’t work.  In the end he thought of a standard hole punch which worked perfectly.  The lids on these particular jars were thin enough that you could do that with a little effort – if you have jars with thicker lids the drill might work better.
The lids and rings were sprayed twice, then washed again and assembled.  Paper straws from here – a must visit party supply site if you like all things cute and clever – like those giant balloons.
Everything else for the party was borrowed or collected from around our house or my mom’s.  We’ve had stacks of baskets and mason jars sitting around for a few weeks, and the house looks suddenly empty and less picnic-like without them.
Thanks to M for most of the party pics – I forgot to credit him in the earlier posts.  He manned the camera while I transferred sticky icing poppies to sticky icing cupcakes.