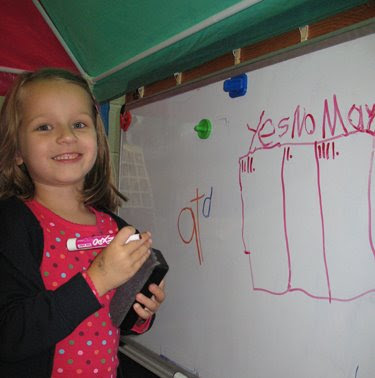 So, this evening we had our violin pick-up night at school. The kids have had classes for a week now, and they’ve been sized for their instrument. E was a size 1/10 – so I’ve been trying to picture what one-tenth of a regular violin would look like. Pretty darn cute is the answer (although it’s not really one-tenth the size). Unfortunately hers won’t be in til tomorrow or Wednesday, but they don’t have class again until Thursday so that’s just fine. Since the kids grow and their violin has to grow with them, most just rent the instruments until they are older. We chose to rent a gently used one rather than a brand new one. I’m still trying to imagine her playing one, but I know she’s very excited to try.
Filling out the paperwork only took a couple of minutes, so we wandered into her room to see what had changed since this morning. One of her favorite places in the room is the dry erase board underneath the tent – she and a few of the other kids in her room went there immediately and began to set up tally charts. Tally charts seem to be all the rage in kindergarten this week. E’s survey question was simple. “Do you like to read?” Kids and parents and siblings were asked and tallied. And when we told her it was time to go, she and another little girl said their next question should be “Are you ready to leave?” And then they would answer that question with a resounding “No!”
Funny she should be so into polling, because just yesterday I decided to do something a bit out of my comfort zone by volunteering to do a little campaign calling. It’s a part of this Neighbor to Neighbor program and the set up is pretty neat. For those of you who know me well, I take politics and voting pretty seriously. I’ve been plugged into this presidential race for a very long time, and I’ve read and listened and thought about and discussed a lot of these issues with a lot of people that I’m close to. I don’t talk about them very often with those that I don’t know well. I ramble a bit here and there on this blog, but I try to keep things pretty civil and only get riled up when I feel like someone’s taken a cheap shot. For some reason though, this time, it doesn’t seem good enough to me. It’s not good enough to just make up my own mind and show up on November 4th to cast my ballot. It’s too important to not be discussing these issues and voicing these concerns with others. I may have my mind made up, but I’ve discovered two things as I’ve started making these calls. The first thing I’ve discovered is that people are still undecided, are tuned into what is going on, have certain issues that they feel very passionate about, and are looking forward to the upcoming debates. The second thing that I’ve discovered is that, in general, people are pretty willing to talk about their feelings on the candidates in civil, courteous tones, and are taking their role as a voter very seriously rather than throwing themselves into one preordained camp or the other. We so often see the extremes on both sides, and I find it comforting to know that a lot of people aren’t accepting what they hear (or read) at face value, but are instead listening, listening, listening to the whole story. We cannot let ourselves get to the point where we can’t discuss who we are voting for and why, and we certainly must not stop listening to others when they open up to us about it. I have some friends, and some family, and some readers who will cast very different votes from mine in this next election. But we owe it to each other to be able to talk to one another about it.
I am supporting Barack Obama for President (not too tough to figure out with the big campaign website link above!) I’ll probably talk about it more between now and then, but if you’re curious why – then feel free to ask. It’s too important not to.
…
E and I talk about a zillion different things on the way to school in the morning and occasionally it’s about the election (remember her funny voting story here?) The other day she told me that if she could vote, she’d probably choose the same as me and her dad because she thought we were pretty good at picking things out. I told her that when she was old enough to cast her vote she would be more than able to choose for herself. And then she replied “I think Barack Oklahoma will still be just fine with me!” 🙂
I think she should steer clear of polling until she gets the name right, and stick to her day job, which this week just happens to be “Tidy the Room Specialist”. That is a killer title. 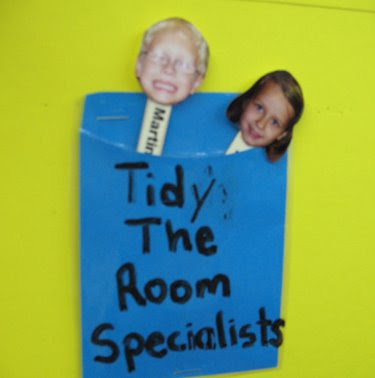