I was just commenting at work yesterday that I never really experienced serious pregnancy cravings the first go-round, and I haven’t had very serious ones this time. I always crave fruit, but that’s not too a-typical for the non-pregnant me. I had a thing for strawberries last time – I ate them every day for the last seven months of gestation. But I don’t recall waking in the middle of the night, rousing my partner and demanding that he get a basket of ripe ones…NOW. I remember distinctly those foods that I was repulsed by, the smells that sent me over the edge, the taste of foods as they came back to me as something enjoyable, not just something to be endured for awhile before they made their return trip back up and out again. And I will never forget those few foods that I will never be able to even look at again. Namely things that are recommended for nausea…they didn’t work, and they were way worse the second time around. Ginger crystals, ginger ale, flat sprite, stale saltines, and that sacrificial bowl of Cranberry Almond Crunch that I ate every morning and then revisited moments later.
But the last few days I’ve had glimpses of those yearnings, those longings that have been exaggerated in sitcoms and movies about irrational pregnant women and their unfortunate partners who have to cater to their every whim. When I was holed up on the couch for four days straight last week, my husband kept trying to entice me with new and different foods. He offered to get me whatever I wanted from the deli across the street, and after I put in the order I called back down the stairs to remember the pickle – make sure they put one in. How cliche. Ten minutes later I could smell the pickles before he made it to the second floor landing. There were two wrapped with the sandwich, another half dozen on the side. “You know my wife’s pregnant?” he asked the Deli-man. “Make sure they remember the pickle.” Deli-man did not disappoint. One day a co-worker opened a small container of baked Cheetos. I drooled. She got up from her seat for a moment. I had to talk myself out of snagging a couple. A commercial for hot wings played across the screen last night…and then I wanted a steak. Today, as I was being driven home through the slick, snowy streets I could imagine with such intensity what a restaurant hamburger with mayo and BBQ sauce and a few crispy onion straws on top would taste like that I still have that smell in my head three hours later. It doesn’t matter that I would have eaten a quarter of it and pushed the rest of the plate away. That was the absolute best pretend first bite I’ve ever sunk my teeth into. Don’t even ask what the smell of coffee or a Guinness does to me. It’s not pretty. According to my family, I stare dreamily out of the passenger window when we pass a Starbucks. E already predicted where I would be on the morning of July 18th (I’m due on the 17th)…first in line at Starbucks. I told her that I would still be in the hospital, but assured her that they brew Starbucks in the hospital, just a short phone call away from my bed. And I appreciated the thought, and the attention to what I like, even the minor, simple things I’ve had to give up for awhile. And I appreciate the fact that she wasn’t imagining me lining up for that Guinness…
About a month ago, and just a few days after we had broken the big news to E, she became obsessed with the do’s and don’ts of pregnancy. She was particularly interested in the types of foods that I could and could not eat. And she worked tirelessly on little reminders for me in the backseat on the long car trips while I tossed my cookies in the front seat. This was one of my favorites. Translation below: 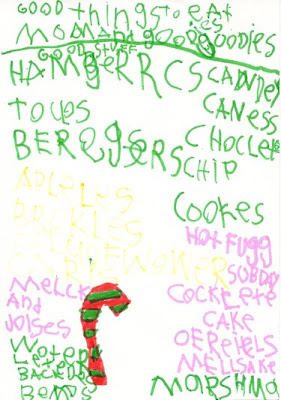 Goodies: (she reminded me I should only have a little of these)
Candy Canes
Chocolate Chip Cookies
Hot Fudge Sundae
Chocolate Cake
Oreo Milkshake
Marshmallow