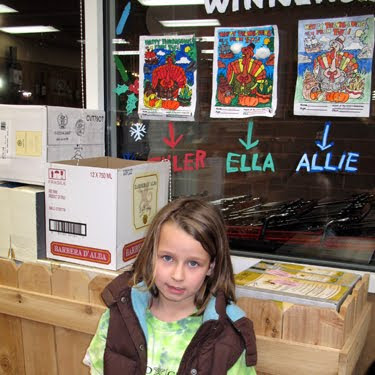 The Thanksgiving picture that I posted on that day was actually a coloring contest for our local Trader Joe’s. One late October evening we were in the store and at the end of the checkout lane (along with the requisite balloon) she was handed a blank page. Later that night she fell madly to work. Long after her light timer went off I found her at her table, in the dark, coloring away. She had turned on the hall and bathroom lights and had spent awhile angling her white painted door to bounce some of that borrowed hall illumination into her room. She demonstrated this when I discovered her and asked her if she had gone blind yet, and why on earth she was still coloring two hours after her bedtime. “I think I’ve got a real shot here Mom. And puffy clouds just might do the trick.”
Well, she was right. Less than twenty-fours hours after she had speculated that they should have selected some winners by now she received a call from the store. There would be no waiting of course – we had to head over there right away. All the way there she talked about the honor. I could tell that she was so excited – excited that the voicemail had mentioned the word “prize”, but even more excited that she was going to get her name painted on the window. We pulled into the parking lot from the back way, driving past the store and then turning down one of the lanes. She craned her neck to see it – that clear silhouette against the bright lights of the store. “Take my picture in there,” she said as she reached for her seat belt – my kid who never volunteers herself very eagerly to the camera. “I have a feeling I’m going to want to remember this for a very long time.”
…..
Do you remember the first prize you won, the first contest or raffle – maybe even a coloring contest? So do I. I don’t think she’ll have any problem remembering.
…..
And then later…an errand on the way home to pick up something for work. I lost her for a moment or two – not quite to frantic levels, but calling her name a few times as I looked through the aisles. I found her in the back corner like this, and my camera was still in my bag. Obviously plotting for coloring contests in the future. She’s got the bug. 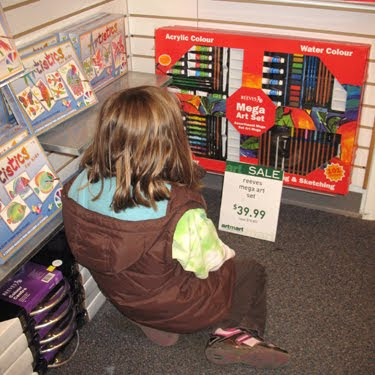