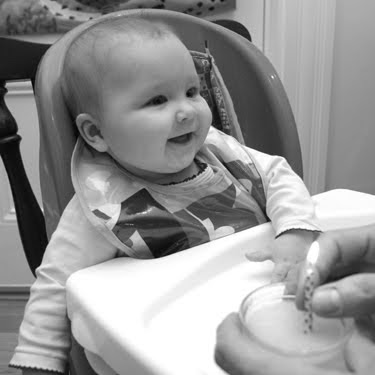 We thought about getting some type of dessert to celebrate this milestone, but after a very rich and yummy breakfast at Local Harvest and an afternoon of errands and projects around the house we decided to have a pie of a different kind – Chicago deep dish pizza (new recipe – yum) and put a candle in food #3 – steamed pears. 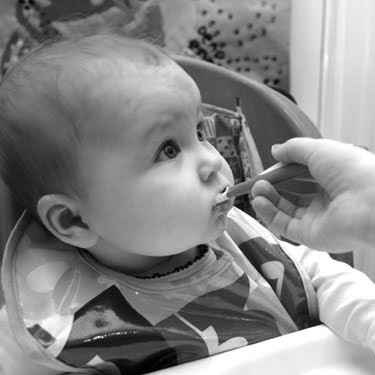 This week we’ve not been able to shovel in the winter squash fast enough, and pears were met in the same delighted fashion so I don’t think the lack of dessert was noticed. And we weren’t left with a lot of extra cake or pie – except that savory pie, of course. 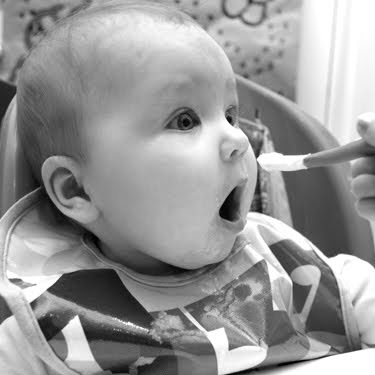 It’s been a fun week of firsts, and a nice lead up to this half year mark. After months of quietly drifting off to sleep at night, we’ve had a few nights of angst as our roly-poly-oly flips to her stomach and then protests the action until flipped back again. The first night it took about three flips before she tired of the game and went to sleep, last night I gave up at seventeen and told her she’d have to work it out on her own. Which she promptly did, and hasn’t gone back since. I miss seeing that sweet little sleeping face looking up at me when I come into her room at night, but that sweet cuddly bug on her tummy is nearly as cute. I think the tummy is here to stay. 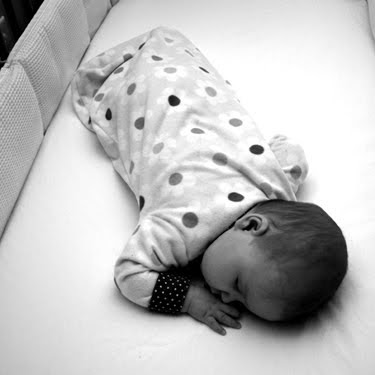 Lots of transitions this week, to solids, to tummies, to the downhill slide to one year. Each morning I ask her to slow down a bit when she babbles up new sounds at me and manipulates those tiny fingers around more complex things. Each night, as I hold her and feed her and read her to sleep I stop asking and start begging. After all the excitement of pears(!) and a candle tonight, she was extra sleepy before bed. I gave her one last snuggle and final plea to slow down a bit and she opened one eye and grinned her big grin and snuggled in a little closer. I suppose as long as she wants to snuggle, I’ll be okay with her growing up. But ahhhh – six months old is an age worth freezing, or at least pausing for an extra bit of time. I’ll let you know if I find that magic button somewhere.
…..
Happy half birthday my sweet, sweet one.