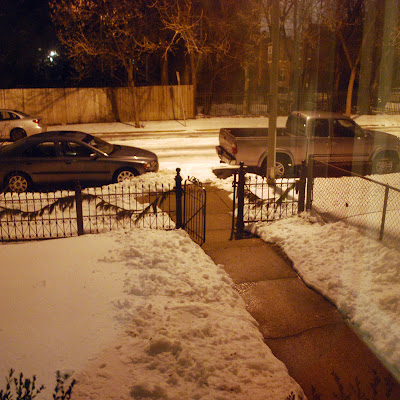 A couple of hours later, a path was first shoveled, then chiseled out.  It’s nice to once again see a glimpse of pavement – although the snow drifts still have to be traversed to get into the car.  There’s no complaining though on my part.  Kudos to those who actually shoveled a whole driveway of this miserable combination.  And the street?  Don’t get me started.  Its glaze / freeze / glaze / freeze cycle has created an intersection that is impossible to stop for.  You just sort of glide to the nearest cleared road.  Ten points if you don’t hit anything along the way.
(And yes, that is our Christmas garland still on the fence.  Come on over and untwist all those little wires in the freezing cold…)