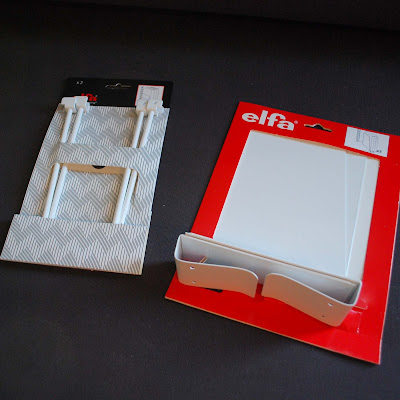 I typed the title “shelf control” before realizing that it might come across as a play on words for “self control”.  Self control is something I like to think that I practice, although last night I might have pushed it a bit with that pizza.
It also eludes to my 52 projects project this week which still isn’t done (at 7:32pm Sunday night) but my husband has allowed me to blame this on him because it was done, but he had “comments” and now we plan on a few revisions after E goes to bed tonight.  So expect a late post – or early morning, depending upon how it goes.
Last night we stopped into The Container Store to pick up a sizing catalog of elfa components.  We’ve used the system before in the room that was first a studio, and then a nursery.  It’s a nice system, and even nicer when you buy the components during one of their 30% off sales.  We’re thinking about using the system again in the back room to set up a wall of shelving and desk spaces.  I cannot tell you how excited I am at that prospect.  I’m very ready to get the computer and the desk out of our bedroom where they’ve been camped since the baby took over the studio.  I’m not complaining.
Well, maybe just a teeny, tiny bit.
While we were in the store we saw these two new products.  I say “new”, but maybe they’ve been around for awhile and we just didn’t know about them until now.  The product on the left snaps into the upright standards and keeps books and other items from getting knocked off the desk.  The product on the right is a pair of bookends that slide over the front of the shelves. 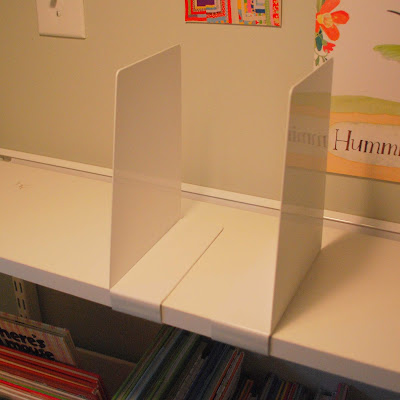 Which is pretty nifty – but even niftier when my husband points out that we should slide them over the back of the shelves and make them even less noticeable.  See – mostly I really value his comments. 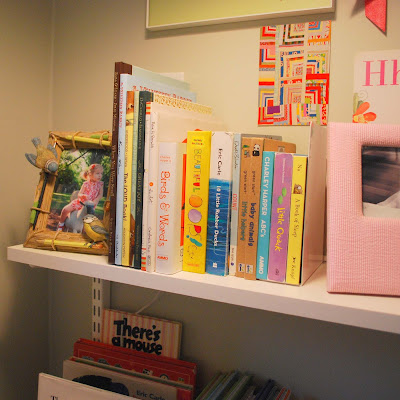 The bottom ones solve two issues – the first was the books were always toppling over onto the desk.  The second was the issue of the bin getting shoved over the side of the desk.  Sometimes there’s just some mad coloring go on down there and you never know where things might end up. 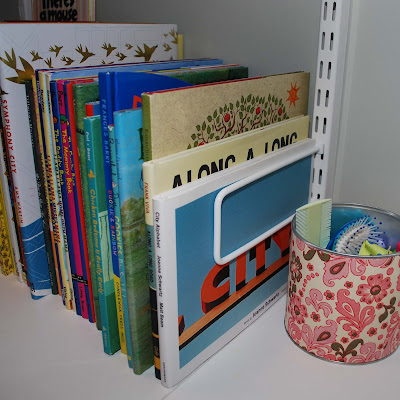 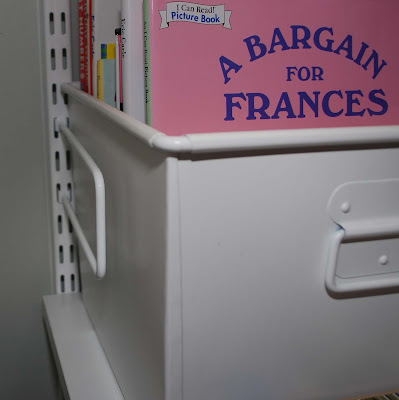 Two simple components for this system that work really well.  I feel a lot better having some breakable (and meaningful) objects on that upper shelf, like hand painted picture frames and coin banks, now that I don’t have to worry about nearby books toppling over like dominoes.  Now I just have to worry about them toppling because of curious hands…