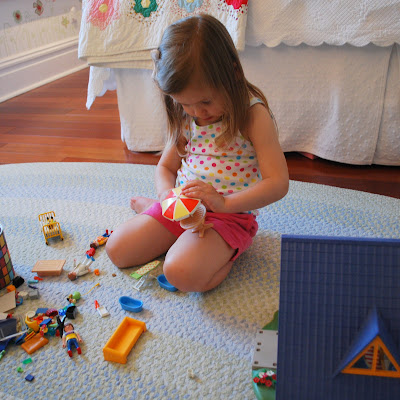 I’ve been noticing a big change in F when her sister is not around.  When they are together, in their best moments, they play and interact so well together.  But what often happens is this:  things are moving along just peachy as they construct a fort out of every available chair, blanket and pillow, items are moved in, stages are set, characters emerge – and then it happens.  F will do something particularly adorable (in E’s eyes) and so an involuntary reaction occurs with the older one.  She swoops in and grabs her little sister, hugging her tightly or kissing her very kissable cheeks, and then it all comes crashing down.  F wants her space when she’s playing.  She’ll play along, but don’t mess with her in the process.  And for Pete’s sake – don’t kiss her while she’s playing.  Nothing good ever comes from forced affection.
So when her big sis takes off with Dad for awhile, the first place she wants to go is E’s room.  Out comes the playmobil – and she delights in the joy of an hour of freedom, with no one dictating the play or squeezing those delicious arms, baby soft as they might be.  I just sit back and watch this transformation in amazement.  The first child has complete control of their personal space – to play alone, or to climb into a parent’s lap when closeness is desired.  It’s a harder fought battle for #2.  I think she realizes this, and revels that much more in the slices of individual space that she sometimes gets.  And I love watching who she is in these moments – I’ve missed them of late by having to work again on Fridays.  I have to work – much like her sister does – to not swoop in and join the fun.  She needs this time to do her own thing, be her own master of play.
But gee whiz, it’s hard not to try and sneak in a snuggle when she’s that delicious age of two – part baby, part fascinating, growing child.  I know exactly how her big sister feels.