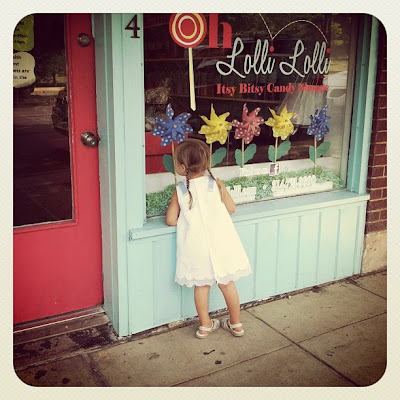 We nixed the idea of going candy shopping for the party yesterday after we baked in the heat for an hour or two at the market and wading pool.  Instead, we opted to go today, after baking in a church with non-working A/C and then picking up lunch at a restaurant with might-as-well-be-non-working A/C.  The thermostat read 90 degrees in there as we quickly changed our order from dine-in to carry out.  I’ve never been so glad to be back home again.  We’re parched over here.
Interjecting a little color – while keeping our cool – was on the docket for pre-nap.
We had eighteen tubes, so I decided the easiest way to do this was to take in one tube to the candy store, pick six colors, and then have them measure out three tubes worth, weigh it, and fill the other five colors to match. 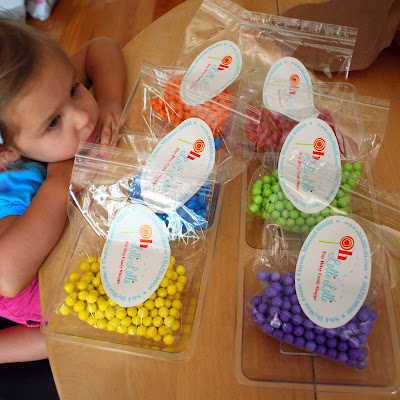 F particularly loved dumping them out into these trays.  Surprisingly, we only lost one onto the floor.
“Please I may eat that one?” she asked.  I hestitated before answering yes – not because my kitchen floors are currently less than pristine (because they are), but because I had to consider the real possiblity that a “yes” answer would encourage many more dropped candies.  Responding with a “no”, followed closely with a “in the trash”, would likely encourage the opposite.  Then I remembered these sixlets were $7 a pound and scrapped all motherly decency and let her enjoy.  We ended up dropping very few in the process (shocker), but she did ask me about every eleven seconds if “I please may have one more?” – over and over and over again.  I love the way she phrases her requests – shuffling the words around makes them much more endearing.  For the first time or two, at least. 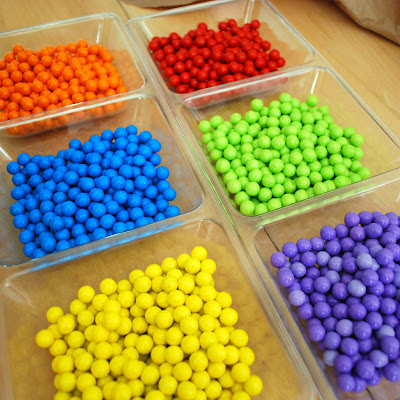 We did a test run and counted up the number we’d need to get a balanced rainbow.  Fifteen of each color was the final verdict.  And then the counting began.  If she didn’t have 1-15 down by now (sometimes she jumps from 12 to 14) she certainly has it now.  Progress was slow, but fun.  (Minus the aforementioned question every 11 seconds.) 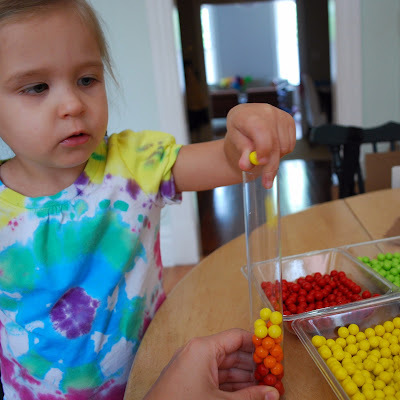 After about half of them she was slowing down a bit (and dropping more), so I did the counting of the first five colors and she topped them off with purple and then the lids.  I like the fact that you can see the colorful streamers I was cutting last night while watching Mad Men in the distance in the photo above.
And then there was some very careful final counting in the end.  And some counting of days too – eight more days until she’s officially three, and thirteen more until she can celebrate it with friends and family.  We’re almost ready – but as always – getting there is the very best part of it. 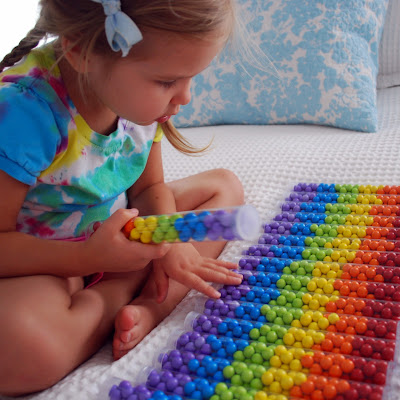