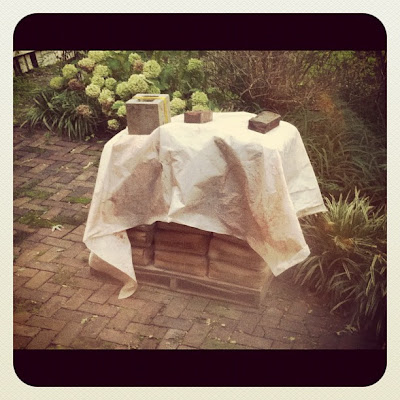 That would be a lot of mortar above, hanging out and waiting for tomorrow.
Masonry work began on our house today (well, at least the supplies were delivered) and will continue for the next week and a half.  This is the kind of expensive non-glamorous work that no one really likes to do, but it’s got to be done.   It’s messy and it’s largely invisible to the rest of the world – as one of my friends puts it – there’s just no gratisfaction in it.
…..
Let’s take a little trip down memory lane, shall we?
Here’s the back of our house in January of 2000.  Isn’t she gorgeous?  Can’t you see why we fell in love? 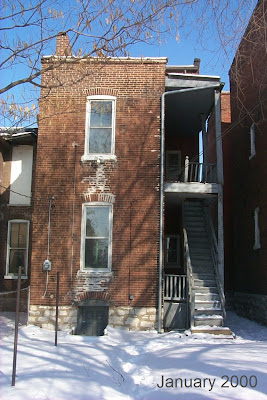 It is a big hot mess, that’s for sure.  The wooden stair and balconies were about two strong wind gusts away from toppling over, and the years of roof neglect along that south edge of the parapet wall had allowed a lot of water into that masonry wall.  The result was some serious window rot and failing masonry above and below the windows.  I think the previous owners might have hired some tuckpointing at the very top, but I’m pretty sure a complete idiot novice tried to patch things up underneath the windows.  It looked like someone had filled a giant pastry bag up with gray cement and piped to their little hearts’ content.
The front wasn’t exactly winning any beauty contests either.  And ignore that strange date on the side of the photo below – it was most certainly May 2000.  You don’t take out thirteen tons of plaster with your own four hands (mine and M’s – I don’t have four hands) without having the memory – and the date – seared into your brain. 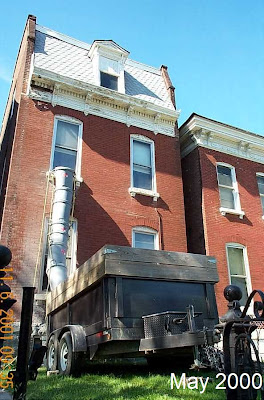 Eventually we had the front facade, the back facade, and a portion of the two side elevations tuckpointed (by pros, not novices).  It was pretty fun watching them hang from the top of the wall in between our house and the neighbor’s – it’s far too skinny for scaffolding – maybe three feet or so there.  The brick was looking better, and we were painted and patched and had a downspout again.  And look – a super stylish mailbox strapped to a street warning light.  I can’t even remember the story of how that got to be in our yard, and holding up our mailbox, but I’m sure there was a story there. 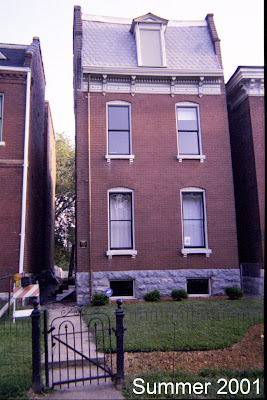 More tuckpointing again in late 2003, those areas on either side of the new slate and copper roofs, and now we also had a rebuilt dormer.  You can still see the unfinished walls inside the window.  We were working pretty hard on the attic at that point, finishing off a nursery for the little one that had just moved in. 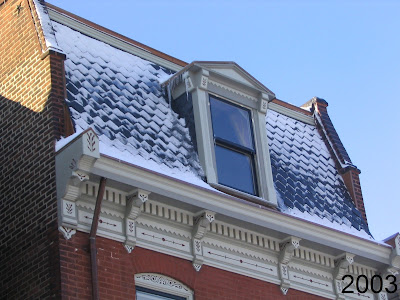 Fast forward nine years, and we now have some areas at the back of the side walls that need addressing – and we also have a nine-year-old.  Funny how that happens.  So even though this work needs to be done – as well as the new flat roof that’s coming as soon as the mason is done –  no one can see it, so it’s not nearly as satisfying to do.  Just another joy of homeownership – it’s inevitable, whether your house is 5 years old or 125 years old.  Man, that’s old.
In good news, the painstaking prepwork and painting that we did on that cornice and our windows have really paid off.  I’m sure we’ll be erecting scaffolding sometime in the next few years, but we’re eleven years into that paint job and it still looks great.  Nine years into the dormer paint.  And that slate roof and copper dormer – they’ve got another 91 years in them.  We’ll happily turn that task over to someone else!
…..
If you want a real visit down memory lane, check out the rehab slide shows or just click on the black and white image of the dormer in the sidebar.  There are nine slide shows, and they cover the first eight or so years.