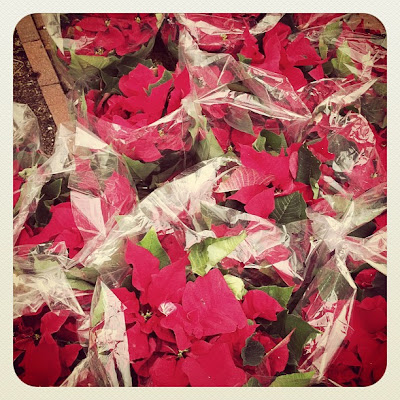 There are so many, many ways that the littlest one among us is growing up.  It is in the language that she used just today with me.
“I suppose…”
“the lesser number…”
“…and wouldn’t you know?  I thought it up in my own head…”
That last one is a new addition and I love it.  Her voice gets really high pitched and excited as she explains something that’s on her mind and then she holds her hands to the side, palms upturned and exclaims “I thought that up in my own head.”  She even shakes her head a bit in disbelief because, really – what a three-year-old is learning and doing and absorbing and connecting is unbelievable.  This is our second go-around, and it’s no less amazing than the first time.
Our church is undergoing a major renovation and so half of the building is now completely inaccessible.  Practice space, classroom space, meeting space, eating space – it’s all in one space now.  (Those poinsettias above are the ones the girls and I picked up yesterday for the tables at our annual Christmas dinner.)  So this year they did a much pared down Christmas program – and while we knew E had been practicing the songs for the show – we did not know that they would invite all the children to participate in the parade portion.  Once that announcement was made, F was off like a shot.  And while the Christmas story was narrated, the children paraded through the dining hall with various hats and props on.
F was in her element.  She paused and grinned each time she passed us – so pleased with herself and her gumption. 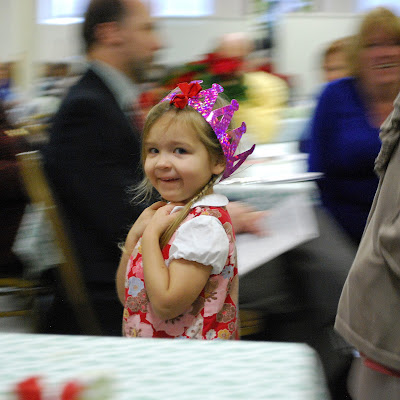 The rehearsed portion of the program involved all the kids singing on the stage, and so they made their way up the stairs with F in tow.  Her older sister quickly leaned down to tell her that her part was over, and she exited the stage and ran to me, barely holding back the tears.  “Why can’t I sing?  Sissy says I can’t sing, but I can.”
The music leaders looked at me and shrugged – it was more than fine with them if she joined in – so she climbed right up to the center and proceeded to fake her way through the whole thing.
She may have known most of the words to the first stanza of each song, but she certainly didn’t know the second and third verses.  But she mouthed the key words, and once The Little Drummer Boy rolled around she pa-rum-pa-pum-pum-ed with the best of them.  With vim and vigor you might say.  I cried, I laughed so hard. 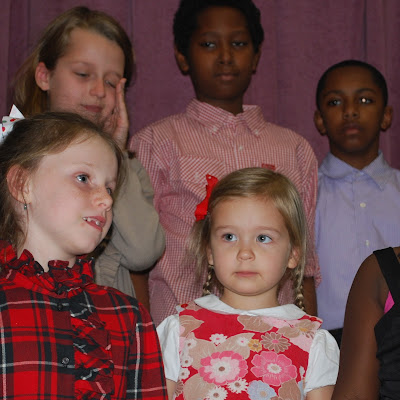 Singing wiped her out, and after a power nap, we headed over to a local ice rink to see The Nutcracker performed on ice with E’s girl scout troop.  The girls loved it, but E especially.  She’s ready to put on some ice skates again and take a whirl around a rink.  Before the show started the skaters came around to sign autographs. 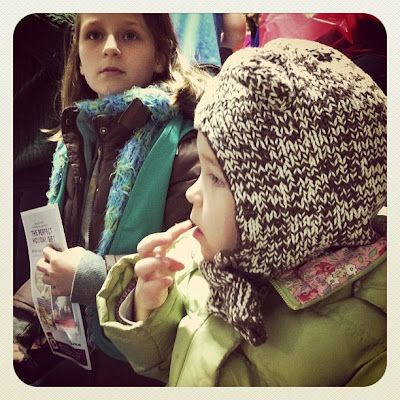 That was a big hit with E – but the little one wasn’t as interested in the names.  She was just really into that program.  She wants so badly to know what all those words say.  She knows there are stories just out of her reach, and she’s going to figure out how to decode them soon, just you watch.
Where there’s a will, there’s a way.
Especially if it involves a stage. 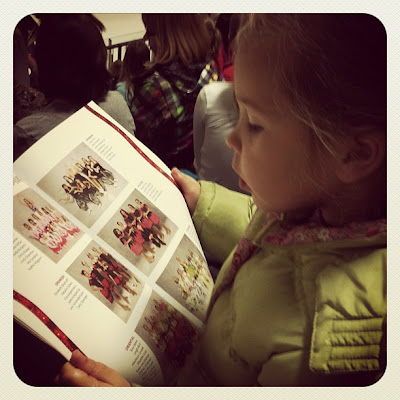