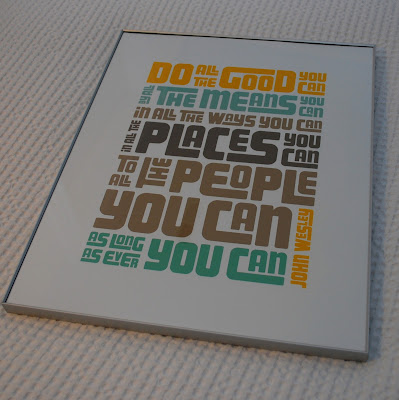 I’ve never really been the sort of person who hangs posters or prints around the house with pithy phrases on them – at least not much past grade school when I’m sure I had some Scholastic posters taped to my closet doors.  And then one day – quite out of the blue – I purchased this print by Logophilia.  It’s a quote by John Wesley, who is credited for founding the Methodist movement (the church to which we belong), and it’s one that I’ve heard and seen for years now.
Do all the good you can
By all the means you can
In all the ways you can
In all the places you can
To all the people you can
As long as ever you can
-John Wesley
I bought it back in October, in the middle of all the political discourse and debates and constant, constant talk.  There was something about it that I appreciated, and I felt like having it in my house, reading it each day, having my children read it and remember it, even when older.
Wesley has many great quotes attributed to him.  Some other good ones:
Think and let think.
…..
We should be rigorous in judging ourselves and gracious in judging others.
…..
And one that always gives me great hope:
What one generation tolerates, the next generation will embrace.
I particularly enjoyed these last fall as the election neared…
I met those of our society who had votes in the ensuing election, and advised them
1. To vote, without fee or reward, for the person they judged most worthy
2. To speak no evil of the person they voted against, and
3. To take care their spirits were not sharpened against those that voted on the other side.
…..
Though we cannot think alike, may we not love alike? May we not be of one heart, though we are not of one opinion? Without all doubt, we may. Herein all the children of God may unite, notwithstanding these smaller differences.
I believe my favorite is “We should be rigorous in judging ourselves and gracious in judging others.”  It reminds me of being a child and being told to give someone the benefit of the doubt, or to not be quick to judge.
I don’t believe I’ll be plastering the walls with quotes moving forward, but I’m happy to have that daily reminder of doing “all I can” in every way.