I asked earlier what cake might have to do with primer?  Brace yourself, it’s a bit of a reach. 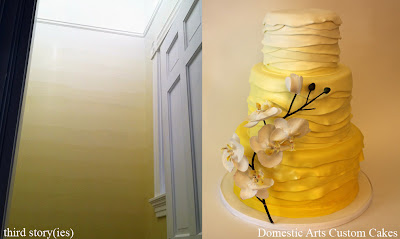 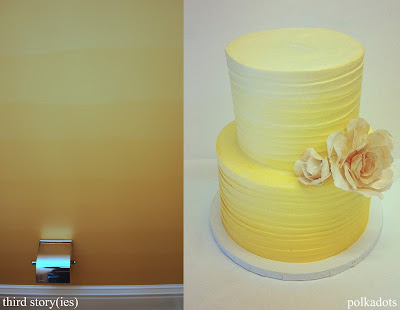 I’ll back up a little bit.
A few months ago E and I were talking and I showed her a picture of cake and told her that it gave me an idea about how I wanted to redo the half bath on the main floor.  It wasn’t just the cake that started the ball rolling – it was a combination of that image as well as the painters tape contest that Design*Sponge hosted awhile back.  This image to be precise: 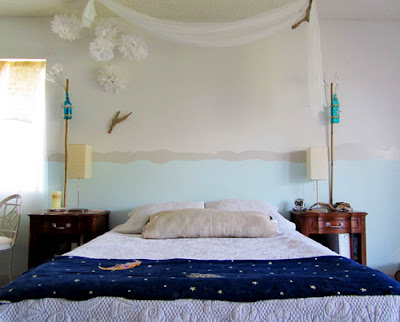 Those colors were produced by ripping painters tape in place to create the rippled edges, and I started thinking about several things at once.  As we slowly redo and repaint the rooms on the first floor, I knew that I wanted to get rid of that old eggplant color in the bathroom.  I wanted to brighten the room up, and I knew that in a small space like that I could get a little punchier with the color.  I was leaning towards a deep gold, and Sherwin-Williams’ Anjou Pear was my favorite gold.  But I also know that a little yellow goes a long way… a long way towards looking like a school bus parked in the loo.  But if I started with a deep gold and slowly but surely worked my way up to a glossy white at the top I could get all the glory without all the gaudy.  All it took was some matte gold paint, some white semi-gloss paint, a paint brush, a roller, a lot of plastic cups, a syringe and quite a bit of painters tape.
Oh yeah, and a fair amount of crazy and patience.  I also aged my hands ten years by washing out tools thirty times in seven days. 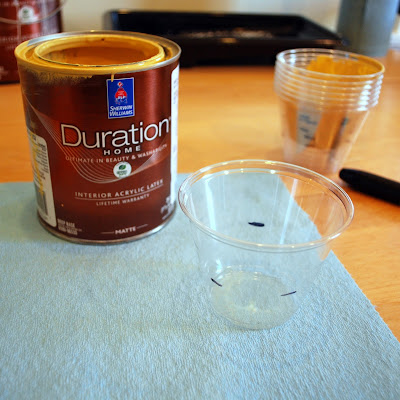 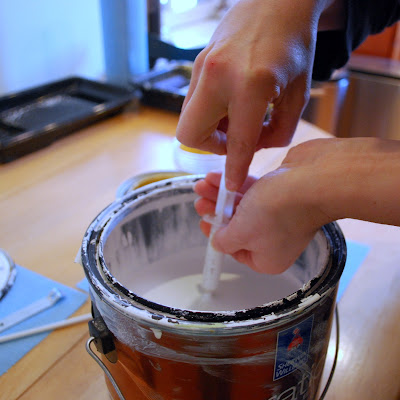 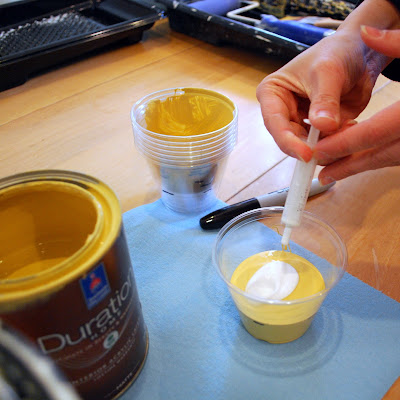 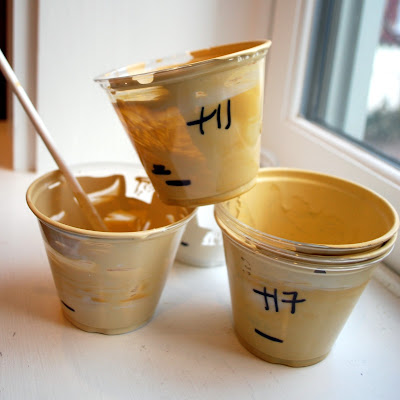 E’s been asking me for months when we could start on this project.  I had high hopes of doing it over the winter, when we were stuck indoors with extra time on our hands.  So it was perfect for a Spring Break project because it’s most decidedly still winter in these parts.
Before we got to the fun stuff, we had to spend an hour or two prepping the room – cleaning and removing cover plates, taping and covering up everything that couldn’t be removed.  I put E’s finely honed duct tape skills to great use with the painters tape.
Then we broke out the primer – she cut in while I rolled. 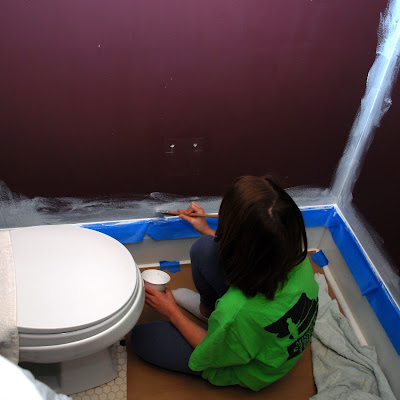 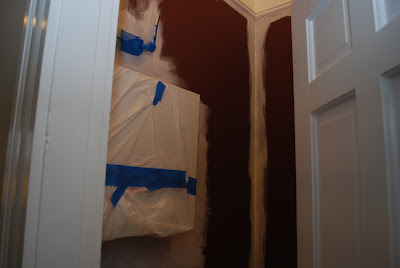 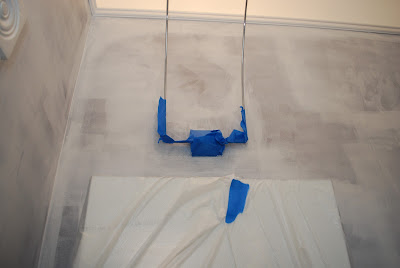 Next we devised our plan of action.  We did some quick math on the overall height of the room from top of baseboard to underside of picture rail.  We determined our layers would be 5″ tall, although the actual height varies a lot because of the irregularity of the stripes. 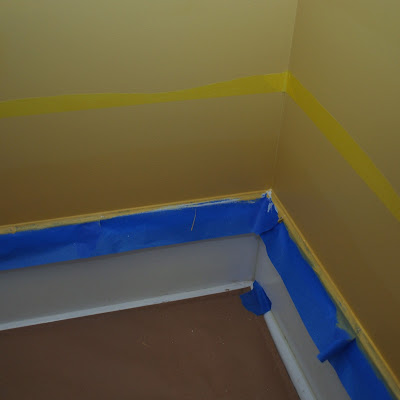 Starting at the bottom with straight gold, E cut in above the tape and I rolled about two feet of the wall.  I knew that it was going to take at least two coats of the gold over the primer since the base coat was so dark, and so instead of painting each layer twice, I just over painted each layer.  That way, when I masked off the next layer above I could paint right over the previous color – just a tiny shade lighter each time. 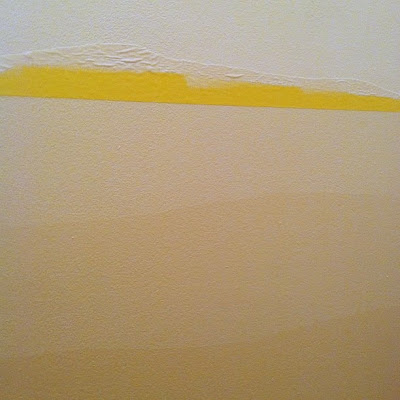 Of course this was a very slow process because the paint had to fully dry before I could mask off the next layer and paint.  I managed to do around 4-5 layers in a full day, and if I came straight home from work and did one before dinner I could get two more in before a late bedtime.  I worked again all day Saturday and Sunday, and even got the trim repainted – 95% of it.  I’ll finish the rest up tomorrow night.  Tonight I just needed a night off from painting. 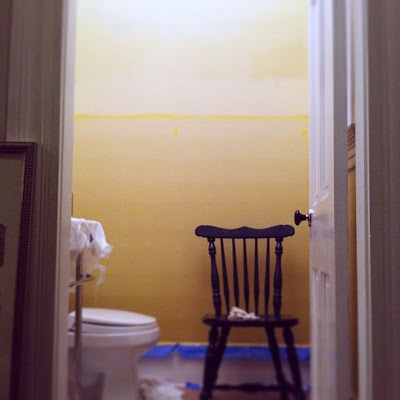 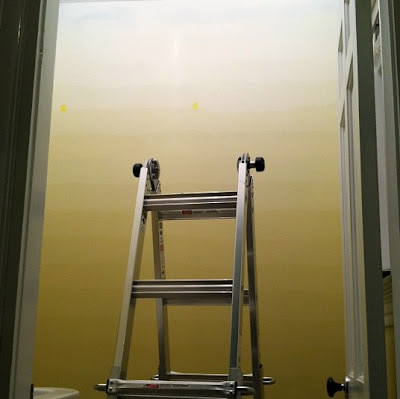 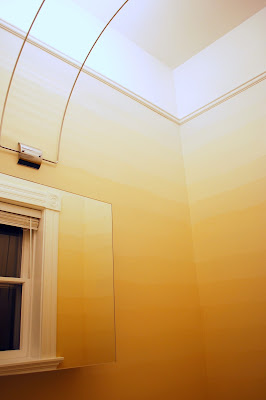 It’s not the easiest room to photograph, and it’s also hard to get enough contrast in the photos to show the layers and not blind you with the yellow.  Some of the photos taken at night really seem to glow, but in person the gold is really subtle, and the graduation in color is so cool.  I love the lightening affect as it goes up, and I repainted the ceiling and above the picture rail with semi-gloss white which brightened things up even more.  I love how the mirror and the light fixture and even the faucet stand out so much better now with a lighter background. 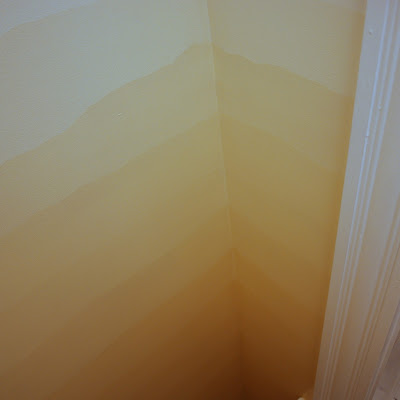 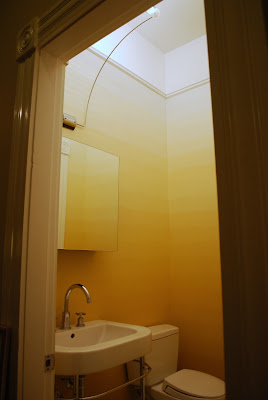 And I really love coming down the stairs in the morning when the sun is coming in through the window and the wall looks like a piece of art.  I’m sure there’s a perfect thing to hang there on that wall against the gold background, but it might be awhile before I settle on something.  Right now I’m just enjoying the view and I’m glad that E and I finally tackled this project and survived. 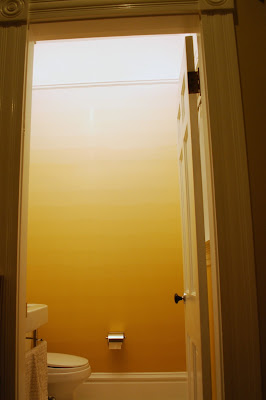 10 thoughts on “icing on the cake”