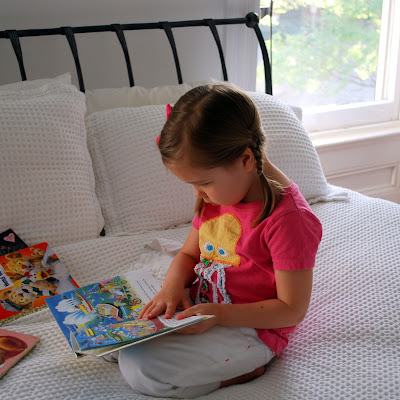 When it’s quiet in the car, and it’s just the two of us, F quizzes me on math problems.  I’m not sure how this started, but she loves numbers, and she calls out addition problems, one right after the other.
“What’s two and three?”  “Five.”
“What’s five and three?”  “Eight.”
“What’s eight and thirty-three?”  “Forty-one.”
On and on and on.  It doesn’t bother me because – first, it’s not whining, and second, every once in awhile she’ll discover something interesting in a number or the patterns.  One day she kept asking me what various numbers plus one make, and after several of those questions she suddenly declared that she saw the pattern – when she added one to any number she got the next number in line.  Then she took over adding one to everything.  Seeing those kind of connections happening makes all the math drills sort of worth it.
And I like the occasional non-number like “What’s two and sixty-four-eighty-one-hundred?”
The other day she asked me a few problems in a row (and some duplicate problems) and they all added up to four.  Then she declared “Ha!  There are so many ways to get to four!  Just like me!”  And she’s right – she’s all about getting to four.  There’s non stop talk of summer around these parts and they all center on that magical birthday four in July.
…..
Speaking of summer birthdays – over the course of a few weeks this summer we’ll have one “four”, one “ten” and one “forty”.  4×10=40.  How’s that for some birthday math for you?
…..
I love the words she uses when she talks – particularly when she’s trying to explain something with a lot of emotion behind it.  She’s a sponge for vocabulary and phrases that we use around the house, even if she doesn’t always pronounce them correctly.
When she’s struggling with something on her own, she’ll let out a tremendous sigh (or yell) and declare to the world just how frusser-rated she is!  Some things she tries out are just re-dick-a-luss – that one always sends us into giggles (which frusser-rates her to no end).  She’s often con-sten-trating on something, so don’t bother her, and I hope it’s a long, long time before she stops pronouncing lemonade, lemo-lade.
Yesterday I had some pants out to go with the octopus shirt she wanted to wear, but she nixed those and said she wanted to wear capri pants.  I pulled out some white ones from the drawer and brought them over to where she was getting dressed.  My mud-loving, marker-loving, stain-loving little one took one look at those pants and declared in her wry, sarcastic way “Now that’s a disaster waiting to happen.”

4 thoughts on “numbers to remember”