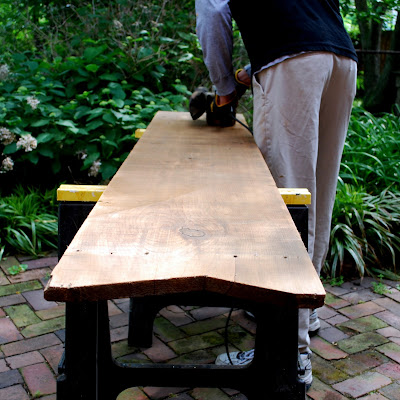 Several weeks back I posted a photo on Instagram of this big beautiful piece of wood being sanded down for our studio desk.  But I haven’t shared the old photo that shows its previous life.  It’s not a great photo – it’s dark and blurry – but you can see the old pine wardrobe that was in the attic when we bought this house thirteen years ago.  It was sitting in the corner of the back half of the space – there was a dividing wall of vertical pine boards that split the room into two.  This was likely because the attic was shared by both tenants in this former two-family flat.  M salvaged those vertical pine boards (although I thought he was crazy to do it), and later he sanded each one down and we installed them horizontally on E’s front wall.  He also salvaged those wardrobe side pieces because (at least one side) was a single pine board – you rarely see wood that wide, wide enough to form a complete desk. 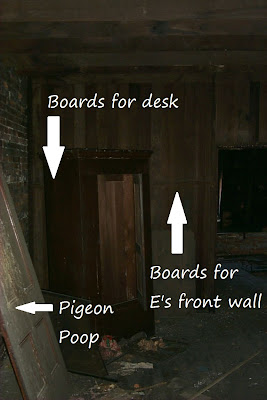 (You can also see the various pigeon remains on the floor, as well as a good amount of poop on that door leaning to the side.  It was gross.)

In 2008 M sanded down one of those salvaged wardrobe pieces and made me this desktop for the room that would later become F’s nursery. 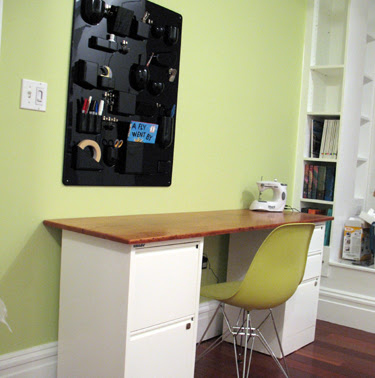 And then we started working on the back room on the second floor and knew we wanted to stretch a desktop across the entire width of the room.  Enter that old wardrobe wood – and the second half of this desk was born (reborn?).
The photo below sort of exaggerates the color difference between the two halves, but they look a lot closer in color in person.  I kind of like the dividing line – we can keep our stuff on our own sides.  (Who am I kidding?  I’m the one more likely to stretch my stuff across the entire length.) 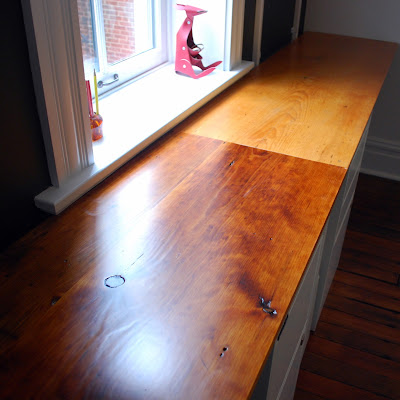 We still need to design a center console to help support the middle joint – the rest of the span is supported by four brackets on the Elfa system we have in there.  We’ve talked about housing the printer there, or the sewing machine – we just need to make a decision and then we’ll know the final spacing.  I’m leaning towards putting the printer there, off the desktop but still easily accessible.  The sewing machine is easier to move around in its case and store when not in use. 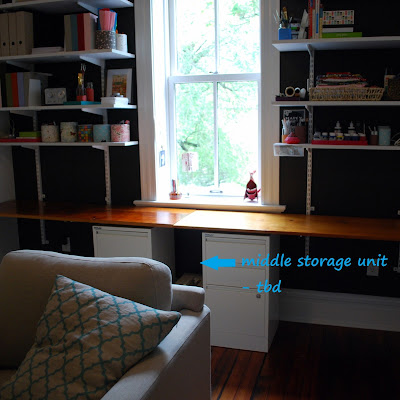 One of these days we’ll get the computer moved back here, and a few last things mounted to the wall, but it’s coming along, this space.  As gross as that attic might have been in the beginning, I’m certainly glad we had the vision (and the guts) to see the potential there.