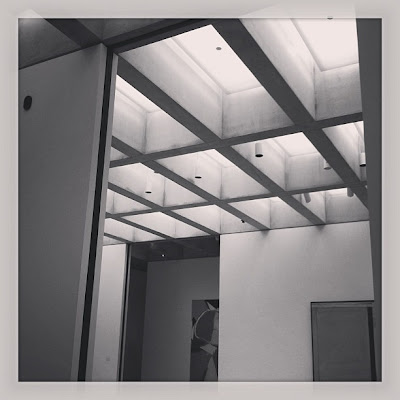 This weekend was kind of a mixed bag for me. I love that E is old enough to enjoy extended visits with her grandparents and cousins, but by the end of those weeks I think I’m missing her more than I even let on to myself. The boot on the foot was really starting to be a drag (completely literal there), and the physical therapy sessions have been ninety minutes of some serious work. A part of me sort of loves the fact that I’ve got an hour and a half of a PT’s focus on my strength building, but it (and the crooked boot walk) were really starting to wear me out. It’s been gorgeous with a capital “G” here, and all I want to do is go for a long walk, or better yet, a long run, but instead I’m doing clamshells on a vinyl wrapped table in a rehab space. M and I started off last week with a late night work session for a project we’re helping out on at school, and I always find it’s hard to recover from a big out-of-state weekend trip and a couple of late, late nights with much grace intact. By Friday night I was wiped.
I try to go into the weekend with a better attitude, but I’ll admit it was a bit of a struggle. I took the boot off for a bit at home (as instructed) and it hurt. That was completely discouraging. I put the boot back on so that we could make a quick trip to the mall to hopefully see the side tables we’ve been eyeing for awhile now at the newly opened West Elm. They didn’t have any, and guess what?  They are phasing them out, and so our plan to slowly purchase them isn’t really a plan at all.
The easy solution to this? Buy them now. But it’s not that simple, at least not for me.
I was trying to describe this to a friend, but it’s not a really easy thing to describe. It sort of boils down to this: I don’t like to shop. I’m pretty particular about what I like and what I don’t like, and if I’m going to spend money on something then I want it to be the right thing. I’d rather do something once, and do it right. If you’ve visited my house you probably can understand this – I’d rather live in an unfinished project then spend time and money on some stopgap method. I’d rather find one perfect pair of shoes and wear them all the time, until they are worn through, than have a closet full of shoes to choose from each morning. But the flip side to this personality quirk is that everything feels so undone, so incomplete, so temporal.
So I found myself annoyed, and annoyed at being annoyed. And annoyed by my foot, and my overtired child in the backseat, and the missing child in the backseat, and all the various things in my life (spoken and unspoken) that make me feel like I’m treading water. The weight of the world was on my shoulders, and I have no right at all to even call it the weight of the world because what do I know of real weight in this insignificant conversation about coffee tables and over abundant healthcare and living (and loving) grandparents for my children?
Sunday could have gone two ways. M left in the morning to pick up E, and so the day stretched in front of me without an agenda. The possibilities were limitless, particularly after the gift F gave us that morning in sleeping in until nine. Nine, nine! I laid there on my pillow in a quiet house and listed the things I might do that day. There are many, many things that fit neatly into seven or eight unscripted hours, if I was careful not to script them. But I then decided to go the opposite direction, filling those hours with no-agenda items (outside of finding a parking space). The two of us went to church, and then to brunch, we dropped peaches and blackberries at a friend’s house and headed to the art museum for awhile. We sat in one of the galleries and she worked on a kinetic sculpture for an hour, not letting me help one.little.bit.
I can do it, don’t you know?
I know, I know. 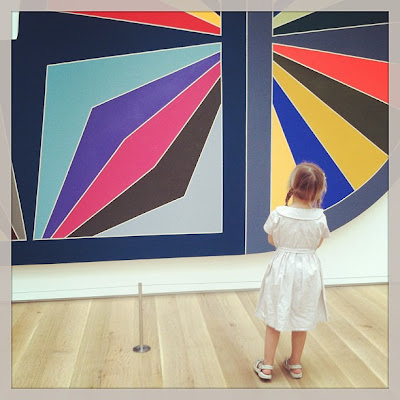 All day long, everywhere we went, people smiled at her and commented on her sweet dress. Precious, darling they would whisper smile to me while watching her stand on tiptoes, staring into that bakery cabinet full of cupcakes. What a doll they would say, watching her little body stand in front of a giant painting, arms stretched out wide, taking it all in. Occasionally they would say it directly to her. What a cute little girl, are you having fun at the museum? She will usually answer, and (with prompting) say thank you for the compliment. 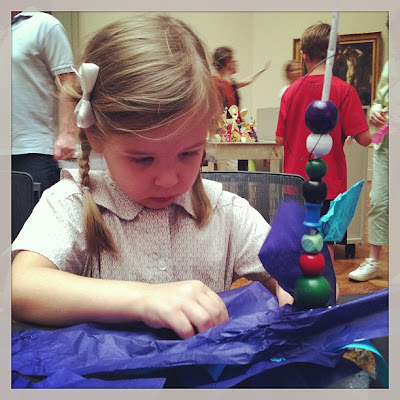 She finished her sculpture and declined to let it sit and dry, choosing to carry it by the glue-sticky, tissue wrapped base. She walked through the remaining galleries with her work in her hands, stopping when I stopped, but not looking at what I was looking at, only staring at her own sculpture in her hand.  There was this moment where I was reading something on the wall and I turned to see four older women gathered around F who was standing in the middle of the space, contemplating her piece that she had placed on the floor a couple of feet in front of her. You are so cute they said, beaming down on her from above. Thank you she said but do you like my sculpture? 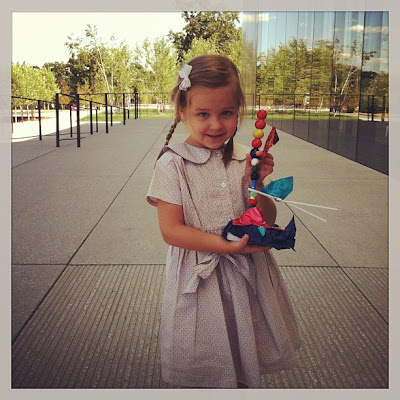 There are these moments when I catch my breath because the depth of my love for this child – for both of them – is almost too much to bear. Watching her work on her own, watching her step back and assess when her work was complete, watching her regard it from a distance, watching her thanking a complete stranger for the compliment but then dismissing it slightly – it’s okay that you find me cute, but have you seen what I can do? what I can make? Ahh, it was just what I needed, the perfect moments to fill that open day. 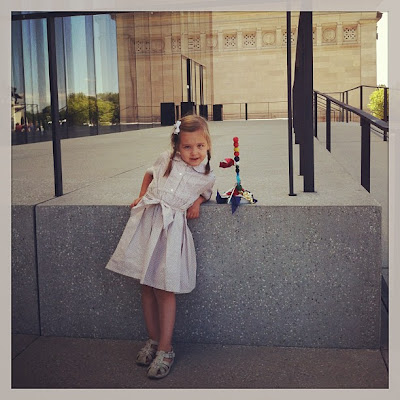