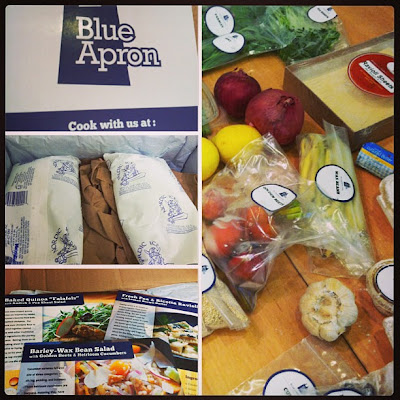 A co-worker and friend recently tried out Blue Apron – a dinner delivery service that ships you weekly recipes along with all the fresh ingredients. I’d heard about it via a couple of different blogs like this one, but I didn’t realize that they’d opened new delivery areas, including ours, until my friend received an email one afternoon in the office. She had tried it out on her own, and the company is trying to expand its customer base in our area, so they emailed her and offered her three free weeks to give to friends. Luckily, there just happened to be three other people sitting right next to her that like to cook and eat. So we signed up.
My first impression was… interesting. I’m not completely sold, though. The first meal was okay, but there were several factors that went into that so-so take. One was trying to come home after work and make ravioli from scratch. Sure, I didn’t have to measure out the ingredients, but still. Fresh ravioli on a good day is a weekend affair for sure, so I’ve only got myself to blame for trying it on a Wednesday.
The other two days got much better, and the third meal was outstanding. My friend’s free gift to us was for one week (three meals – either vegetarian or meat) for two people. I chose veggie, and I found the portions pretty true. Which was sort of a turn off for me too. Again, I love, love, love to cook, but when I do, I really like for it to produce leftovers. I’m not a PB&J kind of lunch girl. I like to heat up a plate for lunch that looks as good as dinner did the night before. I could always up the delivery service to four servings, but that would be $120 a week, which is a little steep. (It’s $10 a serving / a meal). 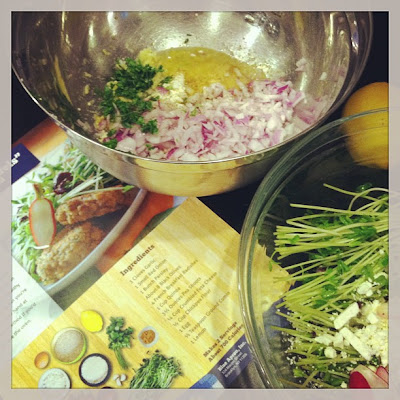 It’s also a LOT of packaging, even if it can be recycled. The packaging is so cute, but still – it’s a lot and sort of guilt-inducing. I do really like the fact that you get the amount of each ingredient that you need – so you can try a really unusual recipe that might have several obscure spices, and you don’t have to spend a fortune buying large bottles of each one. It’s pre-measured, and it’s delivered to you – both are super convenient, no lie.
My friends have also tried the meat ones, and I think one of those meals is usually fish or seafood. You do get to see the menus ahead of time, so you can skip weeks if they don’t really appeal to you. I think this would be a great idea for a small household of food lovers – particularly if you like to cook, but don’t really like hunting for good recipes and hunting down the ingredients. For $60 a week you get three really nice at-home meals, and that’s probably not too far off what you might spend at the grocery store for the same thing (especially meat and fish). I think I’ll probably stick with my old routine – I actually enjoy finding and trying out new recipes, but I’d like to do this once every other month or so – just to keep things exciting. You get three new recipes out of the deal, and I know one of those will be a definite repeat at our house.