So, yeah.  You thought I just threw in the towel right?
I guess you could say I have a million reasons why I’m behind on my personal challenge this year to knock a few of the nagging, lingering things on my to-do list.  But I really just have one:
Week ten:  replace old computer.

And I know this isn’t exactly a news flash or anything, since I’ve been complaining about the old one for awhile and I’ve been blaming some of my lagging posts on this whole transition.  But it was a big one.  Our computer was almost nine years old, which in dog years is sixty-three, and in computer years is ancient, mind-numbingly slow, and cantankerous.  The computer we had before that one was probably the size of a small house, and the one before that was operated by Fred Flintstone and involved papyrus scrolls.  And an abacus.  You get the picture.  We were so very, very out-of date.
We (as in my husband, not me – what a laugh!) rebuilt the thing a few times and eked a bit more life out of it with each retooling.  But when the process of uploading a photo, cropping, saving, a bit of typing and then publishing for the smallest of blog posts sometimes took well over half and hour (!), I had become very adept at multi-tasking during the process.  Many a pile of laundry has been folded on the bed behind the computer.  I think I made a cake once that took less time than a good “saturday in the garden” post loaded with pictures.  M did the taxes one last time on the thing.  And the cursing wasn’t from the taxes.  It was dreadful.
We had taken to working on our individual laptops from work to be more efficient, but mine was really a borrowed one, and heavy to drag back and forth along with a toddler.  And usually when we opened those we just felt compelled to keep working, and lord knows we’ve been doing way too much of that around here lately.  It was time.  And that time coincided with a special work discount from Dell.  So we jumped.  We ordered it, and then a couple of weeks later it arrived.  And then it sat in the box for a couple more weeks because we were out of town and too busy.  And then it took another week or two to set up and transfer everything, and load software, etc, etc…  And then it worked beautifully (angels singing beautifully!) but we still didn’t have the printer / scanner set up.  Then it was, and then the computer died.  Like made a sad, sad sound and died.  While catching up on bills.  Enter a computer tech, a new motherboard and power supply, and it was working again.  Another week or two and the printer / scanner is back up and so I can now officially state (knocking vigorously on this very wood desk where I sit typing) that we have replaced the old computer.
And now I can also scan my little 52 projects headers and catch you up to speed.  It feels good to cross off “list crossing-off” from my list.
While I was typing this up I thought I’d take a photo of the new computer (a Dell xps studio – same computer I have at work).  I took the photo, uploaded it, made it look like a goofy old Polaroid from the seventies in Picasa, uploaded it to Blogger – all in under three minutes.  I think I’ll be getting a lot less laundry folded from now on… 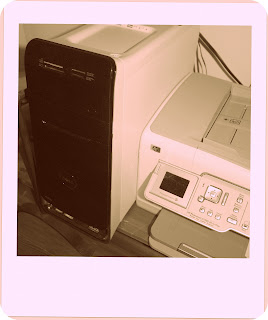 And here’s the last header, which has found its rightful home on the last post: